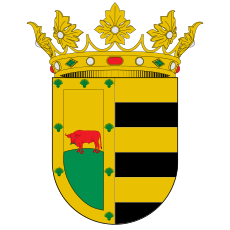 Coat of arms of the dukes of Gandía. 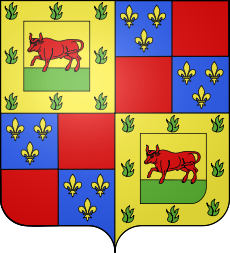 Coat of arms of the dukes of Valentinois.

The House of Borgia (/ˈbɔːrʒə/; Italian: [ˈbɔrdʒa]; Spanish: Borja [ˈborxa]; Valencian: Borja [ˈbɔɾdʒa]) family became prominent during the Renaissance in Italy. They were from Valencia, the surname being a toponymic from Borja, then in the Crown of Aragon, in Spain.

The Borgias became prominent in ecclesiastical and political affairs in the 15th and 16th centuries, producing two popes: Alfons de Borja, who ruled as Pope Callixtus III during 1455–1458, and Rodrigo Lanzol Borgia, as Pope Alexander VI, during 1492–1503.

Especially during the reign of Alexander VI, they were suspected of many crimes, including adultery, incest, simony, theft, bribery,[citation needed] and murder (especially murder by arsenic poisoning).[1] Because of their grasping for power, they made enemies of the Medici, the Sforza, and the Dominican friar Savonarola, among others. They were also patrons of the arts who contributed to the Renaissance.

The Borja or Borgia emerged from Valencia in the Crown of Aragon, Spain. There were numerous unsubstantiated claims that the family was of Jewish origin. These underground rumours were propagated by, among others, Giuliano della Rovere, and the family was frequently described as marranos by political opponents. The rumours have persisted in popular culture for centuries, listed in the Semi-Gotha of 1912.[2][3][4]

Alfons de Borja, later known as Pope Callixtus III (1378–1458), was born to Francina Llançol and Domingo de Borja in La Torreta, Canals, which was then situated in the Kingdom of Valencia.

Alfons de Borja was a professor of law at the University of Lleida, then a diplomat for the Kings of Aragon before becoming a cardinal. He was elected Pope Callixtus III in 1455, at an advanced age, as a compromise candidate and reigned as Pope for just 3 years.

Rodrigo Borgia (1431–1503), one of Alfonso’s nephews, was born in Xàtiva, also in the Kingdom of Valencia to Isabel de Borja i Cavanilles and Jofré Llançol i Escrivà. He studied law at Bologna and was appointed as cardinal by his uncle, Alfonso Borgia, Pope Callixtus III. He was elected Pope in 1492, taking the regnal name Alexander VI. While a cardinal, he maintained a long-term illicit relationship with Vanozza dei Cattanei, with whom he had four children: Giovanni; Cesare; Lucrezia; and Gioffre. Rodrigo also had children by other women, including one daughter with his mistress, Giulia Farnese.

As Alexander VI, Rodrigo was recognized as a skilled politician and diplomat, but was widely criticized during his reign for his over-spending, sale of Church offices (simony), lasciviousness, and nepotism. As Pope, he struggled to acquire more personal and papal power and wealth, often ennobling and enriching the Borgia family directly. He appointed his son, Giovanni, as captain-general of the papal army, his foremost military representative, and established another son, Cesare, as a cardinal. Alexander used the marriages of his children to build alliances with powerful families in Italy and Spain. At the time, the Sforza family, which comprised the Milanese faction, was one of the most powerful in Europe, so Alexander united the two families by marrying Lucrezia to Giovanni Sforza. He also married Gioffre, his youngest son from Vannozza, to Sancha of Aragon of the Crown of Aragon and Naples. He established a second familial link to the Spanish royal house through Giovanni's marriage during what was a period of on-again/off-again conflict between France and Spain over the Kingdom of Naples.

Pope Alexander VI died in Rome in 1503 after contracting a disease, generally believed to have been malaria. Two of Alexander's successors, Sixtus V and Urban VIII, described him as one of the most outstanding popes since St. Peter.[5] 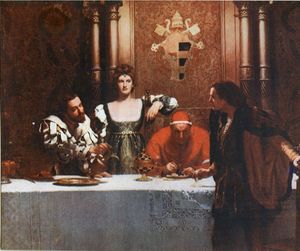 Painting by John Collier, "A glass of wine with Caesar Borgia", from left: Cesare Borgia, Lucrezia, Pope Alexander, and a young man holding an empty glass. The painting represents the popular view of the treacherous nature of the Borgias - the implication being that the young man cannot be sure that the wine is not poisoned.
Main article: Cesare Borgia

Cesare was Rodrigo Borgia's second son with Vannozza dei Cattanei. Cesare's education was precisely planned by his father: he was educated by tutors in Rome until his 12th birthday. He grew up to become a charming man skilled at war and politics.[6] He studied law and the humanities at the University of Perugia, then went to the University of Pisa to study theology. As soon as he graduated from the university, his father made him a cardinal.

Cesare was suspected of murdering his brother Giovanni, but there is no clear evidence to confirm this. However, Giovanni’s death cleared the path for Cesare to become a layman and gain the honors his brother received from their father, Pope Alexander VI.[7] Although Cesare had been a cardinal, he left the holy orders to gain power and take over the position Giovanni once held: a condottiero. He was finally married to French princess Charlotte d'Albret.

After Alexander’s death in 1503, Cesare affected the choice of a next Pope. He needed a candidate who would not threaten his plans to create his own principality in Central Italy. Cesare’s candidate (Pius III) did become Pope, but he died a month after the selection. Cesare was now forced to support Giuliano della Rovere. The cardinal promised Cesare that he could keep all of his titles and honors. Later, della Rovere betrayed him and became his fiercest enemy.

Cesare died in 1507, at Viana Castle in Navarre, Spain while besieging the rebellious army of Count de Lerín. The castle was held by Louis de Beaumont at the time it was besieged by Cesare Borgia and King John's army of 10,000 men in 1507. In order to attempt to breach the extremely strong, natural fortification of the castle, Cesare counted on a desperate surprise attack. He was killed during the battle, in which his army failed to take the castle.

Lucrezia was born in Subiaco, Italy to Cardinal Rodrigo Borgia and Roman mistress Vanozza Catanei. Before the age of 13, she was engaged to two Spanish princes. After her father became Pope she was married to Giovanni Sforza in 1493 at the age of 13. It was a typical political marriage to improve Alexander's power; however, when Pope Alexander VI did not need the Sforzas any more, the marriage was annulled in 1497, on the dubious grounds that it had never been consummated.

Shortly afterwards she was involved in a scandal involving her alleged relationship with a Pedro Calderon, a Spaniard generally known as Perotto. His body was found in the Tiber on February 14, 1498 along with the body of one of Lucrezia's ladies. It is likely that Cesare had them killed as an affair would have damaged the negotiations being conducted for another marriage. During this time rumors were also spread suggesting that a child born at this time, Giovanni Borgia, also known as the Infans Romanus (child of Rome) was Lucrezia's.[8]

Lucrezia’s second marriage, to wealthy young Prince Alfonso of Aragon, allowed the Borgias to form an alliance with another powerful family. However, this relationship did not last long either. Cesare wished to strengthen his relations with France and completely break with the Kingdom of Naples. As Alfonso's father was the ruler of the Kingdom of Naples, the young husband was in great danger. Although the first attempt at murder did not succeed, Alfonso was eventually strangled in his own quarters.

Lucrezia's third and final husband was Alfonso I d'Este, Duke of Ferrara. After her father died in 1503, she lived a life of freedom in Ferrara with her husband and children.[9] Unfortunately, her pregnancies were difficult and she lost several babies after birth. She died in 1519, 10 days after the birth and death of her last child, Isabella Maria. She was buried in a tomb with Isabella and Alfonso.

Lucrezia was a budding capitalist entrepreneur, leveraging her own capital by obtaining marshland at negligible cost and then investing in massive reclamation enterprises. She also raised livestock and rented parts of her newly arable land for short terms, nearly doubling her annual income in the process.[10]

The Borgian era, or the time period when the Borgia family had its greatest influence, started in the early 16th century[citation needed], about the time of the death of Lucrezia in 1519. The Borgia family had influence during the age of the Renaissance and the beginning of the Age of Discovery. This was the era of many artists, writers and rulers who have influenced the modern age.

Gioffre Borgia (1482–1516), son of Pope Alexander VI and younger brother of Cesare Borgia and Lucrezia Borgia, married Sancia (Sancha) of Aragon, daughter of Alfonso II of Naples, obtaining as dowry both the Principality of Squillace (1494) and the Duchy of Alvito (1497).

Although Gioffre was deprived of Alvito after the death of Sancia in 1506, he managed to retain Squillace. He subsequently married Maria de Mila, and passed it on to their son Francesco Borgia.

The Borgia Princes were: Gioffre, Francesco, Giovanni, Pietro and finally Anna e Donna Antonia Borgia D’Aragona on whose death, in 1735, it passed to Bourbon Kings of the Two Sicilies. Living either in Naples or Spain the Borgias ruled their fief through governors.

Not all the Borgias were corrupt or violent. Saint Francis Borgia (1510–1572), a great-grandson of Pope Alexander VI, did not follow his relatives. He had fathered a number of children and after his wife died, Francisco determined to enter the Society of Jesus, recently formed by Saint Ignatius of Loyola and became a highly effective organizer of the still new order. His efforts were effective, as the Church canonized the Jesuit Francisco on 20 June 1670.[11]

Another Borgian who lived after the Borgian era was cardinal Gaspar de Borja y Velasco (1580–1645). Unlike many of his relatives, Gaspar preferred to use the Spanish spelling of Borgia: Borja. He was born at Villalpando in Spain. He was related to both Pope Callixtus III and Pope Alexander VI, and some historians believe that Gaspar wished, like his relatives, to become Pope. He served as Primate of Spain, Archbishop of Seville, and Archbishop and Viceroy of Naples. 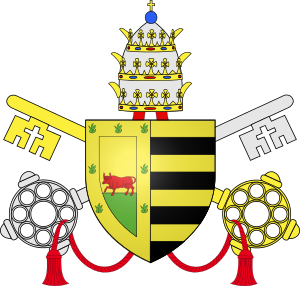 Some historians say that Cesare Borgia murdered his brother Giovanni Borgia, 2nd Duke of Gandia; however there is no clear evidence that he actually did.

There is also the case of Perotto, Lucrezia's lover. When Cesare found out about Lucrezia’s pregnancy, he was so furious that he had the father of the child murdered. The body of Perotto (a young chamberlain, the father of the child) was fished out of the Tiber. Also, the body of a chambermaid was found in the river; she had apparently been murdered for giving the lovers a chance to meet in secret. Both murders are believed to have been commissioned by Cesare.[citation needed]

Lucrezia was rumored to be a notorious poisoner and she became famous for her skill at political intrigue. However, recently historians have started to look at her in a more positive light: she is often seen as a victim of her family’s deceptions.[14]

Portraits of the Borjas and Borgias

The Borgias were infamous in their time, and have inspired numerous references in popular culture, including novels, plays, operas, comics, films, television series and video games.