He was born in Istanbul, a younger son of Sultan Ahmed III (reigned 1703–1730) and his consort Şermi Kadın.[2] Ahmed III abdicated in favor of his nephew Mahmud I, who was succeeded by his brother Osman III, and Osman[2] by Ahmed's elder son Mustafa III. As a potential heir to the throne, Abdül Hamid was imprisoned in comfort by his cousins and older brother, as was customary. This lasted until 1767. During this period, he received his early education from his mother Rabia Şermi, who taught him history and calligraphy.[2]

When his brother Mustafa III died, Abdül Hamid succeeded him on 21 January 1774.

Abdül Hamid's long imprisonment had left him indifferent to state affairs and malleable to the designs of his advisors.[citation needed] Yet he was also very religious and a pacifist by nature. At his accession the financial straits of the treasury were such that the usual donative could not be given to the Janissary Corps. The new Sultan told the Janissaries "There are no longer gratuities in our treasury, as all of our soldier sons should learn."

Despite his pacific inclinations, the Ottoman Empire was forced to renew the ongoing war with Russia almost immediately. This led to complete Turkish defeat at Kozludzha and the humiliating Treaty of Küçük Kaynarca, signed on 21 July 1774. The Ottomans ceded territory to Russia, and also the right to intervene on behalf of the Orthodox Christians in the Empire. 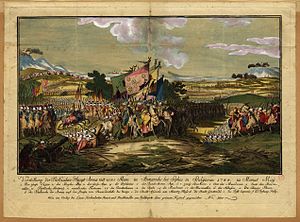 The Ottoman Army advances from Sofia, its largest garrison in Rumelia, in the year 1788.

Abdülhamid now sought to reform the Empire's armed forces. He enumerated the Janissary corps and tried to renovate it, and also the navy. He established a new artillery corps. He was also credited with the creation of the Imperial Naval Engineering School.[1]

Abdülhamid tried to strengthen Ottoman rule over Syria, Egypt, and Iraq.[1] However, slight successes against rebellions in Syria and the Morea could not compensate for the loss of the Crimean Peninsula, which had become nominally independent in 1774, but was in practice now controlled by Russia.

Russia repeatedly exploited its position as protector of Eastern Christians to interfere in the Ottoman Empire, and explicitly. Finally the Ottomans declared war against Russia in 1787. Austria soon joined Russia. Turkey held its own in the conflict, at first, but on 6 December 1788, Ochakov fell to Russia (all of its inhabitants being massacred). It is said that this sad defeat broke Abdül Hamid's spirit, as he died four months later.

In spite of his failures, Abdülhamid was regarded as the most gracious Ottoman Sultan.[citation needed] He personally directed the fire brigade during the Constantinople fire of 1782. He was admired by the people for his religious devotion, and was even called a Veli ("saint"). He also outlined a reform policy, supervised the government closely, and worked with statesmen.

In 1789, Tipu Sultan, ruler of the Sultanate of Mysore sent an embassy to Abdülhamid, urgently requesting assistance against the British East India Company, and proposed an offensive and defensive alliance. Abdul Hamid informed the Mysori ambassadors that the Ottomans were still entangled and exhausted from the ongoing war with Russia and Austria.[citation needed]

Abdülhamid died on 7 April 1789, at the age of sixty-four, in Constantinople. He was buried in Bahcekapi, a tomb he had built for himself.

He bred Arabian horses with great passion. One breed of Küheylan Arabians was named "Küheylan Abdülhamid" after him.

Media related to Abdul Hamid I at Wikimedia Commons