From Infogalactic: the planetary knowledge core
Jump to: navigation, search
Not to be confused with Selim II Giray or Salim bin Thuwaini, Sultan of Muscat and Oman. 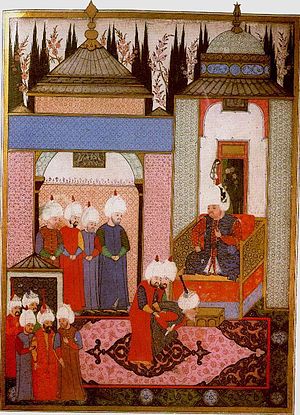 Sultan Selim II receiving the Safavid ambassador in the palace at Edirne in 1567. 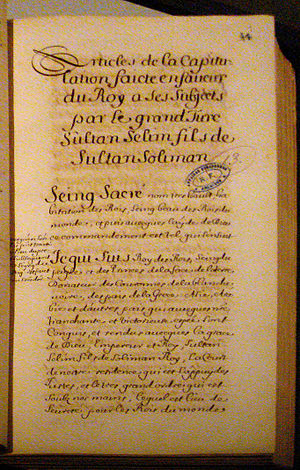 16th century copy of the 1569 Capitulations between Charles IX and Selim II.

Selim II (Ottoman Turkish: سليم ثانى Selīm-i sānī, Turkish:II.Selim; 28 May 1524 – 12 December/15 December 1574), also known as "Selim the Sot" (i.e. "the drunkard", Sarhoş Selim; Mest Selim) and as Sarı Selim ("Selim the Blond"), was the Sultan of the Ottoman Empire from 1566 until his death in 1574. He was a son of Suleiman the Magnificent and Haseki Hürrem Sultan. Selim had been an unlikely candidate for the throne until his brother Mehmed died of smallpox, his half-brother Mustafa was strangled to death by the order of his father, and his brother Bayezid was killed in a coordinated effort between him and his father.

Selim was born in Constantinople (Istanbul), on 28 May 1524, during the reign of his father Suleiman the Magnificent. His mother was Hürrem Sultan, a slave and concubine who was born an Orthodox priest's daughter,[1] and later was freed and became Suleiman's legal wife.[2] Selim had two elder brothers, Mehmed (born 1521) and Abdullah (born 1522), one elder sister Mihrimah (born 21 March 1522), and two younger brothers, Bayezid (born 1525) and Cihangir (born 9 December 1531). He also had half-siblings including Mustafa (son of Mahidevran), and Raziye.

In 1545, at Konya, Selim married Nurbanu Sultan, whose background is disputed. It is said that she was originally named Cecelia Venier Baffo, or Rachel, or Kale Katenou. She was the mother of Murad III, Selim's successor. Hubbi Hatun, a famous poet of the sixteenth century, was a lady-in-waiting to him.

After gaining the throne after palace intrigue and fraternal dispute, he succeeded as sultan on 7 September 1566. According to one source Selim II became the first sultan who took no interest in military matters and was willing to abandon power to his ministers, provided he was left free to pursue his orgies and debauches, earning him the byname of "Drunkard".[3][unreliable source?] Kinross in The Seeds of Decline (1977) suggests a connection between Selim's decadence and his decision to invade Cyprus rather than supporting the Morisco Revolt (1568–1571) in Granada as well as in the manner of his death; Selim died in the Topkapı Palace after a period of fever brought on when he drunkenly slipped over on the wet floor of an unfinished bath-house, getting a head injury.[4][unreliable source?]

Selim's Grand Vizier, Mehmed Sokollu, a native of what is now Bosnia and Herzegovina, controlled much of state affairs, and two years after Selim's accession succeeded in concluding at Constantinople an honourable treaty (17 February 1568) with the Habsburg Holy Roman Emperor, Maximilian II, whereby the Emperor agreed to pay an annual "present" of 30,000 ducats and essentially granted the Ottomans authority in Moldavia and Walachia.

Against Russia, Selim was less fortunate: the first encounter between the Ottoman Empire and her future northern rival gave presage of disaster to come. A plan had been prepared in Istanbul for uniting the Volga and Don by a canal, and in the summer of 1569 a large force of Janissaries and cavalry were sent to lay siege to Astrakhan and begin the canal works, while an Ottoman fleet besieged Azov. However, a sortie of the garrison of Astrakhan drove back the besiegers; a Russian relief army of 15,000 attacked and scattered the workmen and the Tatar force sent for their protection; and finally, the Ottoman fleet was destroyed by a storm. Early in 1570 the ambassadors of Ivan IV of Russia concluded at Constantinople a treaty which restored friendly relations between the Sultan and the Tsar.

Expeditions in the Hejaz and Yemen were more successful, but the conquest of Cyprus in 1571, which provided Selim with his favourite vintage, led to the naval defeat against Spain and Italian states in the Battle of Lepanto in the same year.

The Empire's shattered fleets were soon restored (in just six months; it consisted of about 150 galleys and 8 galleasses) and the Ottomans maintained control of the Mediterranean (1573). In August 1574, months before Selim's death, the Ottomans regained control of Tunis from Spain, which had captured it in 1572.

During his reign, his elder sister Mihrimah Sultan acted as his Valide Sultan, because his mother Hürrem Sultan died before his reign began.

However, Sultan Selim was loved by the people because of his soft character and his sensitive attitude and for his generosity. He is known for giving back to Mahidevran Gülbahar her status and her wealth, contrasting with his father Suleiman's decision. He also built the tomb of his eldest brother, Şehzade Mustafa, who was executed in 1553.

Selim's first and only wife, Nurbanu Sultan, was a Venetian who was the mother of his successor Murad III and three of his daughters. As a Haseki Sultan she received 1,000 aspers a day, while lower-ranking concubines who were the mothers of princes received 40 aspers a day. Selim bestowed upon Nurbanu 110,000 ducats as a dowry, surpassing the 100,000 ducats that his father bestowed upon Hürrem Sultan. According to Leslie Peirce, Selim had four other concubines, each one the mother of a single prince.

Selim had at least four daughters:[6]

An excerpt of an imperial order from the Sultan says:

..because the accursed Portuguese are everywhere owing to their hostilities against India, and the routes by which Muslims come to the Holy Places are obstructed and moreover, it is not considered lawful for the people of Islam to live under the power of miserable infidels … you are to gather together all the expert architects and engineers of that place and investigate the land between the Mediterranean and the Red Seas and report where it is possible to make a canal in that desert place and how long it would be and how many boats could pass side by side.[7]

In 1568 a strong expedition was sent to pacify the province under the command of Sultan Selim’s former tutor and confidant Lala Mustafa Pasha, a choice which showed that Selim was not entirely the pawn of his grand vezir, for Sokullu Mehmed resented Lala Mustafa’s place in the Sultan’s affections. To put down the uprising in Yemen Lala Mustafa needed men and supplies from Egypt but the provincial governor, another rival Koca Sinan Pasha, refused his requests and made it impossible for him to pursue the campaign. In a spate of petitions to the Sultan the two defended their respective positions. Koca Sinan proved the stronger and Lala Mustafa was dismissed from command of the Yemen campaign. To mark his continuing favour, however, Selim created for him the position of sixth vezir of the governing council of the empire. -Osman’s Dream by Caroline Finkel.[8]