Advent is a season observed in many Western Christian churches as a time of expectant waiting and preparation for the celebration of the Nativity of Jesus at Christmas. The term is a version of the Latin word meaning "coming".

Advent is the beginning of the Western liturgical year and commences on the fourth Sunday before Christmas, the Sunday nearest to St. Andrew's Day (30 November), in the Roman Rite of the Catholic Church, and in the Anglican, Lutheran, Moravian, Presbyterian and Methodist calendars.[1] In the Ambrosian Rite and the Mozarabic Rite of the Catholic Church, Advent begins on the sixth Sunday before Christmas, the Sunday after St. Martin's Day (11 November).[2]

Practices associated with Advent include keeping an Advent calendar, lighting an Advent wreath, praying an Advent daily devotional,[3] as well as other ways of preparing for Christmas, such as setting up Christmas decorations,[4][5][6] a custom that is sometimes done liturgically, through a hanging of the greens ceremony.[3][7]

The equivalent of Advent in Eastern Christianity is called the Nativity Fast, but it differs in length and observances, and does not begin the liturgical church year as it does in the West. The Eastern Nativity Fast does not use the equivalent parousia in its preparatory services.[8]

It is unknown when the period of preparation for Christmas that is now called Advent first began – it was certainly in existence from about 480 – and the novelty introduced by the Council of Tours of 567 was to order monks to fast every day in the month of December until Christmas;[9] Some have even said it goes back to the time of the Twelve Apostles or that it was founded by Saint Peter himself.[10] This has led to the conclusion that it is "impossible to claim with confidence a credible explanation of the origin of Advent".[11]

Associated with Advent was a period of fasting, known also as the Nativity Fast or the Fast of December.[12]

The theme of readings and teachings during Advent is often the preparation for the Second Coming, while also commemorating the First Coming of Christ at Christmas. The first clear references in the Western Church to Advent occur in the Gelasian Sacramentary, which provides Advent Collects, Epistles, and Gospels for the five Sundays preceding Christmas and for the corresponding Wednesdays and Fridays.[13] While the Sunday readings relate to the first coming of Jesus Christ as savior as well as to his second coming as judge, traditions vary in the relative importance of penitence and expectation during the weeks in Advent. 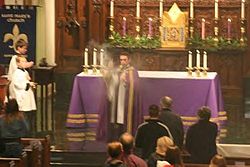 The usual liturgical color in Western Christianity for Advent is either violet (or purple) or blue.[14] The violet or purple color is often used for hangings around the church, the vestments of the clergy, and often also the tabernacle. In some Christian denominations, blue, a color representing hope, is an alternative liturgical color for Advent, a custom traced to the usage of the Church of Sweden (Lutheran) and the medieval Sarum Rite in England. In addition, the color blue is also used in the Mozarabic Rite (Catholic and Anglican), which dates from the 8th century. This color is often referred to as "Sarum blue".

The Lutheran Book of Worship lists blue as the preferred color for Advent while the Methodist Book of Worship and the Presbyterian Book of Common Worship identify purple or blue as appropriate for Advent. There has been an increasing trend in Protestant churches to supplant purple with blue during Advent as it is a hopeful season of preparation that anticipates both Bethlehem and the consummation of history in the second coming of Jesus Christ.[15]

Proponents of this new liturgical trend argue that purple is traditionally associated with solemnity and somberness, which is fitting to the repentant character of Lent. The Roman Catholic Church retains the traditional violet.[16] Blue is not generally used in Latin Catholicism,[17] and where it does regionally, it has nothing to do with Advent specifically, but with veneration of the Blessed Virgin.[citation needed] However, on some occasions that are heavily associated with Advent, such as the Rorate Mass (but not on Sundays), white is used.[citation needed]

On the 3rd Sunday of Advent, Gaudete Sunday, rose may be used instead, referencing the rose used on Laetare Sunday, the 4th Sunday of Lent.[18]

During the Nativity Fast, red is used by Eastern Christianity, although gold is an alternative color.[19]

Many churches also hold special musical events, such as Nine Lessons and Carols and singing of Handel's Messiah oratorio. Also, the Advent Prose, an antiphonal plainsong, may be sung. The "Late Advent Weekdays", 17–24 December, mark the singing of the Great Advent 'O antiphons'.[20] These are the antiphons for the Magnificat at Vespers, or Evening Prayer (in the Roman Catholic and Lutheran churches) and Evensong in Anglican churches each day and mark the forthcoming birth of the Messiah. They form the basis for each verse of the popular Advent hymn, "O come, O come, Emmanuel". German songs for Advent include "Es kommt ein Schiff, geladen" from the 15th century. Johann Sebastian Bach composed four cantatas for Advent in Weimar, beginning with Nun komm, der Heiden Heiland, BWV 61, but only a few more in Leipzig because was a silent time which allowed a cantata only on the first Sunday in Advent.

During Advent, the Gloria of the Mass is omitted, so that the return of the angels' song at Christmas has an effect of novelty.[21] Since mass compositions written especially for Lent, such as Michael Haydn's Missa Tempore Quadragesimae, without Gloria, in D minor, and for modest forces, only choir and organ, may for that reason be chosen for use in Advent.

Bishop Perpetuus of Tours, who died in 490, ordered fasting three days a week from the day after Saint Martin's Day (11 November) In the 6th century, local councils enjoined fasting on all days except Saturdays and Sundays from Saint Martin's Day to Epiphany (the feast of baptism), a period of 56 days, but of 40 days fasting, like the fast of Lent. It was therefore called Quadragesima Sancti Martini (Saint Martin's Lent).[2] This period of fasting was later shortened and called "Advent" by the Church.[22]

In the Anglican and Lutheran churches this fasting rule was later relaxed. The Roman Catholic Church later abolished the precept of fasting (at an unknown date at the latest in 1917), later, but kept Advent as a season of penitence. In addition to fasting, dancing and similar festivities were forbidden in these traditions. On Rose Sunday, relaxation of the fast was permitted. Eastern Orthodox and Oriental Orthodox churches still hold the tradition of fasting for 40 days before Christmas. 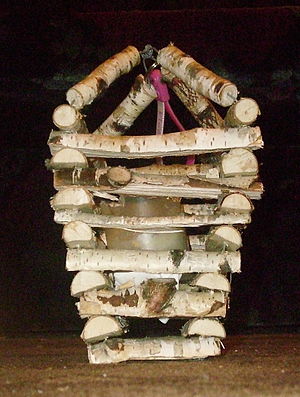 In England, especially in the northern counties, there was a custom (now extinct) for poor women to carry around the "Advent images", two dolls dressed to represent Jesus and the Blessed Virgin Mary. A halfpenny coin was expected from every one to whom these were exhibited and bad luck was thought to menace the household not visited by the doll-bearers before Christmas Eve at the latest.[23]

In Normandy, farmers employed children under twelve to run through the fields and orchards armed with torches, setting fire to bundles of straw, and thus it was believed driving out such vermin as were likely to damage the crops.[24]

In Italy, among other Advent celebrations is the entry into Rome in the last days of Advent of the Calabrian pifferari, or bagpipe players, who play before the shrines of Mary, the mother of Jesus: in Italian tradition, the shepherds played these pipes when they came to the manger at Bethlehem to pay homage to the infant Jesus.[25]

In recent times the most common observance of Advent outside church circles has been the keeping of an advent calendar or advent candle, with one door being opened in the calendar, or one section of the candle being burned, on each day in December leading up to Christmas Eve. In many countries, the first day of Advent often heralds the start of the Christmas season, with many people opting to erect their Christmas trees and Christmas decorations on or immediately before Advent Sunday.[6] 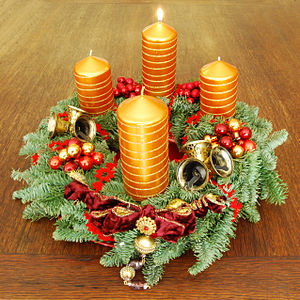 Advent wreaths are used to mark the passage of the season.

The keeping of an advent wreath is also a common practice in homes or churches. The readings for the first Sunday in Advent relate to the old testament patriarchs who were Christ's ancestors, so some call the first advent candle that of hope. The readings for the second Sunday concern Christ's birth in a manger and other prophecies, so the candle may be called of Bethlehem, the way or of the prophets. The third Sunday, Gaudete Sunday after the first word of the introit (Philippians 4:4), is celebrated with rose-colored vestments similar to Laetare Sunday at the middle point of Lent. The readings relate to St. John the Baptist, and the rose candle may be called of joy or of the shepherds. In the Episcopal Church USA, the collect stir up may be read during this week, although before the 1979 revision of the Book of Common Prayer it was sometimes read in the first Sunday of Advent. Even earlier, 'Stir-up Sunday' was once jocularly associated with the stirring of the Christmas mincement, begun before Advent. The phrase 'Stir up' occurs at the start of the collect for the last Sunday before Advent in the 1662 Book of Common Prayer.[26]

The readings for the fourth Sunday relate to the annunciation of Christ's birth, so the candle may be known as the Angel's candle. The Magnificat or Song of Mary may be featured. Where an advent wreath includes a fifth candle, it is known as the Christ candle and lit during the Christmas Eve service.[27][28]