From Infogalactic: the planetary knowledge core
Jump to: navigation, search
For other uses, see Amol (disambiguation).

pronunciation (help·info); also Romanized as Āmol and Amul)[3] is a city in and the administrative center of Amol County, Mazandaran Province, Iran. At the 2006 census, the population of the city was 197,470, in 55,183 families.[4]

Amol is located on the Haraz river bank. It is less than 20 kilometres (12 mi) south of the Caspian sea and less than 10 kilometres (6.2 mi) north of the Alborz mountains. It is 180 kilometres (110 mi) from Tehran, and 60 kilometres (37 mi) west of the provincial capital, Sari.[3] Amol is a historic city, with its foundation dating back to the Amard.

Some historians in the past have associated this ancient city with the periods of the first Persian mythological dynasties of Aryan people, the Pishdadians and the Kianians. Amol is an old city, with a history dating back to the Amards. Amards were the people inhabiting the area before the arrival of Aryans, who had migrated to and settled on the Iranian Plateau from the late 2nd millennium BCE to early 1st millennium BCE. Many scholars believe that the city's name is rooted in the word Amard (Amui in Pahlavi). According to historical literature, Amol was the capital of Mazandaran, at least in the period starting from Sassanid Empire to the Ilkhanate dynasty of Mongol Empire. Though they are a Median tribe, Herodotus names a tribe called Mardians as one of the ten to fifteen Persian tribes in Persis. It is now known that the only distinction between the Median Amardians and the Persian Mardians is the "A" in the beginning of Amardians, which would mean they are two different tribes.

During the age of the Parthian Empire, Amol was one of the centers of Iran.

According to historical literature, Amol was the capital of Mazandaran during the period starting from the 3rd century CE under Sassanian Empire to the 13/14th century CE under the Ilkhanate dynasty of Mongol Empire.

Amol, in the era of Alid dynasties of northern Iran and Marashis dynasty was the capital of Mazandaran. The inhabitants of Amol embraced Islam during the reign of Mahdi (775–785 CE), the Abbasid Caliph, after which Islamic structures came into focus. After the Mongol invasion, the region was subject to devastation and it was during this time that Sari was declared as capital. In the beginning of the 7th century AH (14th century CE), Hessam-edin Ardeshir changed the capital from Sari to Amol, and constructed his palace there. But in 795 AH (1392/1393 AD), the cities of Amol and Sary were plundered by Amir Teimoor Gurkani, and thereafter Amol suffered a setback. Today, Amol is a thriving modern metropolis.

In time of the Safavid rulers of Mazandaran, Amol experienced a period of growth. Amol was the favorite dwelling of Abbas II of Persia, who often frequented it. At the time Amol was considered "the capital of the inhabited world" and acclaimed for its grandeur. Several bridges were built in the area, across the Haraz river, at this time.

The "Jungle Uprising" In 1982 of the Union of Iranian Communists (Sarbedaran) mobilized its forces to jungles around Amol and started some wars against the Iranian government in those jungles. It finally organized a famous uprising on 25 January 1982. This uprising was a failure and most of the UIC leaders were hanged but the uprising itself became very famous and is well respected between some Iranian Leftist organizations.

Some of the most recent projects have been the complete restoration of the Bazaar and of the Imam Reza street, as well as a comprehensive plan for the preservation of the old city quarters. A lot of different construction projects are currently underway, which intend to modernize the city's infrastructure. In the last few years, many towers and boulevards were built in Amol. 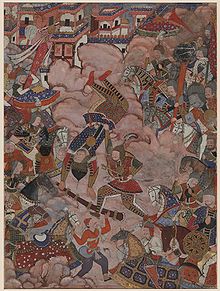 The Battle History Of Mazandaran

The name "Amol" has come up 16 times in Shahnameh. In the Persian epic, Shahnameh, Mazandaran is mentioned in two different sections. The first mention is implicit, when Fereydun sets its capital in a city called Amol:

The statue of "Arash the Archer"

Arash story of the Shahnameh:

Amol is located on the banks of the Haraz River (26 25'N 52 21'E) at an altitude of 76 m above sea. It is about 18 km from the Caspian Sea and about 10 km from the northern Alborz mountains. It is 180 km from the Iranian capital, Tehran, with a picturesque drive through Haraz Road. Sari, the capital of Mazandaran is 70 km east of Amol. Mount Damavand (5610 m), the highest peak in the Middle East, is located south of Amol.

In recent years, on the excavation hill Qaleh Kesh, some ancient jewelry was discovered. Radiocarbon analysis revealed the background of the jewelery and objects to date from the 1st millennium BC, Bronze Age.

The population history of the city proper is as follows. All figures are official census figures from the Iranian Statistics Institute.[5]

Most Amoli people speak the Mazandarani language Tabari as a mother tongue; however, Persian is the most common language spoken in Iran and the lingua franca. At present, the majority of people are followers of Shia Islam. Amol, Mazandaran has its own calendar months in addition to the official Tabari calendar of the moon, used in the era of Yazdgerd.

Amol is the economic center of Mazandaran province, with Agriculture and Tourism being the base of the Amoli economy. Rice, grain, fruits, cotton, tea, sugarcane, and silk are produced in the lowland. Mineral water, meat, dairy, wood and ingots are the main manufacturing industry.

Amol is a center for Iranian culture and has produced a number of famous poets. Wool, felting, felt hat production and mat weaving are part of the Amoli culture. Barf Chal, Lochu Wrestling, Palm and Tiregān (Damavand national day) are local events held each year.

The main body of the old city of Amol is located in the old bazaar Amol. 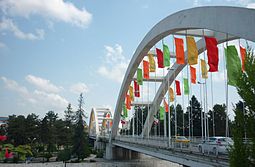 Haraz Road (Road 77) is the most important road from Tehran to northern Iran (province of Mazandaran) besidesKaraj-Chaloos. This road passes from the valley of Haraz river and therefore is also known as Haraz Road between Amol and Rudehen. Haraz road is the nearest road to Mount Damavand, the highest peak in Iran and Middle East. Lar National Park is accessible via this road. The road is the shortest route from Tehran to the north (180 km). In recent years, some parts of the road have been widened and safety has been improved.

In the 11th century AD, Nizam al-Mulk, in his famous book named "Seer-ul-moluok", recommended creation of modern institutions by the name of "nezamiyehs" with academic status in the large cities of the Islamic world, such as Balkh, Baghdad, Damascus, Neishabour, and Bukhara; the name of Amol was also included among them.

As the administrative center of Amol county

Amol is the administrative center of Amol county.