Kilims (Persian: گلیم‎‎ gelīm, Azerbaijani: Kilim, Turkish: Kilim) are flat tapestry-woven carpets or rugs produced from the Balkans to Pakistan. Kilims can be purely decorative or can function as prayer rugs. Modern kilims are popular floor-coverings in Western households.

The term 'kilim' originates from the Persian gelīm (گلیم) where it means 'to spread roughly',[1] perhaps of Mongolian origin.[2] The Turkish name is kilim; Kurdish has its own name: berr.

File:Kilimsc.jpg
A Shahsavan kilim (in Ardabil) with typical geometric symbols, some of them of mythological inspiration, such as the crab or scarab beetle.

Like pile carpets, kilim have been produced since ancient times. The explorer Mark Aurel Stein found kilims dating to at least the fourth or fifth century CE in Hotan, China:

"As kilims are much less durable than rugs that have a pile to protect the warp and weft, it is not surprising that few of great age remain.... The weave is almost identical with that of modern kilims, and has about fourteen threads of warp and sixteen threads of weft to the inch. The pattern consists of narrow stripes of blue, green, brownish yellow, and red, containing very small geometric designs. With this one exception, so peculiarly preserved, there are probably very few over a century old."[3]

Kilims are produced by tightly interweaving the warp and weft strands of the weave to produce a flat surface with no pile. Kilim weaves are tapestry weaves, technically weft-faced plain weaves, that is, the horizontal weft strands are pulled tightly downward so that they hide the vertical warp strands.[4]

When the end of a color boundary is reached, the weft yarn is wound back from the boundary point. Thus, if the boundary of a field is a straight vertical line, a vertical slit forms between the two different color areas where they meet. For this reason, most kilims can be classed as "slit woven" textiles. The slits are beloved by collectors, as they produce very sharp-etched designs, emphasizing the geometry of the weave. Weaving strategies for avoiding slit formation, such as interlocking, produce a more blurred design image.[5]

The weft strands, which carry the visible design and color, are almost always wool, whereas the hidden warp strands can be either wool or cotton. The warp strands are only visible at the ends, where they emerge as the fringe. This fringe is usually tied in bunches, to ensure against loosening or unraveling of the weave.[5] 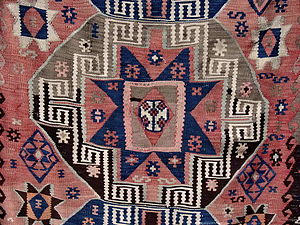 Detail of a Turkish kilim

Ardabil rugs feature motifs that are very similar to Caucasian rugs, but with more motifs and objects woven into the borders. The colors are also lighter. The patterns are predominantly geometric and the most common layouts on Ardabil rugs are medallions, multiple connected diamond-shaped medallions, and all-over octagonal shapes. The most recognized design found on Ardabil rugs is the famous Mahi (Herati) design - a diamond medallion and small fish throughout. Another widely used motif is the elibelinde, a stylized female figure.[6] Some modern weavers have begun to favor bold geometric patterns over the traditional Mahi (Herati) design and have added colors such as turquoise and purple to the more traditional red, pink, ivory, green, and blue.

Because kilims are often cheaper than pile rugs, beginning carpet collectors often start with them. Despite what many perceive as their secondary (or inferior) status to pile carpets, kilims have become increasingly collectible in themselves in recent years, with quality pieces now commanding high prices.

What some sensed as inferiority was actually a different nature of rugs woven for indigenous use as opposed to rugs woven on a strictly commercial basis. Because kilims were not a major export commodity, there were no foreign market pressures changing the designs, as happened with pile carpets. Once collectors began to value authentic village weaving, kilims became popular. Now, many kilims are woven for export.

Perhaps the best known and most highly regarded, these kilims (or kelims) are traditionally distinguished by the areas, villages or cities in which they are produced, such as Konya, Malatya, Karapinar and Hotamis. Most Anatolian kilims are slit woven. Larger antique kilims were woven in two to three separate sections on small nomadic horizontal floor looms in three feet wide long strips, then carefully sewn together matching the patterns edges to create an ultimately wider rug. These pieces are still being produced in very limited quantities by nomadic tribes for their personal use and are commonly known as cicims.