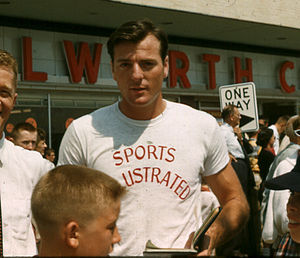 Mathias in Fresno, California in 1953.

Mathias was born in Tulare, California. He attended Tulare Union High School, where he was classmates and long time friends with Sim Iness, 1952 Olympic discus gold medalist. While at Tulare Union, Mathias took up the decathlon in early 1948, at the suggestion of his track coach, Virgil Jackson. During the summer after his high school graduation, he qualified for the United States Olympic team for the 1948 Summer Olympics held in London.

In the Olympics, Mathias's naïveté about the decathlon was exposed.[1] He was unaware of the rules in the shot put and nearly fouled out of the event. He almost failed in the high jump but was able to recover. Mathias overcame his difficulties and won the Olympic gold medal easily. At 17, he was the youngest gold medalist to win a track and field event.

Mathias continued to fare well in decathlons in the four years between the London games and the 1952 Summer Olympics in Helsinki. In 1948, Mathias won the James E. Sullivan Award as the nation's top amateur athlete, but because his scholastic record in high school did not match his athletic achievement, he spent a year at The Kiski School, a well-respected all-boys boarding school in Saltsburg, Pennsylvania. He then entered Stanford University in 1949, played college football for two years and was a member of Phi Gamma Delta fraternity. Mathias set his first decathlon world record in 1950 and led Stanford to a Rose Bowl appearance in 1952. After graduating from Stanford in 1953 with a BA in Education, Mathias spent two and a half years in the U.S. Marine Corps. He was promoted to the rank of captain and was honorably discharged.

At Helsinki, Mathias asserted himself as one of the world's best athletes. He won the decathlon by 912 points, an astounding margin, becoming the first to successfully defend an Olympic decathlon title. He returned to the United States as a national hero. In 1952, he was, therefore, the first person to ever compete in an Olympics and a Rose Bowl the same year. After the 1952 Olympics, Mathias retired from athletic competition. He later became the first director of the United States Olympic Training Center, a post he held from 1977 to 1983.

He and his wife Melba can be seen on the 29th April 1954 edition of You Bet Your Life. During the discussion he mentions a forthcoming film in which the couple played themselves, called The Bob Mathias Story. He also starred in a number of mostly cameo-type roles in a variety of movies and TV shows throughout the 1950s. In the 1959-1960 television season, Mathias played Frank Dugan, with costars Keenan Wynn as Kodiak and Chet Allen as Slats, in the NBC adventure series The Troubleshooters, which focused twenty-six episodes on events at construction sites.[2] In 1960, he also appeared playing an athletic Theseus in an Italian "peplum," or sword-and-sandal, film: Minotaur, the Wild Beast of Crete.

Between 1967 and 1975, Mathias served four terms in the United States House of Representatives as a Republican, representing the northern San Joaquin Valley of California. He defeated Harlan Hagen, the 14-year Democratic Party incumbent, by about 11 percent in the 1966 election. This was not too surprising, since this area had started to pull away from its New Deal Democratic roots.

Mathias was re-elected three times without serious difficulty, but in 1974, his district's boundaries were radically altered in a mid-decade redistricting. His district was renumbered as the 17th District, and picked up a large chunk of Fresno while losing several rural areas. Mathias was then narrowly defeated for re-election by John Hans Krebs, a member of the Fresno County Board of Supervisors. Mathias was one of several Republicans swept out in the wake of the Watergate scandal.

From June to August 1975, Mathias served as the Deputy Director of the Selective Service. Mathias was also involved in the unsuccessful 1976 Presidential re-election campaign of President Gerald Ford.

Bob Mathias was diagnosed with cancer in 1996, and died as a result in Fresno, California on September 2, 2006 at age 75. He is interred at Tulare Cemetery in Tulare, California. He was survived by four daughters, Romel, Megan, Marissa, and Alyse Alexander. Mathias was also survived by a son Reiner and 10 grandchildren.