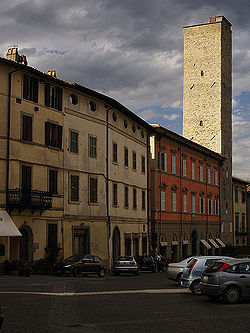 Civic tower of the Cathedral Square

Città di Castello (Italian pronunciation: [tʃitˈta ddi kaˈstɛllo]) is a city and comune in the province of Perugia, in the northern part of the Umbria region of Italy. It is situated on a slope of the Apennines, on the flood plain of the river Tiber. The city is 56 km (35 mi) north of Perugia and 104 km (65 mi) south of Cesena on the S3bis. It is connected to the A1 highway by the SS 73 from Arezzo (17 mi). Città di Castello has an exclave named Monte Ruperto within Marche.

The town was founded by the Umbri tribes. The Romans knew it as Tifernum Tiberinum ("Tifernum on the Tiber")[1] or Civitas Tiberina. Just nearby, Pliny the Younger built his villa in Tuscis, which is identified with walls, mosaic floors and marble fragments surviving at a place now called Colle Plinio, the "Hill of Pliny". The town may have come into conflict with the Etruscans.[2]

In 550 AD, Tifernum was largely destroyed during the Ostrogothic campaign by Fantalogus, at the orders of Totila. The town was subsequently rebuilt by its bishop, Floridus, around a castle, and renamed first Castrum Felicitatis and later Civitas Castelli. By the Donation of Pepin of the Frankish king Pepin the Short in 752, it went to the Holy See. After it became free common. It was ruled by the Vitelli family, even after Cesare Borgia attached the city more directly to the Holy See.

In subsequent centuries, it had various rulers, among them Pier Saccone Tarlati di Pietramala, brother of Guido, Bishop of Arezzo. Pier Saccone sold it in 1322 to Guido Alberto de' Guidi di Modigliana.In Middle Ages the Diocese of Citta' di Castello included also many territories that are today in the provinces of Arezzo, Pesaro and Rimini. In the later Middle Ages it was governed successively by the Guelphs and Ghibellines. In 1375, Città di Castello joined the insurrection of other cities of the States of the Church. Cardinal Robert of Geneva (later antipope as Clement VII), tried to capture it using Breton mercenaries, but was repulsed. Under Pope Martin V in 1420, it was taken by the condottiero Braccio da Montone. Later Niccolò Vitelli, aided by Florence and Milan, became absolute ruler or tiranno. Antonio da Sangallo the Younger built an extensive palace for the Vitelli family.

In 1474, Sixtus IV sent his nephew, Cardinal Giuliano della Rovere (later Julius II); after fruitless negotiations he laid siege to the city, but Vitelli did not surrender until he learned that the command of the army had been given to Duke Federico III da Montefeltro. The following year Vitelli tried unsuccessfully to recapture the city; fear of Cesare Borgia induced him to desist, since Cesare Borgia had his father strangled and Città di Castello added to the papal possessions.

Towards the end of the twentieth century, the city has seen a considerable expansion northwards toward San Giustino, with industrial parks tracking the river, railroad and main highway: the area produces farm machinery, textiles, ceramics and furnishings.

The city is mostly built of brick, since the local sandstone erodes very rapidly. Its principal monuments include the medieval Palazzo Comunale and a tall thin tower, the Torre Comunale; and the Pinacoteca Comunale, an art museum with mostly Renaissance works, notable for its external decoration by Giorgio Vasari.

The much reworked cathedral, now mostly from the 18th century with an unfinished 17th century façade, has an altar-front (paliotto) of chased silver dating to the 12th century, and a crosier from the 15th. It also houses works by Niccolò Circignani, Rosso Fiorentino and Raffaellino del Colle. The bell tower is in Romanesque style (13th century). The Cathedral's museum is home to the Canoscio hoard, a set of Late Antique silver spoons and plates with Christian motifs, as well as a silvered altarpiece donated by Pope Celestine V in the 12th century, a Madonna by Pinturicchio (1486) and Angels by Giulio Romano.

The city has memorialized the abstract painter and sculptor Alberto Burri, who was born in Città di Castello, with the "Fondazione Palazzo Albizzini Collezione Burri" housing a large permanent museum of his works in the former Palazzo Albizzini.

For persons from the city, see People from Città di Castello. In addition, the following are believed to have had a local connection, usually through long residence there: