From Infogalactic: the planetary knowledge core
Jump to: navigation, search
This article is about the county. For its ruling family, see House of Regenstein. For the castle, see Regenstein Castle.

The County of Regenstein was a mediaeval statelet of the Holy Roman Empire. 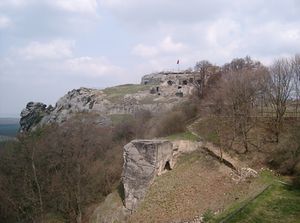 The counts of Regenstein Castle near Heimburg were first mentioned in an 1169 deed, with Count Conrad of Regenstein, son of Poppo I, Count of Blankenburg (1095–1164), himself a nephew of Count Reinhard, Bishop of Halberstadt from the Ripuarian House of Reginbodo.[1]

The most renowned Count of Regenstein was Albert II (1310–49),[2] who in the 1330s was frequently in dispute with the leaders of the surrounding estates like the Halberstadt bishops and the abbess of Quedlinburg. These tales were romanticised in the ballad The Robber Count (German: Der Raubgraf) by Gottfried August Bürger, melodized by Johann Philipp Kirnberger and the novel of the same name by Julius Wolff.[3]