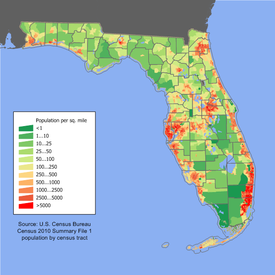 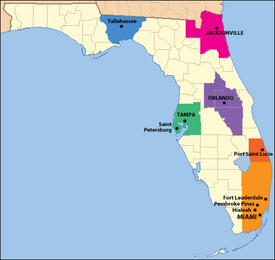 There are people from a variety of ethnic, racial, national and religious backgrounds. The state has attracted a number of immigrants.[2]

Florida has a majority ethnic group, with approximately 65% considered White. There are a number of national communities in the state, particularly Cubans who migrated there during the past century to the southern end. Spanish is the state's second-most spoken language, especially in Miami-Dade County area.

According to the 2005 census, the racial distributions are as follows; 60.1% White, 17% African-American, 2.1% Asian American, 1.4% others (American Indians), and the remaining 20% are Hispanics or Latino (of any ethnicity or national origin). Florida has one of the largest African-American populations in the country, but ranks the second highest Latino population in the East coast outside of New York state and Florida's Asian-American population has grown in high rates since the late 1990s, the majority being ethnic Chinese, Filipinos and Vietnamese settled in the Gulf Coast. The state has a some federally recognized American Indian tribes, like the Seminoles in the southeastern part of the state.[citation needed]

Florida's Hispanic population includes large communities of Cuban Americans in Miami (mainly from refugees fleeing the Castro regime) and Tampa, Puerto Ricans in Tampa and Orlando, and Central American and Mexican in inland West-Central and South Florida, like the Lake Okeechobee area. The Hispanic community continues to grow more affluent and mobile: between the years of 2000 and 2004, Lee County in Southwest Florida, which is largely suburban in character, had the fastest Hispanic population growth rate of any county in the United States. Florida has a large and diverse Hispanic population, aside from the dominant Cuban, Puerto Rican, and Mexican populations, there are also significant populations of Colombians, Dominicans, and Nicaraguans, among others.[citation needed]

Non-Hispanic White Floridians of longer-present generations are in the culturally southern areas. Some native white Floridians, especially those who have descended from long-time Florida families, affectionately refer to themselves as "Florida crackers.," while others see it as a derogatory term akin to "redneck." Like all the other southern states, they descend mainly from Scots-Irish as well as some English or Welsh settlers, and even some evident French and Spanish heritage going back 300 to 400 years.[citation needed]

Non-Hispanic blacks are present throughout the state, having one of the fastest growing black population in the US. Over half of the non-hispanic blacks are of African American descent, the remaining portion is made up of West Indians. African Americans are present in large numbers in the metro areas of Tampa, Orlando, Jacksonville, Tallahassee, and throughout North Florida. There is a large West Indian/Caribbean population in the Miami metropolitan area, to a lesser extant in Orlando and Tampa. Florida has a large West Indian population, having the largest population of Haitians and the second largest population of Jamaicans in the United States.[citation needed]

Florida's public education system identified over 200 first languages other than English spoken in the homes of students.[4] In 1990, the League of United Latin American Citizens (LULAC) won a class action lawsuit against the state Florida Department of Education that required educators to be trained in teaching English for Speakers of Other Languages (ESOL).[5]

Article II, Section 9, of the Florida Constitution provides that "English is the official language of the State of Florida." This provision was adopted in 1988 by a vote following an Initiative Petition.

There are many people in Florida who immigrated from countries in Asia, Latin America, and the Caribbean. There are Asian Latin Americans and Asian-Hispanic Americans, such as Chinese Cubans, Korean Argentinians, and Japanese Brazilians whose first or second language may be Latin American Spanish or Brazilian Portuguese, for example. There are also Asian Caribbean-Americans such as Indo-Caribbean Americans, Chinese Jamaicans, Indo-Surinamese, Indo-Martiniquais, and Indo-Trinidadian and Tobagonians who may speak other languages like Trinidadian English or Caribbean Hindustani or Caribbean and Surinamese Dutch or Caribbean French, and/or French Creole or Dutch Creole.

Native Americans also add to the language diversity by their indigenous languages of the Seminoles and Miccosukees with the Muskogean languages of Muscogee and Mikasuki.

Due to its large number of immigrants and American citizens who move to Florida from all over the US (especially from the Northeast), there are a wide variety of different regional accents of English spoken in Florida. The most common American English accents spoken, besides General American English, can be divided by the east and west coasts of Florida.

The New York City area dialect (including New York Latino English and North New Jersey English) and various types of New England English can mostly be heard in Florida's eastern coastline along the Atlantic Ocean, especially along the Gold Coast and South Florida. The western coastline along the Gulf of Mexico had more of an Inland Northern American English from those who were from originally from the Midwest and Great Lakes regions and moved to Southwest Florida or Tampa Bay. Central Florida tends to be where all of those predominate accents are evenly heard.

The Miami accent tends to be spoken by those who were born and/or raised in and around Miami-Dade County and a few other parts of South Florida,[6] regardless of their racial or ethnic background, although it's more prominent with Hispanics (especially with Cuban Americans and also significantly with other Latino groups throughout all of Latin America.)[7][8] In Central Florida and the Tampa Bay area, New York Latino English might be more prevalent due to generations of Stateside Puerto Ricans (Nuyoricans), Dominican Americans, Colombian Americans, and other Hispanic Americans who continue to move away from the New York metropolitan area in large numbers.

Many West Indian Americans (Afro-Caribbean, Indo-Caribbean, or any other race), tend to speak Caribbean English, especially Bahamian English, Jamaican English, and Trinidadian English. Their accents are found mostly in South Florida and the Florida Keys, but can also be widely heard in Central Florida, and some parts of Southwest Florida and Tampa Bay. Multi-generational Caribbean Americans sometimes speak it with relatives and others who share their ancestry. Some African Americans throughout all regions of Florida speak African American Vernacular English influenced by the South or Northeastern dialects, depending where in the US they or their parents were born. A few African Americans may also have speech patterns influenced by their Black Seminole or Gullah ancestry.

Florida is mostly Protestant, but Roman Catholicism is the single largest denomination in the state. There is also a sizable Jewish community, located mainly in South Florida. Florida's current religious affiliations are shown in the table below:[9]

There were 1.6 million veterans in Florida in 2010, representing 15% of the total population.[10] This is the second highest total in the United States.[11]