During its first century as a city, Chicago grew at a rate that ranked among the fastest growing in the world. Within the span of forty years, the city's population grew from slightly under 30,000 to over 1 million by 1890. By the close of the 19th century, Chicago was the fifth largest city in the world,[1] and the largest of the cities that did not exist at the dawn of the century. Within fifty years of the Great Chicago Fire of 1871, the population had tripled to over 3 million.[2]

Many of Chicago's politicians are descendants of the large ethnic Irish population, whose ancestors arrived especially from the mid-19th century on. Its previous mayor, Richard M. Daley, is ethnic Irish. The Chicago Metropolitan area is becoming a major center for Indian Americans. Chicago has the second largest Bosnian American population in the country, after St. Louis. 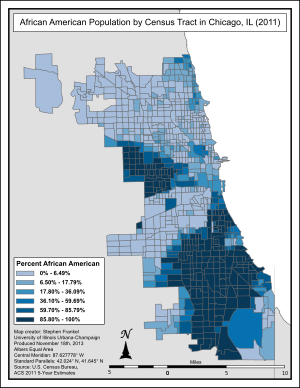 While most of Chicago and its surrounding residential areas are generally regarded as being somewhat racially segregated, the city's unique culture arises from its being a melting pot, with nearly even percentages of European Americans and African Americans as well as sizable populations of Hispanics and Asians. The White, Black and Hispanic communities extend radially outward from the center of the city.

Chicago has a large Irish American population, with many still residing on the South Side. The early years of Chicago coincided with the significant rise in Irish immigration in the 1830s and 1840s. Some Irish already lived in Chicago when it was incorporated as a city in 1837. In the next few years Irish numbers grew rapidly, particularly after the arrival of refugees from the Great Famine. By 1850 Irish immigrants accounted for about one-fifth of the city's population.[13] Many of the city’s politicians are descendants of this group, including previous mayor Richard M. Daley. The Irish gained entry to Chicago's Fire and Police Departments and have kept family traditions of participation in these units. The Irish laid the foundations for many of the city's Roman Catholic churches, schools and hospitals. The Irish are still very active in the city's politics.

Germans have constituted a major portion of ethnic whites in Chicago since the beginning of the city's history. When the Great Plains opened up for settlement in the 1830s and 1840s, many German immigrants stopped in Chicago to earn additional money before moving West to claim a homestead. Those with skills in demand could — and often did — stay. From 1850, when Germans constituted one-sixth of Chicago's population, until the turn of the 20th century, people of German descent constituted the largest ethnic group in the city, followed by Irish, Poles, and Swedes. In 1900, 470,000 Chicagoans—one out of every four residents—had either been born in Germany or had a parent born there. Although their numbers dropped because of reduced emigration from Germany and because World War I had made it unpopular to acknowledge one's German heritage, 22 percent of Chicago's population still did so in 1920.[6] One of the most distinct of these German groups were the Volga Germans, or ethnic Germans having lived along the Volga River in Russia. They largely clustered in Jefferson Park on the city's Northwest Side, coming to the area mostly between the years 1907-1920. By 1930 450 families of Volga German heritage were living in the Jefferson Park area, most of whom originated from Wiesenseite.[7] 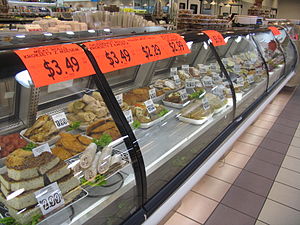 Bobak's Sausage Company, A Polish supermarket on the Southwest Side of Chicago

Poles in Chicago constituted the largest ethnically Polish population outside of Warsaw before 1918 when Poland reemerged as an independent state. The city is one of the most important Polonia centers in the 21st century,[8] and every Labor Day weekend the city celebrates at the Taste of Polonia Festival in Jefferson Park.[9] The Southwest Side is home to the largest concentration of Górals (Carpathian highlanders) outside of Europe; it is the location of the Polish Highlanders Alliance of North America. The city also has a large Assyrian population, numbering as many as 80,000[10] and is the location of the seat of the head of the Assyrian Church of the East, Mar Dinkha IV. Chicago also hosts the headquarters of the largest Lutheran body in the United States, the Evangelical Lutheran Church in America.[11][citation needed] The city is the home to a large Romanian American community with more than 100,000.[12]

The Chicago Metropolitan area is becoming a major center for Indian Americans and South Asian Americans. Chicago has the third largest South Asian American population in the country, after New York City and San Francisco. The Devon Avenue corridor on Chicago's north side is one of the largest South Asian neighborhoods in North America. Around 185,000 Arabs live in Chicago, with the majority located in the suburban parts of Cook County. An estimated 75,000 more Arabs live in the five counties around Cook County including Lake, Kendall, Will, and DuPage.[13]

Polish people have been prevalent from the city's early history, but the largest waves of immigration were in the late 19th and early 20th centuries; they have been influential in the economic and social development of Chicago. Today Poles in Chicago make up the largest ethnic Polish population of any city outside of Poland.[14] This is one of the most important centers of Polonia. The Taste of Polonia Festival in Jefferson Park celebrates Polish culture annually on Labor Day weekend.[9] The Southwest Side is home to the largest concentration of Gorals (Carpathian highlanders) outside of Europe. The southwest side is also the location of the Polish Highlanders Alliance of North America. Many Polish churches are found in Chicago, built in the Polish Cathedral style of architecture. Some can be seen from the Kennedy Expressway, other roadways, and public transportation routes, as well as from the neighborhood streets. 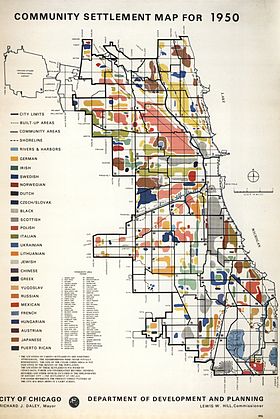 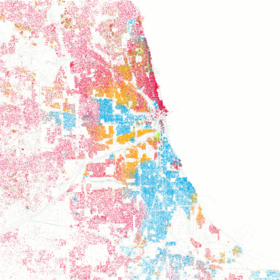 Chicago's racial makeup in 2010. (Each dot represents 25 people - red dots are Whites, blue dots are Blacks, green is Asian, orange is Hispanic, gray is other).

Chicago has one of the largest concentrations of Italian Americans in the US, with more than 500,000 living in the metropolitan area.[15] Chicago has the third largest Italian American population in the United States, behind only New York and Philadelphia. Chicago's Italian community has historically been based along the Taylor Street and Grand Avenue corridors on the West Side of the city. There are also significant Italian populations scattered throughout the city and surrounding suburbs.

The first Bosnians settled in Chicago in the late 19th and early 20th centuries, joining other immigrants seeking better opportunities and better lives. As the former Yugoslavia continued to find its identity as a nation over the last century, the people of Bosnia and Herzegovina sought stability and new beginnings in the city of Chicago many intending to return to their homeland. Bosnian Muslims were early leaders in the establishment of Chicago’s Muslim community. In 1906, they established Dzemijetul Hajrije (The Benevolent Society) of Illinois to preserve the community’s religious and national traditions as well as to provide mutual assistance for funerals and illness. The organization established chapters in Gary, Indiana, in 1913, and Butte, Montana, in 1916, and is the oldest existing Muslim organization in the United States.[16] The Bosnians were the first Muslims in the United States to incorporate an Islamic Association in 1906 in Chicago, Illinois.[17] There are approximately 70,000 Bosnian Americans in Chicago. 40,000 of them came as refugees during the 1990s and early 2000s.[18]

Other prevalent European ethnic groups include the Czechoslovakians, and Ukrainians. At the turn of the 20th century, Chicago was the third-largest Czech city in the world, after Prague and Vienna.[19] There are approximately 14,000 Ukrainians living within the Chicago city limits.[20] There is a large African American population located mostly on Chicago’s South Side and West Side. The Chicago metropolitan area has the third largest African American population, behind only New York City and Atlanta. Chicago has a small community of Swedish Americans. Swedish Americans make up 0.9% of Chicago's population, and they number at 23,990.[21] After the Great Chicago Fire, many Swedish carpenters helped to rebuild the city, which led to the saying "the Swedes built Chicago."[22] Swedish influence is evident in Andersonville on the far north side.

The city has a large population of Bulgarians, Lithuanians,[23] Croats, Greeks and Serbians.[24] Chicago has a sizeable Romanian American community,[25] as well as a large Assyrian population. The city is the seat of the head of the Assyrian Church of the East, Mar Dinkha IV, the Evangelical Covenant Church,[26] and the Evangelical Lutheran Church in America headquarters.[11]

The city saw an increase of 20,606 people from July 1, 2007 to July 1, 2008, according to census data. This marked the second consecutive year of population increase, while still not yet returning to the official Census 2000 population level. As of the 2007 US Census American Community Survey the largest European ancestries were:[31]

Population estimates in 2008 put the number of people in the city proper at 2,853,114, while suburban populations continue to grow, with estimates at 9,785,747 for the combined city and suburbs.

Christianity is predominant among the city's population who worship (71%).[32][33] The Chicago metropolitan area also includes adherents of Judaism, Islam, Buddhism, Hinduism, Jainism, Sikhism, and the Bahá'í, among others.