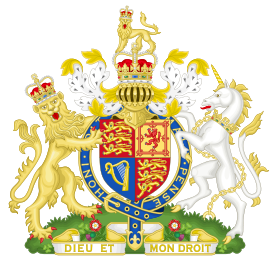 The motto appears on a scroll beneath the shield of the "English" (non-Scottish) version of the Royal coat of arms of the United Kingdom.

Dieu et mon droit (French pronunciation: ​[djø e mɔ̃ dʁwa]), meaning God and my right[1][2] or literally fr:Dieu et mon droit (My divine right) is the motto of the Monarch of the United Kingdom[2] outside Scotland. It appears on a scroll beneath the shield of the version of the coat of arms of the United Kingdom used outside Scotland.[1] The motto is said to have first been used by Richard I (1157–1199) as a battle cry and presumed to be a reference to the divine right of the Monarch to govern.[3] It was adopted as the royal motto of England by King Henry V (1386–1422)[2][3][4] with the phrase "and my right" referring to his claim to the French crown.[4]

For the Royal coat of arms of the Kingdom of England to have a French rather than English motto was not unusual, given that Norman French was the primary language of the English Royal Court and ruling class following the rule of William the Conqueror of Normandy and later the Plantagenets. Another Old French phrase also appears in the full achievement of the Royal Arms. The motto of the Order of the Garter, Honi soit qui mal y pense ("Spurned be the one who evil thinks"), appears on a representation of a garter behind the shield. Modern French spelling has changed honi to honni, but the motto has not been updated.

The literal translation of Dieu et mon droit is "God and my right".[2] However, Kearsley's Complete Peerage, published in 1799, translates it to mean "God and my right hand". (In standard French that would be Dieu et la [main] droite, not mon droit.) The Kearsley volume appeared during publication of the 1st edition (1796–1808) of the German Brockhaus Encyclopedia, which emphasised the raising of the "right hand" during installations and coronations of German Kings.

Diderot's Encyclopédie lists the motto as Dieu est mon droit, translated as "God is my right".[14]

Use as royal motto 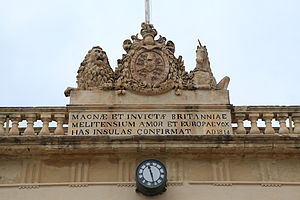 The British coat of arms with the motto on the Main Guard in Valletta, Malta[2]

Dieu et mon droit has generally been used as the motto of English—and later British (outside Scotland)—monarchs since being adopted by Henry V.[2][4][15] It was first used as a battle cry by King Richard I in 1198 at the Battle of Gisors, when he defeated the forces of Philip II of France and after he made it his motto.[15][16] The belief in medieval Europe was not that victory automatically went to the side with the better army but that, as with personal trial by combat, to the side that God viewed with favour.[17] Hence Richard wrote after his victory "It is not us who have done it but God and our right through us".[15] So after his victories on the crusades "Richard was speaking what he believed to be the truth when he told the Holy Roman Emperor: 'I am born of a rank which recognises no superior but God'."[18]

Alternatively, the Royal Arms may depict a monarch's personal motto. For example, Elizabeth I and Queen Anne's often displayed Semper Eadem; Latin for "Always the same",[19] and James I's depicted Beati Pacifici, Latin for "Blessed are the peacemakers".[20] 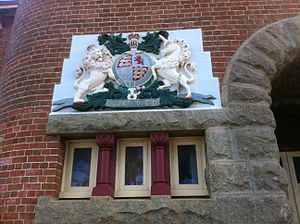 Versions of the coat of arms, with the motto, are also used by other newspapers, including Melbourne's The Age in Australia, Christchurch's The Press in New Zealand, the UK's Daily Mail and Canada's Toronto Standard.

It is also found on the official belt buckle of the Jamaica Constabulary Force,[citation needed] the front page of a British passport, the arms of the Supreme Court of Victoria, and the crests of Hawthorn Rowing Club in Melbourne, Australia, Nottingham Law School and Sherborne School.[22]

The coined phrase was as well used by Michael Jackson at his Neverland Ranch's front gates. The crest on the main gates carried the Royal coat of arms of the United Kingdom, along with the phrase at the bottom.[23]

The Hearts of Oak, a revolutionary New York militia commanded by Alexander Hamilton, wore badges of red tin hearts on their jackets with the words "God and Our Right".[24]

The phrase was the inspiration for a joke motto by The Beatles, Duit on Mon Dei ("Do it on Monday")[citation needed] and Harry Nilsson's 1975 album Duit on Mon Dei.