He was the third son of the George Venables-Vernon, 1st Baron Vernon (1710–1780), and took the additional name of Harcourt on succeeding to the property of his cousin, the last Earl Harcourt, in 1831.[2]

Edward Venables-Vernon was born at Sudbury Hall, Derbyshire on 10 October 1757. He was educated at Westminster School; matriculated at Christ Church, Oxford on 2 July 1774 ; was elected fellow of All Souls College in 1777 ; and graduated B.C.L. 27 April 1786, and D.C.L. 4 May following. After his ordination he was instituted to the family living of Sudbury. He became a canon of Christ Church, Oxford, 13 October 1785, and a prebendary of Gloucester on 10 November in the same year . He resigned his prebendal stall in 1791, but held his other appointments to 1808.

On 18 August 1791 he was nominated as the Bishop of Carlisle[2] in succession to John Douglas and was consecrated on 6 November following. For 16 years he administered the affairs of the see of Carlisle with good sense and discretion, spending more than the whole income of the see upon the wants of his diocese.[1]

After the death of Archbishop William Markiam. Venables-Vernon was nominated on 26 November 1807 as archbishop of York,[2] and was confirmed in St. James's Church, Westminster on 19 January 1808.[3] In the same year, on 20 January, he was gazetted a privy councillor, and made Lord High Almoner to George III, an office which he also held under Queen Victoria's reign. 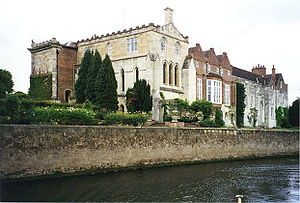 The Archbishops of Yorks residence: Bishopthorpe Palace (viewed from the Ouse in 1995)

Venables-Vernon was a member of the queen's council who had charge of George III during his illness. He was an eloquent speaker, and occasionally spoke in the House of Lords on ecclesiastical matters, but usually abstained from political contentions. He lived under five successive monarchs, and was respected for benevolence and simplicity of character. On 15 January 1831 he took the surname of Harcourt only on inheriting the large estates of the Harcourt family, which came to him on the death of his cousin, Field-marshal William, third and last Earl Harcourt.[1]

In 1835 he was appointed one of the first members of the ecclesiastical commission. In 1838 he was offered the renewal of the Harcourt peerage, but declined it, not wishing to be fettered in his parliamentary votes. York Minster twice suffered fires during his primacy, 1829 and 1841, and he contributed largely to both restorations. Archbishop Harcourt preached his valedictory sermon in York Minster on 13 November 1838. However Harcourt continued to enjoy good health, and as late as 1 November 1847 visited York and inspected the repairs of the chapterhouse. He died at the palace, Bishopthorpe, near York, on 5 November 1847, and was buried at Stanton Harcourt, Oxfordshire, 13 November[1]

On 5 February 1784 he married Anne Leveson-Gower, third daughter of Granville Leveson-Gower, 1st Marquess of Stafford, and they had sixteen children. His wife predeceased him at Bishopthorpe Palace on 16 November 1832, aged 72.

His second son, the Revd Leveson Vernon Harcourt,[4] was chancellor of York, an author of The Doctrine of the Deluge[5] and of other theological works. His fourth son was William Vernon Harcourt, the founder of the British Association for the Advancement of Science. Two of his sons became Admirals and his youngest daughter, Georgiana, distinguished herself as a translator.

As a director of the Ancient Concerts, Harcourt entertained his fellow-directors (the prince regent and Prince Adolphus – the Duke of Cambridge, the Duke of Cumberland (later Ernest Augustus I of Hanover), and the Duke of Wellington) at his house in Grosvenor Square on 23 February 1821. On the same night the Cato Street conspirators had designed the murder of the cabinet ministers at the house adjoining Harcourt's, where the ministers had agreed to dine with Lord Harrowby.[1]

An account of the life of Margaret Godolphin who died in 1678 was written by John Evelyn and this was passed down through his family to Harcourt. Harcourt allowed it to be published in 1847 with the assistance of the Bishop of Oxford.[7]