The FN MAG is a Belgian 7.62 mm general-purpose machine gun, designed in the early 1950s at Fabrique Nationale (FN) by Ernest Vervier. It has been used by more than 80 countries, and it has been made under licence in several countries, including Argentina, Canada, Egypt, India and the United Kingdom.[2] 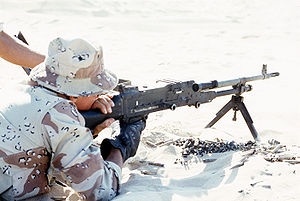 A U.S. Marine firing the British L7A2 version of the MAG. 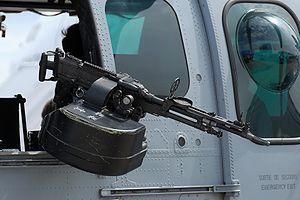 An FN MAG mounted on a Eurocopter EC 725 Cougar MkII at the 2007 Paris Air Show held at Le Bourget airport.

The MAG uses ignited powder gases vented through a port in the barrel to propel a gas piston rod connected to the locking assembly (it uses a long-stroke piston system). The barrel breech is locked with a vertically tilting, downward locking lever mechanism that is connected to the bolt carrier through an articulated joint. The locking shoulder and camming surfaces that guide the locking lever are located at the base of the receiver. The MAG uses a series of proven design concepts from other successful firearms, for example the locking mechanism is modeled on that of the Browning M1918 (BAR) automatic rifle, and the feed and trigger mechanisms are from the WWII-era MG42 universal machine gun.[4]

The MAG fires from an open bolt. Both the spring-powered extractor and ejector are contained in the bolt. After firing, spent cartridge casings are removed through an ejection port located at the base of the receiver (a spring-loaded dust cover of the MG42 type covers the ejection port). The machine gun has a striker firing mechanism (the bolt carrier acts as the striker as it contains a channel that houses the firing pin, which protrudes out from the surface of the bolt upon firing), an automatic-only trigger assembly and a manual cross-bolt push-button safety, which is located above the pistol grip. With the safety placed in the safe setting, the sear mechanism is disabled. The safety can only be engaged with the weapon cocked.[5]

The weapon feeds from the left side from open-link, metal ammunition belts: either the American disintegrating M13 belt (NATO standard) or the segmented German DM1 belt, whose 50-round sections can be linked through a cartridge. In order to adapt the weapon to feed from one belt type to the other, several components of the feed mechanism need to be reconfigured since the position of the feed tray's cartridge stop and pawl angles in the top cover are different. The MAG features a pawl-type feeding mechanism that continues to move the feed link during both the rearward and forward cycles of the reciprocating bolt carrier, producing a smooth belt flow. The feeding mechanism's three pawls are actuated by a roller connected to the bolt carrier. The feed channel rail, feed link, both feed slides and the feed tray are chrome plated. The top cover body is an anodized aluminum casting. In the infantry assault role, the weapon can be fitted with a sheet metal container that houses a 50-round belt and is attached to the left side of the receiver.[5]

The quick-change barrel has a slotted flash suppressor. The barrel's chamber and bore are chromium-lined and the barrel has four right-hand grooves with a 305 mm (1:12 in) rifling twist rate. Also attached to the barrel is the front sight base, carry handle and gas block (equipped with an exhaust-type gas regulator valve with three settings).[5]

The MAG is also equipped with a fixed wooden stock, pistol grip, carrying handle and iron sights that consist of a forward blade (adjustable mechanically for both windage and elevation) and a folding leaf rear sight with an aperture in the down position for firing distances from 200 to 800 m in 100 m increments and an open U-notch for ranges from 800 to 1,800 m graduated every 100 m. The rear sight is hinged to a base with protective ears that is integral with the receiver's upper forging.

The MAG's receiver is constructed from sheet metal stampings reinforced by steel plates and rivets. The front is reinforced to accept the barrel nut and gas cylinder which are permanently mounted. Guide rails that support the bolt assembly and piston extension during their reciprocating movement are riveted to the side plates. The bolt's guide rails are shaped downward to drive the locking lever into engagement with the locking shoulder, which is also riveted to the side plates. The rear of the receiver has been reinforced and slotted to accept the butt-stock.[5]

In the static machine gun role, the weapon is mounted on a tripod that offers a higher degree of accuracy and control than the bipod, for example the FN 360° tripod, which features an elevation adjustment mechanism that enables the weapon's bore axis to be maintained from 300 mm (11.8 in) to 600 mm (23.6 in), has a 30° to +15° elevation change and a 360° traverse range. 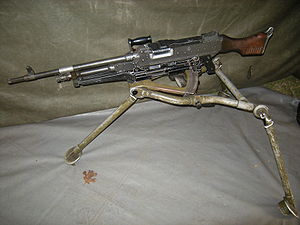 The vehicle-mounted variant of the MAG lacks a stock, bipod, carry handle, pistol grip, ejection port dust cover and a mount for optical sights. It does, however, have a new closed-type gas regulator. Depending on the weapon's employment, the machine gun can also be fitted with an extended charging handle linkage, standard trigger group (with a pistol grip), or a specialized trigger assembly with an electrically fired trigger.

The pintle-mounted aircraft model is fed from either the right- or left-hand side exclusively with the M13 belt. Thus configured, weapons typically lack standard iron sights and are equipped with electrically powered triggers.

The L7 general-purpose machine gun is used by the British Army.[10] The L7 and the related L8 are license-built derivatives of the MAG. The official British Army designation for the current version is the L7A2 GPMG (General Purpose Machine Gun). The L7 was adopted by the British forces as a replacement for the long-serving Vickers machine gun (in the medium role) and the Bren (in the light assault role), following trials in 1957. Built under license originally by Royal Small Arms Factory, Enfield Lock and currently by Manroy Engineering,[11] it serves in the British Army, the Royal Marines and other services. There have been two main variants, the L7A1 and L7A2, developed for infantry use, with the L7A2 having superseded the earlier variant. Several other variants have been developed, notably the L8 (produced in the L8A1 and L8A2 versions), modified for mounting inside armoured vehicles (the L37 variant was developed for mounting on armoured vehicles). Although intended to replace the Bren entirely, that light machine gun (re-titled as the L4) continued in use in jungle terrain (especially in the Far East), where there was no requirement for the medium machine gun role, and with secondary units, until the adoption of the L86A1 Light Support Weapon (LSW). The LSW was intended to replace both the L7 and the L4 in the light machine gun role, but dissatisfaction with the L86's sustained fire capabilities and reliability resulted in combat units continuing to utilize the L7 whenever possible (although neither it, nor its 7.62×51mm NATO ammunition were supposed to be issued to infantry platoons). The British Army and Royal Marines have since been issued with the L110A2 (FN Minimi Para) to replace the LSW as the light section support or fire support weapon. This uses the same NATO-standard 5.56×45mm ammunition as the L85 assault rifle. However, 7.62 mm L7 variants continue to be used in both dismounted roles and mounted on some British military vehicles, naval vessels, and aircraft.

In 1961, the Royal Small Arms Factory, Enfield (now BAE Systems) in the United Kingdom, undertook license production of the MAG in the following versions: L7A2, L8A2, L37A2, L20A1 and the L43A1. These models all use the M13 ammunition belt.

The L7A2, general-purpose machine gun, replaced the L7A1 in service with the British Army. Compared to the MAG Model 60-20, it features, among other minor changes, a 10-position gas regulator valve, a plastic butt-stock and a bracket, used to mount optical day- and night-vision sights, mounted to the left side of the receiver. In a stationary defensive role, the L7A2 can be mounted on the L4A1 tripod in conjunction with a periscope sight.

The L8A2 coaxial tank machine gun (replaced the L8A1) has a different gas valve switch (closed, single-position), when compared to the analogous Model 60-40, a different flash hider and a modified cocking handle. The weapon also has a trigger group that accepts electrical input and a lever in the feed tray that enables the belt to be removed without lifting the feed tray cover.

Another tank machine gun is the L37A2 (succeeded the L37A1) designed to be mounted on tank turrets, in the commander's position, on wheeled armoured vehicles and on armored personnel carriers. It differs from the L8A2 primarily in its trigger, which was adapted from the L7A2 GPMG. The machine gun can be used in the ground role for self-defense, by dismounted vehicle crew members, the egress kit consists of an L7A2 barrel, bipod and buttstock.

The L20A1 aircraft machine gun was based on the L8A2, from which it differs by having an electrical trigger and a slotted flash suppressor. The L20A1 can be converted to right-hand feed by changing several components in the feed mechanism.

The L43A1, also developed from the L8A2, is a coaxially mounted tank machine gun used to sight-in the vehicle's main gun by firing ballistically matched tracer ammunition at the target to confirm the trajectory visually. The weapon's barrel, fitted with a flash hider, has a reinforced and heavier structure that increases the weapon's accuracy especially during sustained fire.'

All versions are licence-manufactured by FFV-Carl Gustaf. The Swedish abbreviation for "kulspruta" (machine gun, lit. "bullet sprayer") is "ksp". "Strv" is the abbreviation of "Stridsvagn" (battle tank). 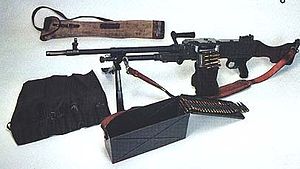 Kulspruta 58: Ksp 58, adapted in 1958 using the 6.5×55mm Mauser rifle cartridge which at that time was the standard cartridge in the Swedish Army.

Kulspruta 58 B: In the early 1970s, the weapon was modified with a new gas regulator and at the same time the barrels were replaced to the new standard 7.62 NATO, same as used by the Ak 4. Ksp 58 replaced the considerably heavier Ksp m/42B in the infantry units.

Kulspruta 58 C: On Combat Vehicle 90, this version replaced the previously used Ksp m/39 in the third quarter of 2004.

Kulspruta 58 Strv: stripped variant mainly used for fixed mounting in tanks. Phased out along with Stridsvagn 103.

Kulspruta 58 D: Reserved designation for the renovated and modified Ksp 58B. The trial version is referred to as 'Ksp 58 DF', where the 'F' stands for 'Försök' (Experimental). Some of the modifications:[14]

On January 14, 1977, the US Army awarded a contract to FN Herstal for the delivery of a modernized Model 60-40 variant tank machine gun designated the M240. Initially, the firearms were produced in Belgium. Currently they are manufactured in the US by FN's US wholly owned subsidiary FNMI (FN Manufacturing Inc.) located in Columbia, South Carolina, and by U.S. Ordnance in McCarran, Nevada.

The M240 is built in several versions: 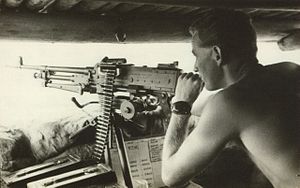 An Australian soldier in Borneo manning a British L7A1 during the Indonesia–Malaysia confrontation, 1965. 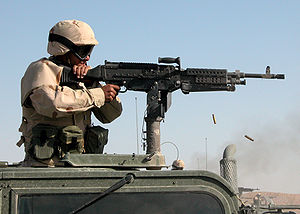 A sailor of a Naval Mobile Construction Battalion fires an M240B, a U.S. derivative of the MAG adopted for infantry use in the 1990s. 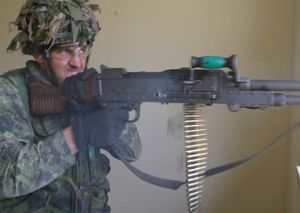 A Canadian soldier fires the C6 variant of the MAG. 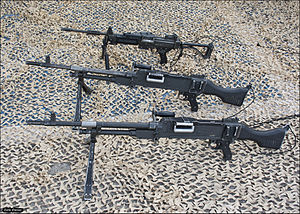