The LAV III, originally named the Kodiak by the Canadian Army, is the third generation of the Light Armoured Vehicle (LAV) family of Infantry fighting vehicle built by General Dynamics Land Systems first entering service in 1999.[1][2] It is based on the Swiss MOWAG Piranha IIIH 8x8.[3]

It was developed in Canada and is the primary mechanized infantry vehicle of the Canadian Army and the New Zealand Army.[1]

By 1994 after the Liberal Party had returned to government, the army was still in need of new vehicles. As a result, the army embarked on the Light Armoured Vehicle Project, which would adapt parts of the MRCV Project, and be implemented incrementally to spread out the costs. Also, the requirement to replace the Bisons was dropped. The first phase of the project saw the selection of the Coyote Reconnaissance Vehicle to replace the Lynx.

On August 16, 1995, it was announced that General Motors Diesel Division (later renamed GM Defense, and subsequently purchased by General Dynamics Land Systems of London, Ontario, had been awarded the contract to produce the LAV III which would replace the Grizzly and a large portion of the M113 armoured personnel carriers.[4] The LAV III would incorporate the turret and weapon system used with the Coyote (which was produced at the same location), and the latest, heaviest version of MOWAG's Piranha family which would be 'Canadianized' and built locally. 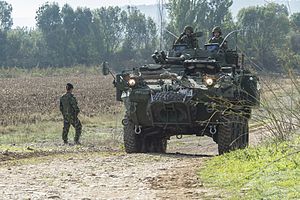 In July 2009, the Canadian Department of National Defence announced that $5 billion would be spent to enhance, replace and repair the army's armoured vehicles. Part of the spending would be used to replace and repair damaged LAV III's due to wear and tear from operations in Afghanistan. As much as 33 percent of the army's light armoured vehicles were out of service.[5] Furthermore, the LAV III's will be upgraded with improved protection and automotive components.[6] The Canadian Armed Forces has lost over 34 vehicles and 359 were damaged during the mission in Afghanistan. The Canadian army has lost 13 LAV's and more than 159 were damaged by roadside bombs or enemy fire.[7] Of the $5 billion announced, approximately 20% of it will be used to upgrade LAV III models. The upgrade will extend the LAV III life span to 2035. The remaining $4 billion is to be spent on a "new family of land combat vehicles".[8] The Department of National Defence considered the purchase of vehicles meant to accompany the Leopard 2 and to sustain the LAV III into combat. The CV90, the Puma (IFV) and the Véhicule blindé de combat d'infanterie were the most likely candidates for the role. A contract of 108 with an option for up to 30 more was considered,[9][10][11] but a combination of budget cuts and upgrades to the existing fleet of LAV IIIs have led the Canadian Army to cancel its order for 108 CV90s.[12]

On October 21, 2011 the Canadian government announced a $1.1 billion contract to General Dynamics Land Systems to upgrade 550 LAV III combat vehicles. The government said the upgrade is needed to improve protection against mines and improvised explosive devices (IEDs), which have been the cause of a number of Canadian deaths in Afghanistan. The improvements will also extend the service of the vehicles up to 2035 and will boost troop mobility.[13][14][15] The upgrades include a new and more powerful engine, increased armour protection, steering and brake systems. The turret hatches on the LAV III would be made larger and improved fire control, thermal, day and low-light sights, and data displays. The weight of the vehicle would increase from 38,000 pounds (17,000 kg) to 55,000 pounds (25,000 kg).[16][17] The first of 66 upgraded LAV IIIs was delivered on February 1, 2013.[18] The success of the upgrade program and budget pressures lead to the cancellation of the Close Combat Vehicle replacement program later that year.[19] 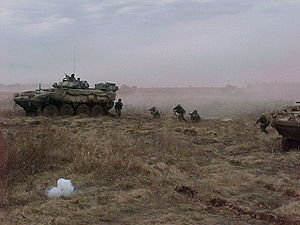 Infantry dismounting from a LAV III at CFB Gagetown

The LAV III is powered by a Caterpillar 3126 diesel engine developing 350|hp|kW when chip locked to protect the driveline from damage, but over 400HP if unlocked for wartime. If unlocked it requires full-time 8x8 to avoid damaging the T-case and differentials}, and can reach speeds above 100 kilometres per hour.[20] The vehicle is fitted with 8x8 drive and also equipped with a central tire inflation system, which allows it to adjust to different terrain, including off-road.[21][22] The LAV III is fitted with a modern anti-locking brake system (ABS) and a traction control system (TCS).[23] Unlike earlier versions of the LAV, the LAV III does not have amphibious capabilities. 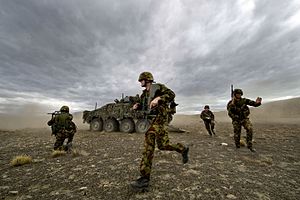 The LAV III can somewhat compensate for these effects by deflating its tires slightly, meaning that the surface area in contact with the ground increases, and the ground pressure is slightly lowered.

However, wheels offer several advantages over tracked vehicles, including lower maintenance for both the vehicle and road infrastructure, quieter movement for improved stealth, greater speed over good terrain, and higher ground clearance for protection against mines and improvised explosive devices.

The LAV III's turret gives the vehicle a higher centre of gravity than the vehicle was initially designed for. This has led to concerns that the vehicle is more likely to roll over on uneven terrain.

While there have been several recorded rollovers (about 16),[24] the most common cause was found to be unstable terrain, specifically road shoulders unexpectedly giving away beneath the vehicle.[25] The weight balance of the LAV III is taken into consideration during driver training, largely mitigating the chances of a rollover. 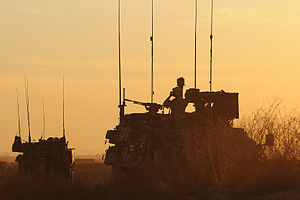 The basic armour of the LAV III, covering the Standardization Agreement STANAG 4569 level III, which provides all-round protection against 7.62×51mm NATO small calibre rounds. A ceramic appliqué armour (MEXAS) can be added, which protects against 14.5×114mm heavy calibre rounds from 500 meters. In December 2008 the Government of Canada awarded EODC Engineering, Developing and Licensing Inc. C$81.5 million worth of contracts to provide for add-on-armour kits, modules and spares for its LAV III wheeled armoured personnel carriers.[26][27] This armour kit is intended to provide increased protection against improvised explosive devices (IED), explosively formed penetrators and 30 mm caliber armour piercing rounds.[26][28][29][30][2][31] The LAV III can be also fitted with cage armour, which provides protection against shaped charges. The LAV III is fitted with a nuclear, biological, chemical (NBC) filtration system accompanied with a GID-3 chemical detector and AN/VDR-2 radiation detector systems.[32] The LAV III was designed to produce a very low and very compact structure to minimize radar and IR-signatures. The LAV III also uses heat-absorbing filters to provide temporary protection against thermal imaging (TIS), image intensifiers and infrared cameras (IR). General Dynamics is in the process of integrating the LAV III with an active protection system[33] based on the Israeli Trophy system.[34]

The majority of Canadian casualties in Afghanistan have occurred during a patrol aboard a LAV III.[35] This can be explained by the fact that the LAV III is the most commonly used Canadian armoured personnel carrier in theatre, and simply represents a normal association between use and likelihood to encounter a mine or improvised explosive device.[36] The LAV III offers comparable or better protection than most other infantry carriers used in Afghanistan. In an effort to improve protection as a result of experiences in Afghanistan, future LAV III upgrades will likely include improved mine and IED protection.[37]

The LAV III is fitted with a two-man turret, armed with the M242 Bushmaster 25 mm caliber chain gun and a coaxial 7.62-mm machine gun. One more 5.56 mm or 7.62 mm machine guns is positioned on top of the turret. The LAV III also has eight 76-mm grenade launchers in two clusters of four launchers positioned on each side of the turret. The grenade launchers are intended for smoke grenades.[20] In 2009, a number of LAV III's were modified with a Nanuk remotely controlled weapon station (RCWS) to provide better protection and to increase the chances of survival of the crew against improvised explosive devices and anti-tank mine threats on the battlefield.[38] 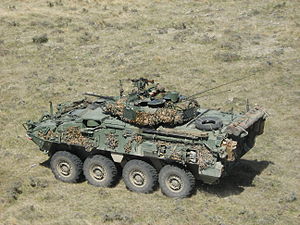 The LAV III and related versions have been used in the following:

The New Zealand armed forces purchased 105 LAV. 102 were standard vehicles and 3 were LAV redesigned for recovery. In May 2009 two NZLAVs were deployed to support police during the 2009 Napier shootings. They defended police while they retrieved a deceased police officer's body.

In November 2009 it was announced that three NZLAVs would be deployed to assist NZSAS operations in Afghanistan, and they were up-armoured.[39] In 2011 these three LAVs were moved to Bamyan to support the provincial reconstruction team there as they were no longer needed in Kabul due to reduced SAS numbers. Five additional LAVs were also flown to Bamyan. One has since been damaged by a roadside bomb. In May 2012 the New Zealand government announced that it may leave all these LAVs behind in Afghanistan for use by local forces when the New Zealand forces leave in 2013.[citation needed] As of November 2013 all of these deployed LAVs had been returned to New Zealand. 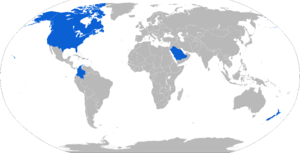 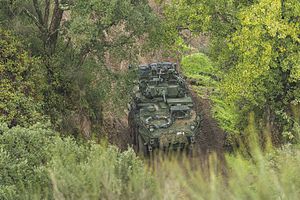