The Royal Netherlands Army (Dutch: Koninklijke Landmacht (KL), "Royal Army") is the land forces element of the military of the Netherlands.

The Royal Netherlands Army was raised on 9 January 1814—however, its origins date back to 1572, when the so-called Staatse Leger was raised. Therefore, the Netherlands has one of the oldest standing armies in the world, dating back to the 16th century. It fought during the Napoleonic Wars, World War II, the Indonesian War of Independence, Korean War, and served with NATO on the Cold War frontiers in Germany from the 1950s to the 1990s.

Since 1990, the army has deployed to the Iraq War from 2003 and the War in Afghanistan (2001-present), as well as a number of United Nations peacekeeping deployments, notably with UNIFIL in Lebanon, and UNPROFOR in Bosnia-Herzegovina in 1992–1995.

The Royal Netherlands Army was raised on 9 January 1814, but its origins date back to 1572, when the so-called Staatse Leger was founded. Therefore, the Netherlands operates one of the world's oldest standing armies, dating back to the 16th century. This army of the Dutch Republic was one of the less organised, and not well trained armies of the 17th and early 18th century, and saw actions in the Eighty Years War, the Dano-Swedish War (1658–1660), the Franco-Dutch War, the Nine Years War, the War of Spanish Succession, the War of Austrian Succession, and the French Revolutionary Wars until the French conquered the Netherlands in early 1795.

The Staatse Leger was replaced by the army of the Batavian Republic in 1795, which in turn was replaced by the army of the Kingdom of Holland in 1806. It fought alongside the French in the Anglo-Russian Invasion of Holland in 1799 and several campaigns in Germany, Austria and Spain between 1800 and 1810. Most notable were the engagements of the Horse Artillery (Korps Rijdende Artillerie) at the Battle of Friedland in 1807, the capture of the city of Stralsund in 1807 and 1809 and the participation of the Dutch brigade in the Peninsular War between 1808 and 1810. The independent army was disbanded in 1810 when Napoleon decided to 'reunite' Holland into France ("La Hollande est reunie à l'Empire"). The army units became part of the Grande Armée. The present day French 126th Infantry Regiment has Dutch origins. Dutch army elements participated in the French invasion of Russia in 1812. Most notable were the actions of the Pontonniers company under Captain Benthien at the Berezina River (Battle of Berezina). New research points out that, contrary to what is currently believed, approximately half of the Dutch contingent of the Grande Armée survived the Russian Campaign.[2]

Kingdom of the Netherlands, 1814 to present

An independent Dutch army was resurrected by the new Kingdom of the United Netherlands in 1814, following the Orangist uprising against Napoleonic rule in 1813. This new force, the Netherlands Mobile Army, formed an integral part of the allied army during the Hundred Days Campaign that culminated in the Battle of Waterloo. Units such as Baron Chassé's were key in securing victory for the allied army. Since 1814, (elements of) the army have been involved in several military conflicts (Waterloo campaign 1815, several colonial wars 1825–1925, and the Belgian Revolution 1830–1832.

At the beginning of the Second World War, the I Corps was the force strategic reserve and was located in the Vesting Holland, around The Hague, Leiden, Haarlem and in the Westland. The Royal Netherlands Army was defeated in May 1940 and only began to rise again with the formation of the Princess Irene Brigade Group in exile. In the Far East, the Royal Netherlands East Indies Army was defeated by the Japanese in 1942; few elements managed to escape. Today's army grew out of the wartime force, starting with the liberation of parts of the Netherlands in 1944; the Dutch had plans to contribute a 200,000 strong army to the defeat of Germany and Japan.[3]

The I (Netherlands) Corps stood watch alongside its NATO allies in Germany during the Cold War. The corps consisted of three divisions during the 1980s, the 1st, 4th, and 5th (reserve) divisions.[4] It was part of the NATO Northern Army Group. The corps's war assignment, as formulated by Commander, Northern Army Group (COMNORTHAG), would be to:[5]

During the early 1990s I (NL) Corps was reduced to the First Division 7 December, which became part of I. German/Dutch Corps, and then later the division headquarters itself was disbanded.

568 AIFV (YPR-765) infantry fighting vehicles were in service until June 2012, while of a total of 445 Leopard 2 MBTs originally purchased, 114 tanks and 1 turret were sold to Austria, 100 to Canada, 57 to Norway, 1 driver training tank and 10 turrets to Germany and 38 to Portugal (1 driver training tank). On April 8, 2011 the Dutch Ministry of Defense dissolved the last tank unit and sold the remaining Leopard tanks due to large budget cuts.[6] On May 18, 2011 the last Leopard 2 fired the final shot at the Bergen-Hohne Training Area.[7]

Dutch army troops have deployed to Lebanon as part of an international protection force since 1979 War in Lebanon, 1979–1985 UNIFIL. Of the 9,084 soldiers who served in Lebanon, 9 soldiers died. Among the units that contributed troops to Dutchbat South Lebanon was 44 Armoured Infantry Battalion (44 painfbat) from the Regiment Infanterie Johan Willem Friso. All 9,084 Soldiers received the medal for peace keeping under war circumstances.

Dutch army troops have deployed to Bosnia-Herzegovina as part of a United Nations protection force since 1992 and criticized by human rights organizations due to the role during Srebrenica massacre in which 8.000 Bosniaks were killed in Bosnia.[8]

Dutch army troops have deployed to Kosovo as part of the NATO Kosovo Force since 1999.

A contingent of 1,345 troops (comprising Landmacht and Dutch Marines, supported by Royal Netherlands Air Force helicopters) was deployed to Iraq in 2003, based at Camp Smitty near As Samawah (Southern Iraq) with responsibility for the Muthanna Province, as part of the Multinational force in Iraq. On June 1, 2004, the Dutch government renewed their stay through 2005. The Netherlands pulled its troops out of Iraq in March 2005, leaving half a dozen liaison officers until late 2005. The Dutch Government reportedly turned down an Iraqi Government request to extend the Dutch contingent for another year. The Netherlands lost 2 soldiers in separate attacks. On 18 April 2008 the son of the Army commander, lieutenant Dennis van Uhm, was one of the two killed by a road side explosion.

In mid 2006, Dutch Special Forces Korps Commandotroepen teams deployed successfully to Tarin Kowt in Afghanistan, to lay the ground for the increasing numbers of engineers who were building a vast base there. At the same time other special forces units from other nations deployed throughout the area, and worked closely together in this volatile area. By August 2006 the Netherlands deployed the majority of 1,400 troops to Uruzgan province at southern Afghanistan at Tarin Kowt (1,200), at Kamp Holland, and Deh Rahwod (200). [2] The soldiers of Task Force Uruzgan were mostly from the Regiment Van Heutsz, supplemented with soldiers from 44 Pantserinfanteriebataljon Regiment Johan Willem Friso and the 42 Tankbataljon Regiment Huzaren Prins van Oranje. PzH 2000 self-propelled artillery pieces were deployed and used in combat for the first time. Since 2006, Dutch forces were involved in some of the more intensive combat operations in southern Afghanistan, including Operation Medusa and the Battle of Chora. As of 10 August 2008, The Netherlands had a total of 1,770 troops in Afghanistan not including special forces troops. 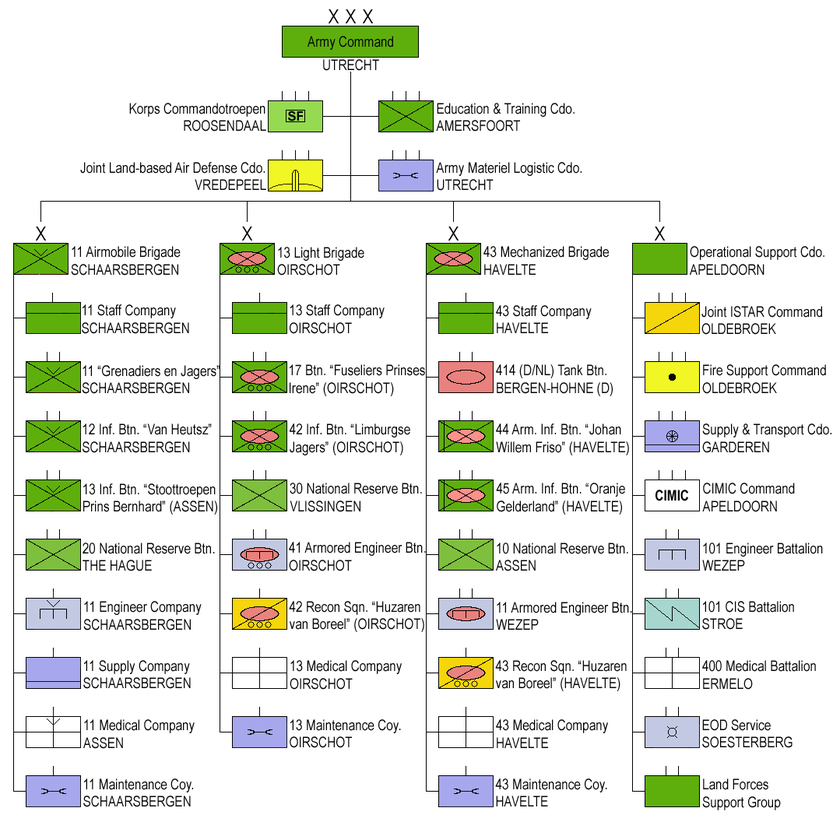 Unlike many other military organizations, Dutch Army soldiers are represented by various unions. The four main unions are: 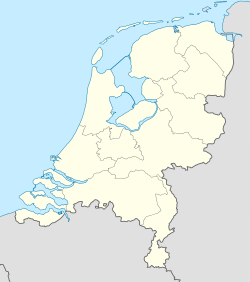 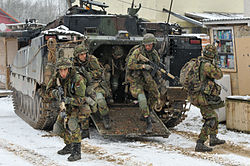 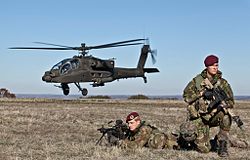 Each infantry regiment of the Royal Netherlands Army consists of a single battalion. The current order of battle includes a total of seven infantry battalions - of these, two are classed as foot guards and the remainder as line infantry:

The military academy of the Royal Netherlands Army is the Koninklijke Militaire Academie in Breda.

The Netherlands and Germany work together in a Bi-national Army Corps structure, the I. German/Dutch Corps. This is a rapid deployable Army Corps headquarters that can be deployed in the frame of the NATO Response Force. The permanent elements of this corps are a bi-national Staff Support Battalion and a bi-national Communications and Informations Battalion. The Staff Support Battalion consists of a bi-national staff support company and a logistics company. The battalion is based at Münster (Germany) and Eibergen (Netherlands). The 101 Communications and Informations Battalion is based in Eibergen and Garderen.

There are thousands of vehicles in several versions: