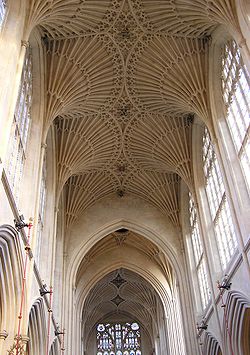 Fan vaulting over the nave at Bath Abbey, Bath, England. Made from local Bath stone, this is a Victorian restoration (in the 1860s) of the original roof of 1608.

A fan vault is a form of vault used in the Gothic style, in which the ribs are all of the same curve and spaced equidistantly, in a manner resembling a fan. The initiation and propagation of this design element is strongly associated with England.

The earliest example, dating from about the year 1351,[1] may be seen in the cloisters of Gloucester Cathedral.[2] The largest fan vault in the world can be found in the chapel of King's College, Cambridge.

The fan vault is peculiar to England. The lierne vault of the cathedral of Barbastro in Spain closely resembles a fan vault, but it does not form a perfect conoid. Harvey (1978) suggests Catherine of Aragon as a possible source of English influence in Aragon.[3]

Birth of the fan vault

The fan vault is attributed to development in Gloucester between 1351 and 1377,[3] with the earliest known surviving example being the east cloister walk of Gloucester Cathedral.[4] Harvey (1978) hypothesises that the east cloister at Gloucester was finished under Thomas de Cambridge (Thomas de Cantebrugge) from Cambridge, Gloucestershire, who left in 1364 to work on the chapter house at Hereford Cathedral (also thought to have been fan vaulted on the basis of a drawing by William Stukeley).[5] The other three parts of the cloister at Gloucester were begun in 1381, possibly under Robert Lesyngham.

Other examples of early fan vaults exist around Gloucester, implying the activity of several 14th century master masons in this region, who really created the fan vault and experimented with forms of its early use.

The ribs of a fan vault are of equal curvature and rotated at equal distances around a central (vertical) axis, forming the conoid shape which gives rise to the name. In between sequences of conoids, flat central spandrels fill the space. According to Leedy (1980), the fan vault was developed in England (as opposed to France and other centres of gothic architecture) due to the manner in which English rib vaults were normally constructed.[6] In an English rib vault, the courses are laid perpendicular to the rib while in France they are laid perpendicular to the wall.