The Abbey Church of St Mary the Virgin, Tewkesbury, (commonly known as Tewkesbury Abbey), in the English county of Gloucestershire, is the second largest parish church in the country and a former Benedictine monastery. It is one of the finest examples of Norman architecture in Britain, and has probably the largest Romanesque crossing tower in Europe. 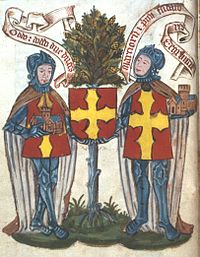 Oddo and Doddo, brothers and Dukes of Mercia, Saxon founders of Tewkesbury Abbey. Latin titulus above: Oddo : Doddo duc(es) duas Marciorum et primi fundatores Teokburie ("Oddo & Doddo two Earls of the Marches and first founders of Tewkesbury"). Each knight is in armour and bears in his hand a model of a church. Both are supporting a shield (affixed to a pomegranate tree) bearing the attributed arms of themselves and of the Abbey Gules a cross or. Tewkesbury Abbey Founders Book, folio 8 verso, Bodleian Library, Oxford 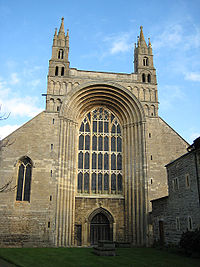 The tall Norman arch of the facade is unique in England

The Chronicle of Tewkesbury records that the first Christian worship was brought to the area by Theoc, a missionary from Northumbria, who built his cell in the mid-7th century near a gravel spit where the Severn and Avon rivers join together. The cell was succeeded by a monastery in 715, but nothing remaining of it has been identified.

In the 10th century the religious foundation at Tewkesbury became a priory subordinate to the Benedictine Cranborne Abbey in Dorset.[1] In 1087, William the Conqueror gave the manor of Tewkesbury to his cousin, Robert Fitzhamon, who, with Giraldus, Abbot of Cranborne, founded the present abbey in 1092. Building of the present Abbey church did not start until 1102, employing Caen stone imported from Normandy and floated up the Severn.

Robert Fitzhamon was wounded at Falaise in Normandy in 1105 and died two years later, but his son-in-law, Robert FitzRoy, the natural son of Henry I who was made Earl of Gloucester, continued to fund the building work. The Abbey's greatest single later patron was Lady Eleanor le Despenser, last of the De Clare heirs of FitzRoy. In the High Middle Ages, Tewkesbury became one of the richest abbeys of England.

After the Battle of Tewkesbury in the Wars of the Roses on 4 May 1471, some of the defeated Lancastrians sought sanctuary in the abbey. The victorious Yorkists, led by King Edward IV, forced their way into the abbey; the resulting bloodshed caused the building to be closed for a month until it could be purified and re-consecrated.

At the Dissolution of the Monasteries, the last abbot, John Wakeman, surrendered the abbey to the commissioners of King Henry VIII on 9 January 1539. Perhaps because of his cooperation with the proceedings, he was awarded an annuity of 400 marks and was ordained as the first Bishop of Gloucester in September 1541.[2] Meanwhile, the people of Tewkesbury saved the abbey from destruction. Insisting that it was their parish church which they had the right to keep, they bought it from the Crown for the value of its bells and lead roof which would have been salvaged and melted down, leaving the structure a roofless ruin. The price came to £453.

The bells merited their own free-standing belltower, an unusual feature in English sites. After the Dissolution, the bell-tower was used as the gaol for the borough until it was demolished in the late 18th century.

The central stone tower was originally topped with a wooden spire, which collapsed in 1559 and was never rebuilt. Some restoration undertaken in the 19th century under Sir Gilbert Scott included the rood screen that replaced the one removed when the Abbey became a parish church.

Flood waters from the nearby River Severn reached inside the Abbey during severe floods in 1760, and again on 23 July 2007. 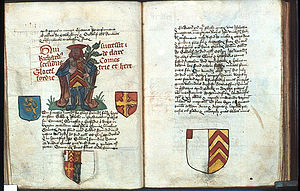 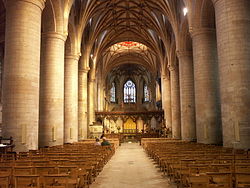 The nave of Tewkesbury Abbey 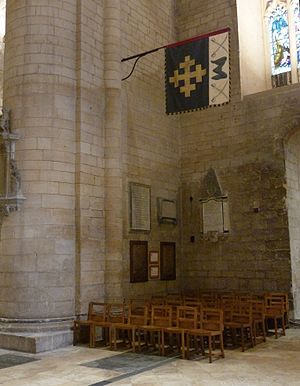 The church itself is one of the finest Norman buildings in England. Its massive crossing tower was said to be "probably the largest and finest Romanesque tower in England" by Sir Nikolaus Pevsner. Fourteen of England's cathedrals are of smaller dimensions, while only Westminster Abbey contains more medieval church monuments. 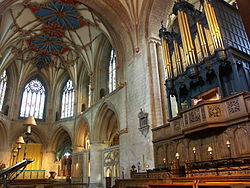 The organ and east end 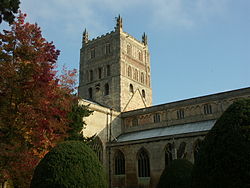 The tower is the largest Romanesque crossing tower in Europe.

The bells at the Abbey were overhauled in 1962. The ring is now made up of twelve bells, hung for change ringing, cast in 1962, by John Taylor & Co of Loughborough.[15] The inscriptions of the old 5th and 10th bells are copied in facsimile onto the new bells. The bells have modern cast iron headstocks and all run on self-aligning ball bearings. They are hung in the north-east corner of the tower, and the ringing chamber is partitioned off from the rest of the tower. There is also a semitone bell (Flat 6th) also cast by Taylor of Loughborough in 1991.

The Abbey bells are rung from 10:15am to 11:00am every Sunday except the first Sunday of the month (a quarter peal). There is also ringing for Evensong from 4:00pm to 5:00pm, except on the third Sunday (a quarter peal) and most fifth Sundays. Practice takes place each Thursday from 7:30pm to 9:00pm.[15]

The market town of Tewkesbury developed to the north of the abbey precincts, of which vestiges remain in the layout of the streets and a few buildings: the Abbot's gatehouse, the Almonry barn, the Abbey Mill, Abbey House, the present vicarage and some half-timbered dwellings in Church Street. The Abbey now sits partly isolated in lawns, like a cathedral in its cathedral close, for the area surrounding the Abbey is protected from development by the Abbey Lawn Trust, originally funded by a United States benefactor in 1962.[17] 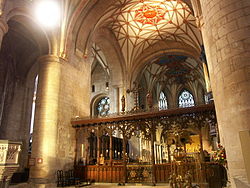 The chancel and decorated vault

The Abbey possesses, in effect, two choirs. The Abbey Choir sings at Sunday services, with children (boys and girls) and adults in the morning, and adults in the evening. Schola Cantorum is a professional choir of men and boys based at Dean Close Preparatory School and sings at weekday Evensongs as well as occasional masses and concerts. The Abbey School Tewkesbury, which educated, trained and provided choristers to sing the service of Evensong from its foundation in 1973 by Miles Amherst, closed in 2006; the choir was then re-housed at Dean Close School, Cheltenham, and renamed the Tewkesbury Abbey Schola Cantorum. 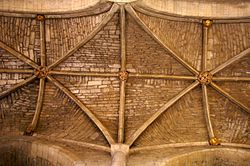 For the most part, worship at the Abbey has been emphatically High Anglican. However, in more recent times there has been an acknowledgement of the value of less solemn worship, and this is reflected in the two congregational services offered on Sunday mornings. The first of these (at 9.15am) is a Parish Eucharist, with modern language and an informal atmosphere; a parish breakfast is typically served after this service. The main Sung Eucharist at 11am is solemn and formal, including a choral Mass; traditional language is used throughout, and most parts of the service are indeed sung, including the Collect and Gospel reading. Choral Evensong is sung on Sunday evenings, and also on Monday, Tuesday, Thursday and Friday during the week. A said Eucharist also takes place every day of the week, at varying times, and alternating between traditional and modern language. Each summer since 1969 (with the exception of 2007 when the town was hit by floods) the Abbey has played host to Musica Deo Sacra, a festival combining music and liturgy. Photography in the Abbey is restricted.[20]