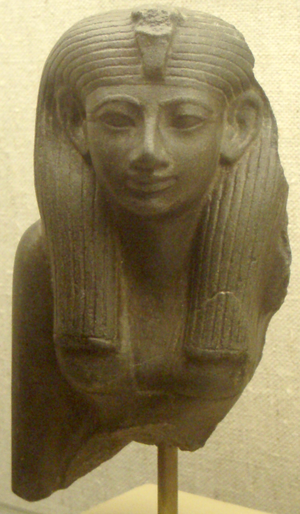 Hatshepsut was Great Royal Wife to Thutmose II, then regent for her stepson Thutmose III (Museum of Fine Arts, Boston)

Great Royal Wife, or alternatively Chief King's Wife (Ancient Egyptian: ḥmt nswt wrt), is the term that was used to refer to the principal wife of the pharaoh of Ancient Egypt. The former is also, in the form of the simplification Great Wife, applied to more contemporary royal consorts in states all over modern Africa (e.g., Mantfombi Dlamini of Swaziland, chief consort of the Zulu King).

While most Ancient Egyptians were monogamous, the pharaoh would have had other, lesser wives and concubines in addition to the Great Royal Wife. This arrangement would allow the pharaoh to enter into diplomatic marriages with the daughters of allies, as was the custom of ancient kings.[1]

Meretseger, the chief wife of Senusret III, is the earliest queen whose name appears with this title; she also was the first consort known to write her name in a cartouche.[6] However, she is only attested in the New Kingdom[7] so the title might be an anachronism. Perhaps the first holder of its title was Nubkhaes of the Second Intermediate Period.

A special place in the history of great royal wives was taken by Hatshepsut. She was Great Royal Wife to her half-brother Thutmose II. During this time Hatshepsut also became a God's Wife of Amun (the highest ranking priestess in the temple of Amun in Karnak). After the death of her husband, she became regent because of the minority of her stepson, the only male heir (born to Iset), who eventually would become Thutmose III. While he was still very young, however, Hatshepsut was crowned as pharaoh and ruled very successfully in her own right for many years. Although other women before her had ruled Egypt, Hatshepsut was the first woman to take the title, pharaoh, as it was a new term being used for the rulers, not having been used before the eighteenth dynasty. When she became pharaoh, she designated her daughter, Neferure, as God's Wife of Amun to perform the duties of a priestess. Her daughter may have been the great royal wife of Thutmose III but there is no clear evidence for this proposed marriage.[8]

Elsewhere, in Kush and other major states of ancient Africa, the rulers often structured their households in much the same way as has just been described. This practice has continued to the present day, with the most senior polygamous spouses of contemporary African royals often being referred to by the honorific Great Wife. 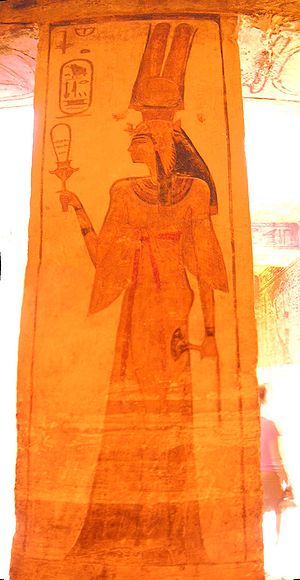 Nefertari, the Great Royal Wife of Ramasses II, from the temple he built to honour her at Abu Simbel, she holds a sistrum and a sacred lotus