Thutmose IV (sometimes read as Thutmosis or Tuthmosis IV and meaning Thoth bore him) was the 8th Pharaoh of the 18th dynasty of Egypt, who ruled in approximately the 14th century BC. His prenomen or royal name, Menkheperure, means "Established in forms is Re."[1] 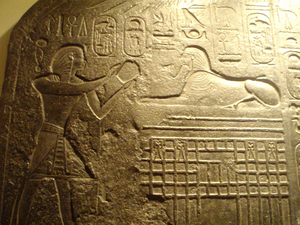 Close-up of a scene from the Dream Stele depicting Thutmose IV giving offerings to the Great Sphinx of Giza. From a full-sized reproduction on display at the Rosicrucian Egyptian Museum, San Jose.

Thutmose IV was born to Amenhotep II and Tiaa but was not actually the crown prince and Amenhotep II's chosen successor to the throne. Some scholars speculate that Thutmose ousted his older brother in order to usurp power and then commissioned the Dream Stele in order to justify his unexpected kingship. Thutmose's most celebrated accomplishment was the restoration of the Sphinx at Giza and subsequent commission of the Dream Stele. According to Thutmose's account on the Dream Stele, while the young prince was out on a hunting trip, he stopped to rest under the head of the Sphinx, which was buried up to the neck in sand. He soon fell asleep and had a dream in which the Sphinx told him that if he cleared away the sand and restored it he would become the next Pharaoh. After completing the restoration of the Sphinx, he placed a carved stone tablet, now known as the Dream Stele, between the two paws of the Sphinx.The restoration of the Sphinx, and the text of the Dream Stele would then be a piece of propaganda on Thutmose's part, meant to bestow legitimacy upon his unexpected kingship.[2] Little is known about his brief ten-year rule. He suppressed a minor uprising in Nubia in his 8th year (attested in his Konosso stela) around 1393 BC and was referred to in a stela as the Conqueror of Syria,[3] but little else has been pieced together about his military exploits. Betsy Bryan who penned a biography of Thutmose IV stresses that Thutmose IV's Konosso stela appears to refer to a minor desert patrol action on the part of the king's forces to protect certain gold-mine routes in Egypt's Eastern Desert from occasional attacks by the Nubians.[4] Thutmose IV's rule is significant because he established peaceful relations with Mitanni and married a Mitannian princess to seal this new alliance. Thutmose IV's role in initiating contact with Egypt's former rival, Mitanni, is documented by Amarna letter EA 29 composed decades later by Tushratta, a Mittanian king who ruled during the reign of Akhenaten, Thutmose IV's grandson. Tushratta states to Akhenaten that:

Dates and length of reign 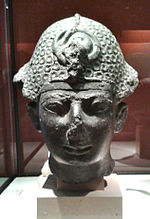 Dating the beginning of the reign of Thutmose IV is difficult to do with certainty because he is several generations removed from the astronomical dates which are usually used to calculate Egyptian chronologies, and the debate over the proper interpretation of these observances has not been settled. Thutmose's grandfather Thutmose III almost certainly acceded the throne in either 1504 or 1479, based upon two lunar observances during his reign,[6] and ruled for nearly 54 years.[7] His successor Amenhotep II, Thutmose IV's father, took the throne and ruled for at least 26 years[8] but has been assigned up to 35 years in some chronological reconstructions.[9] The currently preferred reconstruction, after analyzing all this evidence, usually comes to an accession date around 1401 BC[10] or 1400 BC[11] for the beginning of Thutmose IV's reign.

The length of his reign is not as clear as one would wish. He is usually given about nine or ten years of reign. Manetho credits him a reign of 9 years and 8 months.[12] However, Manetho's other figures for the 18th dynasty are frequently assigned to the wrong kings or simply incorrect, so monumental evidence is also used to determine his reign length.[13] Of all of Thutmose IV's dated monuments, three date to his first regnal year, one to his fourth, possibly one to his fifth, one to his sixth, two to his seventh, and one to his eighth.[14] Two possible other dated objects, one dated to a Year 19 and another year 20, have been suggested as belonging to him, but neither have been accepted as dating to his reign.[14] The reading of the king in these dates are today accepted as referring to the prenomen of Thutmose III—Menkheperre—and not Menkhepe[ru]re Thutmose IV himself. Due to the absence of higher dates for Thutmose IV after his Year 8 Konosso stela,[15] Manetho's figures here are usually accepted.[12] There were once chronological reconstructions which gave him a reign as long as 34–35 years.[12][16] Today, however, most scholars ascribe give him a 10-year reign from 1401 to 1391 BC, within a small margin of error. 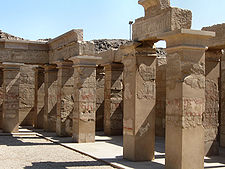 Like most of the Thutmoside kings, he built on a grand scale. Thutmose IV completed the eastern obelisk first started by Thutmose III, which, at 32 m (105 ft), was the tallest obelisk ever erected in Egypt, at the Temple of Karnak.[3] Thutmose IV called it the tekhen waty or 'unique obelisk.' It was transported to the grounds of the Circus Maximus in Rome by Emperor Constantius II in 357 AD and, later, "re-erected by Pope Sixtus V in 1588 at the Piazza San Giovanni" where it is today known as the 'Lateran Obelisk."[17]

Thutmose IV also built a unique chapel and peristyle hall against the back or eastern walls of the main Karnak temple building.[18] The chapel was intended "for people "who had no right of access to the main [Karnak] temple. It was a 'place of the ear' for the god Amun where the god could hear the prayers of the townspeople."[19] This small alabaster chapel and the and peristyle hall of Thutmose IV [20] has today been carefully restored by French scholars from the Centre Franco-Egyptien D'Étude des Temple de Karnak (CFEETK) mission in Karnak.[21] 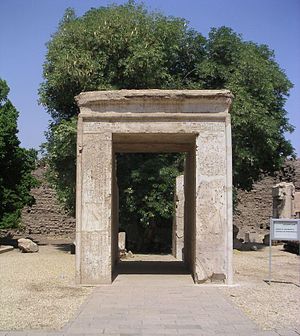 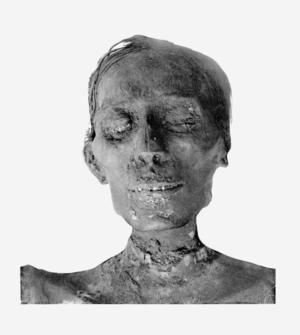 Thutmose IV was buried in the Valley of the Kings, in tomb KV43, but his body was later moved to the mummy cache in KV35, where it was discovered by Victor Loret in 1898. An examination of his body shows that he was very ill and had been wasting away for the final months of his life prior to his death. He was succeeded to the throne by his son, Amenhotep III.

Recently a surgeon at Imperial College London analysed the early death of Thutmose IV and the premature deaths of other Eighteenth dynasty Pharaohs (including Tutankhamun and Akhenaten). He identifies that their early deaths was likely as a result of a familial temporal epilepsy. This would account for the untimely mortality in Thutmose IV and can also explain his religious vision described on the Dream Stele due to this type of epilepsy’s association with intense spiritual visions and religiosity.[22]