From Infogalactic: the planetary knowledge core
Jump to: navigation, search
For other uses, see Harborne (disambiguation).

Harborne is an area of south-west Birmingham, England three miles (5 km) southwest from Birmingham city centre. It is a Birmingham City Council ward in the formal district and in the parliamentary constituency of Birmingham Edgbaston. 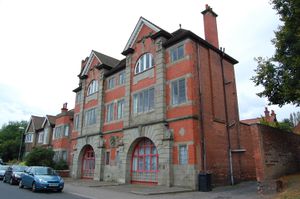 The former City of Birmingham fire station, now divided up and converted into private homes. 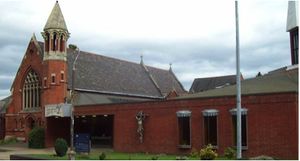 Harborne is a thriving and prosperous Victorian suburb with a large stock of housing dating from pre-1900 found mainly around the High Street, and the early 20th century. The oldest part of what is known locally as 'Harborne Village' is centred on St Peter's Church, Church of England, Old Church Road, which dates from Anglo-Saxon times (St Chad preached there) and whose tower was (re)constructed in the 14th century.

There is also some evidence of a Roman fort around the Queen Elizabeth Hospital Birmingham and Metchley Park,[2][3] near Harborne.

The earliest written mention of Harborne is an entry in the Domesday Book of 1086,[4] however the settlement pre-dates this.

As a non-Quaker area of the city, Harborne became well-supplied with public houses compared to nearby areas such as Edgbaston and Bournville. There is a famous "Harborne Run" pub crawl consisting of from 10 to 15 pubs (the agreed itinerary varies).

The spelling of Harborne has appeared with several variations through the centuries, and the derivation of the place name has often been disputed. One of the more probable suggestions is 'boundary brook', although 'high brow' and 'dirty brook' are also possibilities.

St Mary’s Church was the first Roman Catholic congregation formed by the Passionists who worshiped in a disused Methodist Chapel on Harborne High Street from 1870. Building work started on the current church, in Vivian Road, on 8 September 1875 and it opened on 6 February 1877. The Augustinians (Austin Friars) arrived at St Mary’s in 1973 to a growing catholic population and work on a new church, attached to the side of the old church, started on 1 August 1977 and was finished in 56 weeks. The St Mary's Parish Centre was opened in 1990 and is next door to the church.

Harborne railway station, at the end of the short Harborne Branch Line off the LMS Birmingham-Wolverhampton line at Ladywood, opened on 10 August 1874. It closed to passengers on 26 November 1934 and to freight traffic in November 1963.[5] It is now the Harborne Walkway, a two-mile (3 km) nature walk and cycling route from Harborne to Ladywood, where the canal can be followed either to Birmingham or Wolverhampton.

Many residents of the area are academics from the nearby University of Birmingham, as well as medical staff from nearby hospitals including the Queen Elizabeth Hospital.

Harborne is currently served by Harborne Library which formally opened on 12 November 1892, occupying a former Masonic Hall, which was built in 1879.[6] 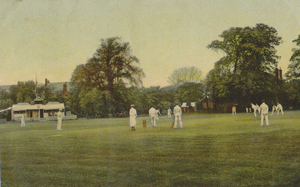 The former West Bromwich Albion, Ireland and Leeds United legend Johnny Giles has been residing in Harborne for many years.[7]

Edward Augustus Freeman was born in Metchley Abbey in 1823 and was a noted historian appointed Regius Professor of Modern History at Oxford.

From 1865 to 1870, Elihu Burritt, a US Consul sent by Abraham Lincoln, resided in Harborne in a house called New Britain Villas, Victoria Road, which still stands. Burritt was a social activist, working to promote international peace.

Harborne's most notable resident was W. H. Auden - the present day swimming baths stand on the site of his childhood home.

Other famous residents include landscape painter David Cox, the composer Granville Bantock and Thomas Attwood[4] who became the first MP from Birmingham.

The Nobel Prize-winning chemist and physicist Francis William Aston was born in Harborne on 1 September 1877.[8]

The Arts and Crafts silversmith George Edward Hunt resided in Harborne from about 1900 until his death in 1960.[9]

The former England cricketer Dennis Amiss was born in Harborne on 7 April 1943.[10]

In the mid/late 1990s Ocean Colour Scene lived just down the road from the High Street.[11]

Jerome Wallington, the first person to perform as Tiny Tim in the world premier of Leslie Bricusse's Scrooge the Musical at the Alexandra theatre Birmingham and who subsequently recorded the original cast sound track at Abbey Road Studios in London was born in Harborne in 1982. Ben Richards, starred in The Bill, grew up in Harborne.

Keith Law lived for a while in Croftdown Road.[citation needed]

Soap actress, Corrinne Wicks who is best known for her role as Dr Helen Thompson in the BBC soap Doctors and her 2010 role as Ella Hart in Emmerdale, resides in Harborne.[12]

Harborne ward forms part of the Birmingham Edgbaston constituency at Westminster, currently represented by Labour's Gisela Stuart. At local government level, Harborne ward is represented on Birmingham City Council by two councillors from the Labour Party, including James McKay, cabinet member for a Green, Safe and Smart City, and one councillor from the Conservative Party, John Alden.[13] The former leader of Birmingham City Council Mike Whitby was a councillor in Harborne from 1997 to 2014 and was made a life peer taking the title of Baron Whitby, of Harborne in the City of Birmingham.[14]

The ward has a Ward Support Officer.[4]

Harborne is served by the National Express West Midlands bus routes: 004 (Hansons), 10H (igo), 11A, 11C, 22, 23, 24, 29, 29A, 48, 99 and 647 (Diamond). [15] The suburb had a railway station which opened in 1874. The station however closed to passenger traffic in 1934 and to freight in 1963. As of 2013, Harborne's nearest railway station is the busy University station on the Cross-City Line, which has a frequent service to Birmingham New Street railway station. University station is a twenty-minute walk away from Harborne. The Harborne Railway has closed down. Harborne station was a one-minute walk away from the high street.