Construction started in 1965 on a new airport to handle travel to nearby naval bases. The new airport was dedicated on September 1, 1968, replacing Imeson Field;[3] terrain precluded longer runways at Imeson. A new idea at JIA was separating departing and arriving passengers on different sides of the terminal (as can be seen in the photo on this page). This is no longer the case, and the airport (which has greatly expanded since the picture was taken) now uses the more typical layout with departing passengers on an upper level with an elevated roadway, and arriving passengers on the lower level.

The new airport was slow to expand, only serving two million passengers a year by 1982, but it served over five million annually by 1999 and an expansion plan was approved in 2000. The first phase, which included rebuilding the landside terminal, the central square and main concessions area, as well as consolidating the security checkpoints at one location, and more parking capacity was completed in 2004–2005. In 2007, 6,319,016 passengers were processed.

The airport's two runways form a "V" (with the tip of the "V" pointing west). A plan exists to build two more runways, each paralleling one existing runway. The one alongside the existing southern runway will be built first. No date has been set (the expectation is that construction of the third runway would begin around 2015).

Concurrent with the closure of Imeson Airport, the 125th Fighter-Interceptor Group (125 FIG) of the Florida Air National Guard (FANG) relocated to Jacksonville International Airport. Military Construction (MILCON) funds provided for the establishment of Jacksonville Air National Guard Base in the southwest quadrant of the airport and placement of USAF-style emergency arresting gear on the JAX runways. Jacksonville ANGB is literally a small air force base, albeit without the military housing, military hospital or other infrastructure of major U.S. Air Force installations. The Air National Guard provides a fully equipped USAF Crash Fire Rescue station to augment the airport's own fire department for both on-airport structural fires and aircraft rescue and firefighting (ARFF) purposes. The base employs approximately 300 full-time military personnel (ART and AGR) and 1,000 part-time military personnel who are traditional air national guardsmen.[5] 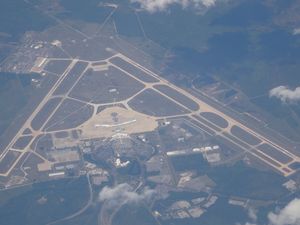 An aerial view of the airfield.

On June 7, 1988, an Air National Guard F-16 fighter jet hit 2 wild pigs on the airport's runway while attempting to land. The jet veered off the runway, and pilot Lt. Col. Sam Carter was forced to eject. Carter suffered minor injuries and commented: "It’s a very inglorious way for a $16 million aircraft to come to an end". Both pigs died.[11] 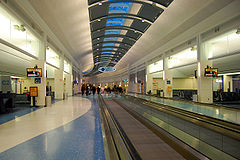 The second phase of the expansion program[15] is being carried out over three years, commencing in mid-2006 and is projected to cost about $170 million. The new Concourses A and C are now open; the former concourses have been demolished. Work on Concourse B was given a low priority because the capacities of Concourses A and C were more than adequate for existing demand. The expansion was designed by Reynolds, Smith & Hills[16]

The economic downturn of 2009 caused a decrease in passengers and flights. This prompted the JAA to commence the demolition of Concourse B in June 2009 because it was safer and easier for the contractor. The remains will eventually become part of an airline club lounge. After the debris was removed, asphalt was laid for ground equipment parking. The concourse will be rebuilt when passenger traffic increases, which the JAA projected in 2013.[17]

Also included is a further expansion of the parking system and a new automated baggage screening system.

Both of the newer concourses house ten gates each and have moving walkways.

Future plans call for expanding the newly built concourses by 2020 and possibly adding a people mover system to the airport and connecting the airport with the onsite DoubleTree Suites via a moving walkway.

On May 19, 2011, JetBlue Airways began service to San Juan.[18] Jacksonville and Puerto Rico have business ties because Puerto Rico is the main destination for cargo exported through the port of Jacksonville. JetBlue no longer flies the Jacksonville - San Juan route. JetBlue has announced new service to Reagan Airport in Washington, DC.

Allegiant Air began to operate from the airport in February from Concourse C.

Concourse A Gates are all in use currently despite what map shows. Silver Airways (Now A1) and JetBlue (Now A2 and A4) have flipped gates.