Rutland was born at Belvoir Castle, the younger son of John Manners, 5th Duke of Rutland by Lady Elizabeth Howard, daughter of Frederick Howard, 5th Earl of Carlisle. Charles Manners, 6th Duke of Rutland was his elder brother and Lord George Manners his younger brother. He was educated at Eton College, then entered Trinity College, Cambridge in 1836.[1] At Cambridge, he was a member of the University Pitt Club.[2] He graduated MA in 1839, and was later awarded the honorary degrees of LLD by the same university in 1862, and DCL by Oxford in 1876.[1]

He wrote two books of poetry: England's Trust and Other Poems, published in 1841, and English Ballads and Other Poems, published in 1850. The 1841 book contains his famous quote: "Let wealth and commerce, laws and learning die, But leave us still our old Nobility!"[3] The 1850 book contains his poem "A Legend of Haddon Hall."[4] 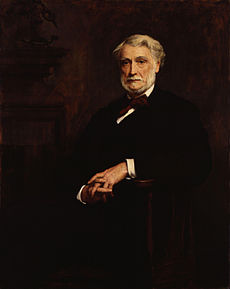 In 1841 Rutland was returned for Newark in the Tory interest, along with William Ewart Gladstone, and sat for that borough until 1847. Subsequently he sat for Colchester, 1850–57; for North Leicestershire, 1857–85; and for Melton from 1885 until, in 1888, he took his seat in the House of Lords upon succeeding to the dukedom.

In the early 1840s Manners was a leading figure in the Young England movement, led by Benjamin Disraeli. He accompanied the latter on a tour of English industrial areas in 1844, advocated public holidays (outlined in 1843 in his pamphlet, "In Defence of Holy Days"),[5] factory reforms and an allotments system.[1]

During the three short administrations of Lord Derby (1852, 1858–59, and 1866–68) he sat in the cabinet as First Commissioner of Works. In 1852 he was admitted to the Privy Council. On the return of the Conservatives to power in 1874 he became Postmaster-General under Disraeli, and was made GCB on his retirement in 1880. He was again Postmaster-General in Lord Salisbury's administration, 1885–86, and was head of the department when sixpenny telegrams were introduced. Finally, in the Conservative government of 1886–92 he was Chancellor of the Duchy of Lancaster. He was made a Knight of the Garter in 1891 and in 1896 he was further honoured when he was made Baron Roos of Belvoir, in the County of Leicester.

He was patron of Saint Martin's League for letter carriers.

Rutland married firstly Catherine Louisa Georgina, daughter of George Marley, in 1851. They had one child:

Catherine died in April 1854. Rutland married secondly Janetta, daughter of Thomas Hughan, in 1862. They had seven children, including:

Rutland succeeded to the dukedom of Rutland in March 1888, upon the death of his elder brother. The Duchess of Rutland died in July 1899. Rutland survived her by seven years and died on 4 August 1906, aged 87, at Belvoir Castle.