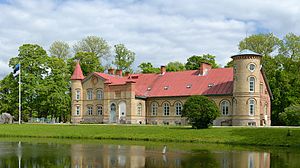 Karl Ernst von Baer was born into a Baltic German noble family in the Piep estate, Kreis Jerwen, Governorate of Estonia (in present-day Lääne-Viru County, Estonia), as a knight by birthright. He spent his early childhood at Lasila manor, Estonia.[4][1][2][3] Many of his ancestors had come from Westphalia. He was educated at the Knight and Cathedral School in Reval (Tallinn) and the Imperial University of Dorpat (Tartu), each of which he found lacking in quality education. In 1812, during his tenure at the university, he was sent to Riga to aid the city after Napoleon's armies had laid siege to it. As he attempted to help the sick and wounded, he realized that his education at Dorpat had been inadequate, and upon his graduation, he notified his father that he would need to go abroad to "finish" his education. In his autobiography, his discontent with his education at Dorpat inspired him to write a lengthy appraisal of education in general, a summary that dominated the content of the book. After leaving Tartu, he continued his education in Berlin, Vienna, and Würzburg, where Ignaz Döllinger introduced him to the new field of embryology.

In 1817, he became a professor at Königsberg University (Kaliningrad) and full professor of zoology in 1821, and of anatomy in 1826. In 1829, he taught briefly in St Petersburg, but returned to Königsberg. In 1834, Baer moved back to St Petersburg and joined the St Petersburg Academy of Sciences, first in zoology (1834–46) and then in comparative anatomy and physiology (1846–62). His interests while there were anatomy, ichthyology, ethnography, anthropology, and geography. While embryology had kept his attention in Königsberg, then in Russia von Baer engaged in a great deal of field research, including the exploration of the island Novaya Zemlya. The last years of his life (1867–76) were spent in Dorpat, where he became a leading critic of Charles Darwin.[5] 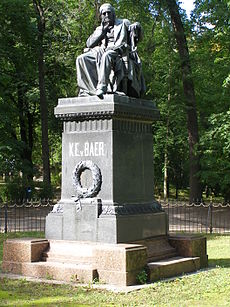 Statue of Karl Ernst von Baer on Toome Hill, Tartu: As a tradition, students wash the statue's head with champagne every Walpurgis Night.[6]

von Baer studied the embryonic development of animals, discovering the blastula stage of development and the notochord. Together with Heinz Christian Pander and based on the work by Caspar Friedrich Wolff, he described the germ layer theory of development (ectoderm, mesoderm, and endoderm) as a principle in a variety of species, laying the foundation for comparative embryology in the book Über Entwickelungsgeschichte der Thiere (1828). In 1826, Baer discovered the mammalian ovum. The first human ovum was described by Edgar Allen in 1928. In 1827, he completed research Ovi Mammalium et Hominis genesi for St Petersburg's Academy of Science (published at Leipzig[7][8]) and established that mammals develop from eggs.[9]

He formulated what became known as Baer's laws of embryology:

From his studies of comparative embryology, Baer had believed in the transmutation of species but rejected later in his career the theory of natural selection proposed by Charles Darwin. He produced an early phylogenetic tree revealing the ontogeny and phylogeny of vertebrate embryos.[10]

In the third edition of On the Origin of Species published in 1861, Charles Darwin added a Historical Sketch giving due credit to naturalists who had preceded him in publishing the opinion that species undergo modification, and that the existing forms of life have descended by true generation from pre-existing forms. According to Darwin:

"Von Baer, towards whom all zoologists feel so profound a respect, expressed about the year 1859... his conviction, chiefly grounded on the laws of geographical distribution, that forms now perfectly distinct have descended from a single parent-form."[11]

Baer was also a believer in a teleological force in nature which has been compared to a form of evolutionary orthogenesis.[12][13]

The term Baer's law is also applied to the unconfirmed proposition that in the Northern Hemisphere, erosion occurs mostly on the right banks of rivers, and in the Southern Hemisphere on the left banks. In its more thorough formulation, which Baer never formulated himself, the erosion of rivers depends on the direction of flow, as well. For example, in the Northern Hemisphere, a river flowing from south to north, according to the theory, erodes on its right bank, while in the same hemisphere, a river flowing north to south erodes on its left, due to the coriolis effect.[14]

Baer was interested in the northern part of Russia, and explored Novaya Zemlya in 1837, collecting biological specimens. Other travels led him to the Caspian Sea, the North Cape, and Lapland. He was one of the founders of the Russian Geographical Society.[citation needed]

He was a pioneer in studying biological time – the perception of time in different organisms.

A statue honouring him can be found on Toome Hill in Tartu, as well as at Lasila manor, Estonia, and at the Zoological Museum in St Petersburg, Russia. Before the Estonian conversion to the euro, the 2-kroon bank note bore his portrait. Baer Island in the Kara Sea was named after Karl Ernst von Baer for his important contributions to the research of Arctic meteorology between 1830 and 1840.[20]