From Infogalactic: the planetary knowledge core
Jump to: navigation, search
File:Blok M Jakarta.jpg
Blok M shopping center and terminal, with the Sudirman Central Business District in the background, are located in the Subdistrict of Kebayoran Baru, South Jakarta.

Kebayoran Baru is a subdistrict of South Jakarta, Jakarta, Indonesia. Kebayoran Baru was the last residential area to be developed by the Dutch colonial administration. The urban planning was laid in a concept of the Garden city movement, consisting of a well-planned residential area, a shopping center, and a business district, supported with civic facilities e.g. schools, places of worship, hospitals, and parks. Many important governmental institutions are located in Kebayoran Baru, such as the Indonesia Stock Exchange building, the City Hall of South Jakarta, and the ASEAN Secretariat building.

Kebayoran Baru consists of the word Kebayoran (from kabayuran, meaning "stockpiles of bayur wood (Pterospermum javanicum)")[1][2] and Baru (Indonesian for "new"). Several stockpiles of timber (including bayur wood) were built there in earlier time. Bayur wood is known for its strength and resistance to termite attack.[3] 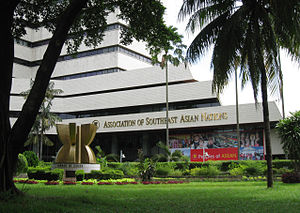 The ASEAN secretariate building is located in the garden city-planned Kebayoran Baru.

The idea to build a satellite town Kebayoran Baru to accommodate the growing population of Jakarta was launched in 1948. The development of the planning was a quick one, in comparison with the slow building process experienced elsewhere. The government had already approved the plan by September 1948, just two months after it was first presented. Immediately thereafter the government began to purchase the land; and by 17 January 1949 the whole area had been purchased. On February 1949, Moh. Soesilo completed the first draft of the town plan and a month later construction work started.[4]

The first area to be designed is now located around Kebayoran station, on the east side of Grogol River. The construction was done by a Dutch construction company Centrale Stichting Wederopbouw (CSW), whose office was established near the current Judicial Palace building (Kejaksaan Agung) on June 1, 1948.[5] The construction of Kebayoran Baru was started on March 8, 1949, and was completed in 1955.[6] The office building of CSW was located near the Judicial Palace building (Kejaksaan Agung).

Kebayoran Baru was divided into several blocks (blok A to S) based on its land use and the size of the building:

Most buildings in Kebayoran Baru were designed following the principle of functionalism, that is making use of the latest building material (reinforced concrete) and taking into consideration the principle of tropical design - to maximize natural lighting while minimizing the heat without the use of electricity. For housings, appears the so-called Yankee-type or Jengki style, so called because of its heavy influence from the American post-war modernism. For example, middle class houses in Kebayoran were designed with square or rectangular layout, but the first floor is tilted forward to protect the facade of the lower level from the sun. Lower-level official houses in Kebayoran make use of front patio. Larger villas in Kebayoran were usually designed by well-known Indies architects at that time such as Job & Sprey and Liem Bwan Tjie.[7] The current Kebayoran Baru Subdistrict also includes some villages which is not part of the original plan. This additions are now located in Radio area, Gandaria Utara, and Cipete Utara.

Being a design older than 50 years, Kebayoran Baru is considered a cultural heritage (Cagar Budaya) according to Law no. D.IV-6099/d/33/1975.[2] New modern international style developments in the area has been a threat to the historic tropical residential character of Kebayoran Baru.[8]

Compared to the situation of subdistricts in Jakarta, Kebayoran Baru is a well-planned subdistrict, both in term of its urban planning and its infrastructure. The Jendral Sudirman main road connects Kebayoran Baru to the city center in Central Jakarta.

The southern quarter of the Semanggi Junction is located in Kebayoran Baru.

Kebayoran Baru is one of the most affluent areas of Jakarta, where many wealthy citizens reside. Many prominent Indonesians live in the district, including Jusuf Kalla (Vice President of Indonesia and business tycoon), Guruh Soekarnoputra (son of Soekarno and an artist), Hary Tanoesoedibjo (Indonesian media tycoon), and Tomy Winata (businessman and the owner of Artha Graha Bank), among others. Kebayoran Baru, along with the subdistrict of Menteng, are the most expensive residential districts in Indonesia, having very high land prices per square foot.

Although Kebayoran Baru, in the Soekarno era, was solely a residential area, the district now harbors many commercial ventures, being known for its lifestyle businesses. The southern part of the neighborhood is filled with large mansions with lots ranging from 500 square meters to 6000 square meters. The northern part of the city is dominated by luxury apartments and office buildings.[citation needed] Senayan is notable for its large concentration of businesses run by Korean expatriates in Indonesia, a trend which began as early as 1982.[9]

The subdistrict of Kebayoran Baru is divided into ten kelurahan or administrative villages: 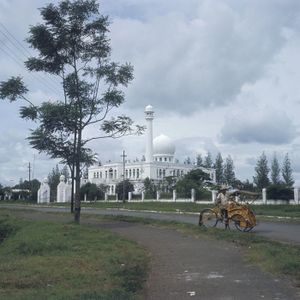 The Al-Azhar Mosque in Kebayoran Baru