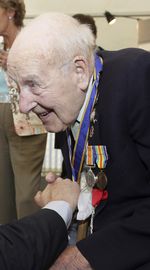 Jeanetta Jane Thomas (2 December 1869 – 5 January 1982)[2] of Llantrisant, Wales was a British supercentenarian and was mentioned in the Guinness Book of Records in the 1980s. Thomas spent her youth in London working as a seamstress. At the age of around 40, she returned to Wales to open a drapery shop, which she ran until the age of 98.[23] She was also the oldest living person in the United Kingdom from 20 October 1980 until her death, at the age of 112 years and 34 days.

From the age of 107, Thomas resided at a nursing home at Cowbridge, Wales.[23] A photograph of her, which was taken the day before her 112th birthday, appeared in The Times. Had Thomas lived another six days, she would have broken the British longevity record which at that time was held by Alice Stevenson. Thomas still holds the record for the oldest Welsh-born woman ever, although Welshman John Evans and English-born Anna Eliza Williams (who died in Wales) both lived longer.

Daisy Irene Adams (née Woodward; 30 June 1880 – 8 December 1993) was for about nine months the oldest person in the UK, between 17 March 1993 and her death on 8 December 1993. She was from Church Gresley, Derbyshire. She died at the age of 113 years and 161 days, and outlived her husband and three of her five children. Her husband died at the first day of the Battle of the Somme, meaning that she was widowed in her thirties. Adams was a teetotaler and ate little. Her son Ted put her longevity down to "living a quiet life".[24]

Rebecca Hewison (née Ramsdale; 19 October 1881 – 22 September 1994) was a British supercentenarian and the oldest person living in Britain until her death aged 112 years, 338 days.[25] Born in Grimsby, Hewison was the fourth child of six born to Will, a timber merchant, and Betsy-Ann Ramsdale. She married George Hewison, a stonemason, in Grimsby in 1905. In 1938 she moved to be with her daughter Frances in North London. Later in 1963 the family moved to Berrynarbor in Devon until Hewison was 105 when she returned to her hometown of Grimsby. In 1990 she met the Queen Mother at RAF Scampton. She also was a supporter of Grimsby Town football club and met the team in 1991, the year she turned 110 and also the year that the team completed a second successive promotion. Hewison was also taken for flights in aeroplanes and helicopters at Humberside Airport.

Lucy Jane Askew (8 September 1883 – 9 December 1997) was an English supercentenarian and the oldest person in Europe at the time of her death at the age of 114 years and 92 days. Askew was born and died in Loughton, Essex. She was born to Arthur George Askew and Susan Elizabeth Askew née Ellis, prosperous landowners. Lucy had five other siblings, all of whom she outlived, although three of them also lived past 100. Askew never married and was a devout Christian. Askew moved into a nursing home when she was 106 and survived a leg operation at 108. She was in good health until shortly before her death when she died peacefully in her sleep. She attributed her longevity to a modest lifestyle.[26][27]

Louisa Shephard née Williams (14 September 1898 – 19 January 2010) was a British supercentenarian. At the time of her death aged 111 years 127 days, Shephard, of Blaenavon, was the third oldest person in the United Kingdom, and the oldest person in Wales following the death of Victoria May Owen on 9 May 2007. She was one of the fifty oldest British people. She attributed her longevity to "hot milk with a dash of whiskey each evening".[28][29]

Ethel Eliza Wood (16 January 1901 at St Sampson, Guernsey - 19 August 2011)[1] from Kirby-le-Soken, Essex was a British supercentenarian. At the age of 110, Wood was the ninth oldest verified person in the United Kingdom following the death of 112-year-old Margaret Fish on 12 March 2011.

She was one of five children born to William and Lily Wood. Wood trained as a teacher in London prior to the German occupation of Guernsey. Like her siblings, she never married or had children. She moved to Essex in the 1990s to care for her younger sister, Edith. Wood lived in her own home until breaking her leg during a fall a month before her 110th birthday. She died suddenly on 19 August 2011, aged 110 years, 215 days. If she had lived until December of that year, she would have surpassed the only other supercententenarian from the Channel Islands, Margaret Ann Neve (1792 – 1903).[30][31]

Mrs. Watson lived there for three and a half decades. Also in 1974, the same house where she and her husband celebrated their golden wedding. Her husband Samuel died a few days later due to a long-term illness.

She credited her longevity to a healthy lifestyle and laughter.[32]

Janet Sheed Roberts (née Gordon; 13 August 1901 – 6 April 2012)[1] from Craigellachie was a Scottish supercentenarian. At the age of 110, Roberts was the sixth oldest living person in the United Kingdom following the death of 111-year-old Margaret Cooke on 18 March 2012, and the oldest living person in Scotland. She was the last surviving granddaughter of the famous distiller and enterpreneur William Grant. Bottles of whisky were produced in her honour to mark her 100th, 105th, 107th and 110th birthdays. She died on 6 April 2012, at the age of 110 years, 237 days, in her home.[33]