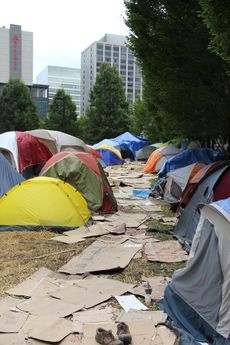 Mellon Green is an urban park in Downtown Pittsburgh, Pennsylvania.

The green, bounded by Grant Street, Ross Street, and Oliver and Sixth avenues, is surrounded by many prominent downtown buildings including the U.S. Steel Tower, BNY Mellon Center (the long-time global headquarters of Mellon Financial), the Omni William Penn Hotel and is on top of the Steel Plaza Subway station and its retail and officespace. It has long been a popular lunchtime destination for downtown workers.

The park opened in 1985 along with the completion of BNY Mellon Center. In the early 1990s the still largely undeveloped landscape was slated to become the "City Center" Retail/Office complex extending two blocks east to Ross Street and Interstate 579 and to include at least one high-rise and two mid-rise skyscrapers.[1] Due to changing demographics/shopping patterns in the mid-1990s and the credit crunch/recession that lasted through 1994, the project was scrapped and the "Mellon Green" landscaping and parkscaping concept was developed by the end of the decade.

In 2011, it was the base for the Occupy Pittsburgh protest.