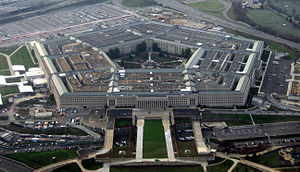 The Pentagon, outside Washington D.C. 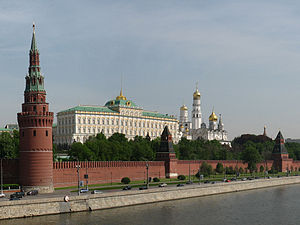 The Kremlin in Moscow

The Moscow–Washington hotline (formally known in the United States as the Washington-Moscow Direct Communications Link[1]) is a system that allows direct communication between the leaders of the United States and Russia. This hotline was established in 1963 and links the Pentagon with the Kremlin (historically, with Soviet Communist Party leadership across the square from the Kremlin itself[1]).[2] Although in popular culture known as the "red telephone", the hotline was never a telephone line, and no red phones were used. The first implementation used Teletype equipment, and shifted to fax machines in 1986.[3] Since 2008, the Moscow–Washington hotline is a secure computer link over which messages are exchanged by email.[4]

Several people came up with the idea for a hotline. They included Harvard professor Thomas Schelling, who had worked on nuclear war policy for the Defense Department previously. Schelling credited the pop fiction novel Red Alert (the basis of the film Dr. Strangelove) with making governments more aware of the benefit of direct communication between the superpowers.[1] In addition, Parade magazine editor Jess Gorkin personally badgered 1960 presidential candidates John F. Kennedy and Richard Nixon, and buttonholed the Soviet premier Nikita Khrushchev during a U.S. visit to adopt the idea.[1] During this period Gerard C Smith, as head of the State Department Policy Planning Staff, proposed a direct communications links between Moscow and Washington. Objections from others in the State Department, the U.S. military, and the Kremlin delayed introduction.[1]

The 1962 Cuban Missile Crisis made the hotline a priority. During the standoff, official diplomatic messages typically took six hours to deliver; unofficial channels, such as via television network correspondents, had to be used too as they were quicker.[1]

During the crisis, the United States took nearly twelve hours to receive and decode Nikita Khrushchev's 3,000-word initial settlement message – a dangerously long time. By the time Washington had drafted a reply, a tougher message from Moscow had been received, demanding that U.S. missiles be removed from Turkey. White House advisers thought faster communications could have averted the crisis, and resolved it quicker. The two countries signed the Hot Line Agreement in June 1963 - the first time they formally took action to cut the risk of starting a nuclear war unintentionally.[5]

The "hotline", as it would come to be known, was established after the signing of a "Memorandum of Understanding Regarding the Establishment of a Direct Communications Line" on June 20, 1963, in Geneva, Switzerland, by representatives of the Soviet Union and the United States.[3]

At the Pentagon, the hotline system is located at the National Military Command Center. Each MOLINK (Moscow Link) team[1] historically worked an eight-hour shift: a non-commissioned officer looked after the equipment, and a commissioned officer who was fluent in Russian and well-briefed on world affairs was translator.[1]

The hotline was tested hourly.[1] U.S. test messages have included excerpts of William Shakespeare, Mark Twain, encyclopedias, and a first-aid manual;[1] Soviet tests included passages from the works of Anton Chekhov.[1] MOLINK staffers take special care not to include innuendo or literary imagery that could be misinterpreted, such as passages from Winnie the Pooh, given that a bear is considered the national symbol of Russia.[1] The Soviets also asked, during the Carter Administration, that Washington not send routine communications through the hotline.[1]

On New Year's Eve and on August 30, the hotline's anniversary, greetings replace the test messages.[1]

Upon receipt of the message at the NMCC, the message is translated into English, and both the original Russian and the translated English texts are transmitted to the White House Situation Room.[1] However, if the message were to indicate "an imminent disaster, such as an accidental nuclear strike," the MOLINK team would telephone the gist of the message to the Situation Room duty officer who would brief the president before a formal translation was complete.[1]

The Republican Party criticized the hotline in its 1964 national platform; it said the Kennedy Administration had "sought accommodations with Communism without adequate safeguards and compensating gains for freedom. It has alienated proven allies by opening a 'hot line' first with a sworn enemy rather than with a proven friend, and in general pursued a risky path such as it began at Munich a quarter century ago."[6]

The Moscow–Washington hotline was intended for text only; speech might be misinterpreted. Leaders wrote in their native language and messages were translated at the receiving end.[7] 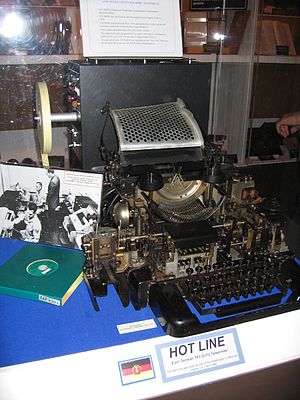 An East German Siemens T63-SU12 teleprinter from the hotline, as displayed in the National Cryptologic Museum of the NSA. The black box behind the teleprinter is an ETCRRM II encryption machine.

The first generation of the hotline used a full-time duplex wire telegraph circuit. This was routed from Washington, D.C. via London, Copenhagen, Stockholm and Helsinki to Moscow. TAT-1, the first submarine transatlantic telephone cable carried messages from Washington to London. A secondary radio line for back-up and service messages linked Washington and Moscow via Tangier. This network was originally built by Harris Corporation.[8]

A device called Electronic Teleprinter Cryptographic Regenerative Repeater Mixer II (ETCRRM II) encrypted the teletype messages. This used the unbreakable one-time pad cryptosystem. Each country delivered keying tapes used to encode its messages via its embassy abroad. An advantage of the one-time pad was that neither country had to reveal more sensitive encryption methods to the other.[10]

In September 1971, Moscow and Washington decided to upgrade the system. The countries also agreed for the first time when the line should be used. Specifically, they agreed to notify each other immediately in the event of an accidental, unauthorized or unexplained incident involving a nuclear weapon that could increase the risk of nuclear war.[11][12][13] Two new satellite communication lines supplemented the terrestrial circuits using two US Intelsat satellites, and two Soviet Molniya II satellites. This arrangement lasted from 1971 to 1978; it made the radio link via Tangier redundant.

In May 1983, President Reagan proposed to upgrade the hotline by the addition of high-speed facsimile capability. The Soviet Union and the United States agreed formally to do this on July 17, 1984.

According to the agreement, upgrades were to take place through use of INTELSAT satellites and modems, facsimile machines, and computers. [14] The facsimile terminals were operational by 1986.[3] The teletype circuits were cut in 1988 after several years of testing and use proved the fax links to be reliable. The Soviets transferred the hotline link to the newer, geostationary Gorizont-class satellites of the Statsionar system.[15]

In 2007 the Moscow–Washington hotline was upgraded; a dedicated computer network links Moscow and Washington. The new system started operations on January 1, 2008.[4] It continues to use the two satellite links but a fiber optic cable replaced the old back-up cable. Commercial software is used for both chat and email: chat to coordinate operations, and email for actual messages. Transmission is nearly instantaneous.

The first message transmitted over the hotline was on August 30, 1963. Washington sent Moscow the text—"The quick brown fox jumped over the lazy dog's back 1234567890". This included all the Latin alphabet, as well as all Arabic numerals and the apostrophe, to test that the keyboard and printer were working correctly. The Soviets sent back a poetic description of Moscow's setting sun.

The next use of the hotline (other than tests) was during the Six-Day War in 1967. The superpowers informed each other of military actions that might have appeared provocative or ambiguous.[16] The main concern was the closeness of the Soviet Black Sea Fleet and the US 6th Fleet in the Mediterranean and how to prevent possible misunderstanding between the two groups.

The Moscow–Washington hotline was also used during the 1971 Indo-Pakistani War; during the Yom Kippur War (1973 Arab–Israeli War), when there was a United States nuclear alert; in 1974, when Turkey invaded Cyprus; in 1979, when the Soviet Union invaded Afghanistan, and several times during the Reagan Administration, with the Soviets querying about events in Lebanon and the United States commenting on the situation in Poland.[1]

Other hotlines with Moscow

Another hotline for record communications between Washington and Moscow is part of the American NRRC and Russian NNRRC, which was initiated by Ronald Reagan in 1988.[17]

In 2012 it was announced that a proposal was being negotiated with Moscow to add cyber warfare to the topics to be discussed on the hotline.[17] 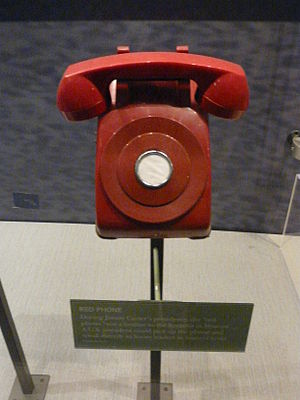 A non-dial "Red Phone" which is on display in the Jimmy Carter Library and Museum. This telephone is actually a prop, erroneously representing the hotline between Washington and Moscow.[18]

In numerous television series, movies, video games and other places, the hotline between Washington and Moscow is represented by a red phone, although the real hotline never was a telephone line.

A hotline telephone was depicted in the film Fail-Safe as the "Red 1 / Ultimate 1 Touch phone", and also in Stanley Kubrick's film Dr. Strangelove, both from 1964 and both loosely based on Peter George's Cold War thriller novel Red Alert from 1958.

More realistic was Tom Clancy's novel The Sum of All Fears from 1991 and its 2002 film adaptation, in which a text-based computer communications system was depicted, resembling the actual Hotline equipment from the 1980s and 1990s.

In the 1990 HBO film By Dawn's Early Light, the White House Situation Room equipment that receives the (translated) hotline message, apparently relayed by the Pentagon-NMCC MOLINK team, is depicted as a teleprinter[19] (and not as a fax machine, the technology already in use at the NMCC itself by that year[3]).

In the real-time strategy game Command & Conquer: Red Alert 2 by Westwood Studios the "red phone" is shown in the opening sequence to the game where the US President is seen calling Premier Alexander Romanov (the Russian President) to call off an apparent invasion by the Soviet Military on the United States. The sequence shows Yuri using his mind control technology over a secured phone line to NORAD, causing US military personnel to turn on each other and thus preventing a nuclear counter-attack on the Soviets.

In the Call of Duty: Black Ops series, a number of red telephones can be found within the Pentagon in secured areas, including the National Military Command Center, as well as a hidden meeting room where the President meets the protagonist and later Secretary MacNamara and Fidel Castro.

The "red phone" was the centerpiece of television commercials used in the 1984 Democratic primary and 1984 presidential election and the 2008 Democratic primary elections. In 1984, an advertisement made by Bob Beckel and Roy Spence on behalf of candidate Walter Mondale suggested that, "The most awesome, powerful responsibility in the world lies in the hand that picks up this phone." The advertisement was intended to raise questions about candidate Gary Hart's readiness for the presidency.[20][21]

The red phone was also featured prominently in an advertisement from that year targeting President Ronald Reagan's Strategic Defense Initiative. In the second ad, the ringing phone goes unanswered while the narrator says, "there will be no time to wake a president – computers will take control."[22][23][24] Roy Spence revived the "red phone" idea in 2008 in an advertisement for candidate Hillary Clinton.[25][26]