From Infogalactic: the planetary knowledge core
Jump to: navigation, search
This article is about the battle standard of the King of France. For other uses, see Oriflamme (disambiguation). 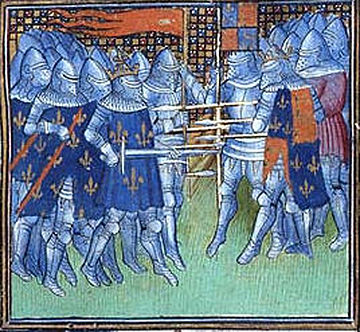 The Battle of Poitiers 1356. The oriflamme can be seen on the top left.

The Oriflamme (from Latin aurea flamma, "golden flame") was the battle standard of the King of France in the Middle Ages. It was originally the sacred banner of the Abbey of St. Denis,[1] a monastery near Paris. When the oriflamme was raised in battle by the French royalty during the Middle Ages, most notably during the Hundred Years War, no prisoners were to be taken until it was lowered. Through this tactic they hoped to strike fear into the hearts of the enemy, especially the nobles, who could usually expect to be taken alive for ransom during such military encounters.[2]

In French, the term "oriflamme" has come to mean any banner with pointed ends; by association with the form of the original.

Reconstructions of two versions of the historical Oriflamme banner. Other descriptions have the banner as plain red.

The Oriflamme was mentioned in the eleventh-century ballad the Chanson de Roland (vv. 3093-5) as a royal banner, first called Romaine and then Montjoie.[3] According to legend, Charlemagne carried it to the Holy Land in response to a prophecy regarding a knight possessing a golden lance, from which flames would burn and drive out the Saracens.[4] This suggests that the lance was originally the important object, with the banner simply a decoration, but this changed over time.[5]

The Oriflamme was first used by Louis VI in 1124 and was last flown in battle at Agincourt in 1415,[6] though a version of it remained in the Abbey of St. Denis until the 18th century.[7]

Louis VI replaced the earlier banner of Saint Martin with the oriflamme of the Abbey of St. Denis, which floated about the tomb of St. Denis and was said to have been given to the abbey by Dagobert[disambiguation needed]. Until the 12th century the standard-bearer was the Comte de Vexin, who, as vowed to St. Denis, was the temporal defender of the abbey. Louis VI, having acquired Vexin, became standard-bearer; as soon as war began, Louis VI received Communion at St. Denis and took the standard from the tomb of the saint to carry it to the combat.

It is recorded as having been carried at the following battles/campaigns:[citation needed]

The Oriflamme was lost at least five times during its medieval history; Mons-en-Pévèle,[8] Crécy [9] Poitiers[10] and Agincourt,[11] and also during the campaigns of the Seventh Crusade under King Louis IX.[12][13]

The banner was red or orange-red silk and flown from a gilded lance.[14] According to legend, its colour stems from it being dipped in the blood of the recently beheaded St. Denis.

The surviving descriptions of the Oriflamme are in Guillaume le Breton (thirteenth century), in the "Chronicle of Flanders" (fourteenth century), in the "Registra Delphinalia" (1456) and in the inventory of the treasury of St. Denis (1536). They show that the primitive Oriflamme was succeeded in the course of the centuries by newer Oriflammes which bore little resemblance to one another except for their colour.[3]

Significance on the battlefield

When the Oriflamme was displayed on the battlefield it indicated that no quarter was to be given, its red colour being symbolic of cruelty and ferocity.[15]

Although the azure ground (from the blue cope of St. Martin of Tours) strewn with gold fleur-de-lis remained the symbol of royalty until the 15th century, the Oriflamme became the royal battle standard of the King of France, and it was carried at the head of the king's forces when they met another army in battle. In the fifteenth century, the fleur-de-lis on the white flag of Joan of Arc became the new royal standard replacing both the symbol of royalty and the Oriflamme on the battle field.[3]

The bearer of the standard, the porte-oriflamme, became an office (like that of Marshal or Constable) and a great honour, as it was an important and very dangerous job to take charge of such a visible symbol in battle. If things went badly, the bearer was expected to die rather than relinquish his charge.

Froissart vividly describes porte-oriflamme Geoffroi de Charny's fall at the side of his king at the Battle of Poitiers in this passage:

“There Sir Geoffroi de Charny fought gallantly near the king (note: and his fourteen-year-old son). The whole press and cry of battle were upon him because he was carrying the king’s sovereign banner [the Oriflamme]. He also had before him his own banner, gules, three escutcheons argent. So many English and Gascons came around him from all sides that they cracked open the king’s battle formation and smashed it; there were so many English and Gascons that at least five of these men at arms attacked one [French] gentleman. Sir Geoffroi de Charny was killed with the banner of France in his hand, as other French banners fell to earth.”[16]

Notable Bearers of the Oriflamme