Paul Howard Poberezny (September 14, 1921 – August 22, 2013) was an American aviator and aircraft designer. He founded the Experimental Aircraft Association (EAA) in 1953, and spent the greater part of his life promoting homebuilt aircraft.

Poberezny is widely considered as the first person to have universalized the tradition of aircraft homebuilding. Through his work with EAA, he had the reputation of inspiring millions of people to get involved in grassroots aviation.[1][2][3]

Poberezny founded the EAA out of his Hales Corners, Wisconsin home in 1953. It started as predominately a homebuilding organization in his basement, but later went on to capture all aspects of general aviation internationally. Poberezny retired as EAA President in 1989, remaining as Chairman of the organization until 2009. As of 2014, the organization had approximately 180,000 members in more than 100 countries.[4]

EAA's annual convention and fly-in, known as EAA AirVenture Oshkosh in Oshkosh, Wisconsin, attracts a total attendance in excess of 500,000 people, 10,000 aircraft and 1,000 different forums & workshops annually, making it the largest of its kind in the world. It was first held in 1953 at what is now Timmerman Field in Milwaukee, and attracted only a handful of airplanes. Towards the late '50s, the event outgrew Timmerman Field and was moved to the Rockford, Illinois Municipal Airport.[5] There, attendance at the fly-in continued to grow until the Rockford airport was too small to accommodate the crowds, and so it was moved to Oshkosh's Wittman Regional Airport in 1970.

Paul's son, aerobatic world champion Tom Poberezny, was the Chairman of the annual Experimental Aircraft Association Fly-In Convention since 1977, and was president of EAA from 1989 to September 7, 2010. In March 2009, Paul Poberezny stepped down as Chairman of EAA and his son took on these duties as well. 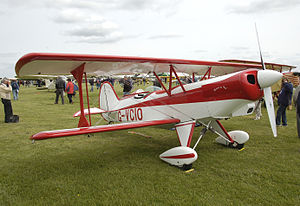 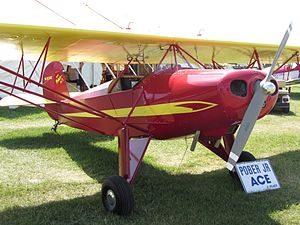 Poberezny flew over 500 aircraft types, including over 170 home-built planes throughout his life.[6][7] He was introduced to aviation in 1936 at the age of 16 with the gift of a donated damaged WACO Primary Glider that he rebuilt and taught himself to fly.[8] A high-school teacher owned the glider and offered to pay Poberezny to repair it. He hauled it to his father's garage, borrowed books on building/repairing airplanes, and completed the restoration soon after. A friend used his car to tow the glider into the air with Poberezny at the controls; it rose to around a hundred feet when he released the tow rope and coasted to a gentle landing in a bed of alfalfa.[9] A year later, Poberezny soloed at age 17 in a 1935 Porterfield and soon co-owned an American Eagle biplane.[10]

In 1955, Poberezny wrote a series of articles for the publication Mechanix Illustrated, where he described how an individual could buy a set of plans and build their own airplane at home. In the magazine were also photos of himself fabricating the Baby Ace, an amateur-built aircraft (and the first to be marketed as a "homebuilt") that he bought the rights to for US$200 a few years prior. The articles became extremely popular and gave the concept of homebuilding worldwide acclaim.[2][3]

He designed, modified and built several home-built aircraft, and had more than 30,000 hours of flight time in his career. Aircraft that he designed and built include:

In 1996 Poberezny teamed with his daughter Bonnie, her husband Chuck Parnall, and Bill Blake to write Poberezny: The Story Begins, a recounting of the early years of Paul and Audrey, including the founding of EAA.[11]

In 1971 Poberezny was the first recipient of the Duane and Judy Cole award to individuals that promote sport aviation.[14] In 1986 Poberezny was inducted into the Wisconsin Aviation Hall of Fame,[15] In 1987 the National Aeronautic Association awarded Poberezny the Elder Statesman of Aviation, and in 1999 he was inducted into the National Aviation Hall of Fame in Dayton, Ohio.[16] He received the National Business Aviation Association's 2001 Award for Meritorious Service to Aviation, and the 2002 Wright Memorial Award Trophy. In 2008 the Wisconsin Historical Society named him as a "Wisconsin History Maker," recognizing his unique contributions to the state's history.[17] Flying Magazine ranked Poberezny at number 4 on their 2013 list of The 51 Heroes of Aviation, putting him ahead of figures like Bob Hoover, Amelia Earhart, Jimmy Doolittle, and even Chuck Yeager.[3] At the time of its release, just three days before his death, Poberezny was the highest-ranked living person on the list.

Many prominent aviation figures have praised Poporezny's legacy as being crucial to the maturation of the general aviation industry. Radio newscaster and pilot Paul Harvey said that Poberezny "militantly manned the ramparts against those who would fence off the sky", and airshow pilot Julie Clark noted Poporezny as inspiring her and "countless thousands of others to get involved in the promotion of aviation."[18] The brothers behind the founding of Cirrus Aircraft have also credited Poborezny and the EAA as essential to their success:

"The EAA has [been] the driving force for preserving and fostering the enthusiasm of aviation. Without the enthusiasm and passion for this industry, we would not have seen the great development of GA through the 60s and 70s and, I believe, GA may not have even survived the late 80s and 90s. Paul created an organization that allowed, fostered and promoted creativity and perseverance for aviation. EAA allowed [Alan and me] to dream of something different, and then showed us a path forward for that dream."