For the Samaritans, Ancient Hebrew as a spoken everyday language became extinct and was succeeded by Aramaic (see Samaritan Aramaic language), which itself ceased to be a spoken language some time between the 10th and the 12th centuries and succeeded by Arabic (or more specifically Samaritan Palestinian Arabic). 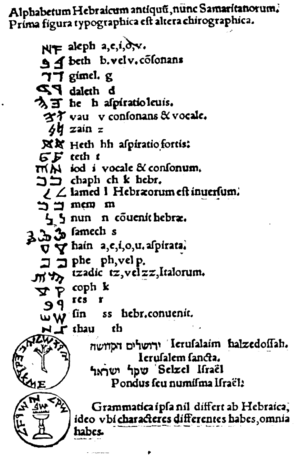 In 1538 Guillaume Postel published the Samaritan alphabet, together with the first Western representation of a Hasmonean coin[4] 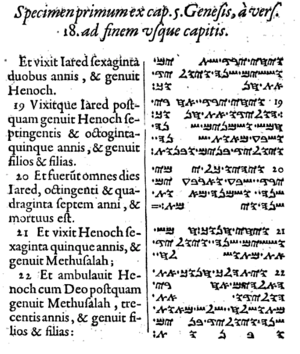 Genesis 5:18-22 as published by Jean Morin in 1631 in the first publication of the Samaritan Pentateuch

The Samaritan language first became known in detail to the Western world with the publication of a manuscript of the Samaritan Pentateuch in 1631 by Jean Morin.[5] In 1616 the traveler Pietro della Valle had purchased a copy of the text in Damascus, and this manuscript, now known as Codex B, was deposited in a Parisian library.[6] Between 1815 and 1835, Wilhelm Gesenius wrote his treatises on the original of the Samaritan version, proving that it postdated the Masoretic text.[7]

Between 1957 and 1977 Ze'ev Ben-Haim published in five volumes his monumental Hebrew work on the Hebrew and Aramaic traditions of the Samaritans. Ben-Haim, whose views prevail today, proved that modern Samaritan Hebrew is not very different from Second Temple Samaritan, which itself was a language shared with the other residents of the region before it was supplanted by Aramaic.[8] 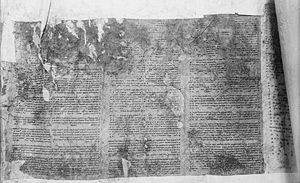 Samaritan Hebrew is written in the Samaritan alphabet, a direct descendant of the Paleo-Hebrew alphabet, which in turn is a variant of the earlier Phoenician alphabet.

The Samaritan alphabet is close to the script that appears on many Ancient Hebrew coins and inscriptions of Ancient Israel.[9] By contrast, all other varieties of Hebrew, as written by Jews, employ the later 'square' Hebrew alphabet, which is in fact a variation of the Aramaic alphabet (more specifically, a form of the Assyrian script) that Jews began using in the Babylonian exile following the exile of the Kingdom of Judah in the 6th century BCE. During the 3rd century BCE, Jews began to use this stylized "square" form of the Aramaic alphabet that was used by the Persian Empire, which in turn was adopted from the Assyrians,[10] while the Samaritans continued to use the paleo-Hebrew script, which evolved into the Samaritan script.

Samaritan Hebrew shows the following consonantal differences from Biblical Hebrew: The original phonemes */b g d k p t/ do not have spirantized allophones, though at least some did originally in Samaritan Hebrew (evidenced in the preposition "in" ב- /af/ or /b/). */p/ has shifted to /f/ (except occasionally */pː/ > /bː/). */w/ has shifted to /b/ everywhere except in the conjunction ו- 'and' where it is pronounced as /w/. */ɬ/ has merged with /ʃ/, unlike in all other contemporary Hebrew traditions in which it is pronounced /s/. The laryngeals /ʔ ħ h ʕ/ have become /ʔ/ or null everywhere, except before /a ɒ/ where */ħ ʕ/ sometimes become /ʕ/. /q/ is sometimes pronounced as [ʔ], though not in Pentateuch reading, as a result of influence from Samaritan Arabic.[12] /q/ may also be pronounced as [χ], but this occurs only rarely and in fluent reading.[12]

Stress generally differs from other traditions, being found usually on the penultimate and sometimes on the ultimate.

That: alaz (written with a he at the beginning).

The definite article is a- or e-, and causes gemination of the following consonant, unless it is a guttural; it is written with a he, but as usual, the h is silent. Thus, for example: énnar / ánnar = "the youth"; ellêm = "the meat"; a'émur = "the donkey".