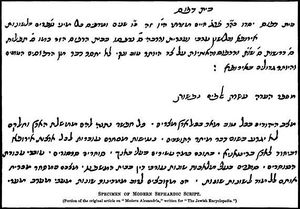 Solitreo is a cursive form of the Hebrew alphabet. Traditionally a Sephardi script, it is the predecessor of the Ashkenazi cursive currently used for handwriting in modern Israel. The two forms differ from each other primarily in that Solitreo uses far more ligatures than the Ashkenazi script, creating a more flowing style resembling Arabic.

Historically, Solitreo was used in two parallel ways. In the Ladino language of the Balkans and Turkey, it served as the standard handwritten form that complemented the Rashi script character set used for printing. In Mizrahi communities in the Maghreb and Levant, it was used for manuscript documents in Hebrew and Judeo-Arabic. While both the Balkan and Mizrahi forms are called "Solitreo," they are quite distinctive, and readers familiar with one type may find the other difficult to read. [1]

With the decline of Ladino and the dispersion of Mizrahi population centers, examples of Solitreo have become scarce. The February 2012 digitization of a Jewish merchant's memoir from late 19th century Salonica, Ottoman Empire (modern Thessaloniki, Greece) by scholars from Stanford University provided a new, high-quality resource for scholars of Ladino and Solitreo.[2]