Edward Rivers J. "Ted" Ray (28 March 1877 – 26 August 1943) was a British professional golfer. He won two major championships, The Open Championship in 1912 and the U.S. Open in 1920, and contended in many others during the early years of the 20th century. Ray was also a maker of fine golf clubs and was an excellent billiards player.

Born on the Isle of Jersey in the English Channel, Ray grew up idolising fellow islander Harry Vardon, who was seven years older than Ray. Vardon became the world's top golfer in the early 1890s, while Ray was working as a caddy and developing his own golf skills at the same Jersey course where Vardon learned the game. Ray was a tall, heftily-built man who was known worldwide for his prodigious power off the tee and through the set,[1] though his shots often landed in awful positions. In addition to his prowess on the golf course, he was also a fine billiards player.[2]

Ray turned professional in his late teens, and took a position as a club professional at Churston Golf Club, Churston, Devon. He gradually developed his skill and reputation by participation in minor tournaments. During his time at Churston, he was encouraged by the club's committee to enter The Open Championships from 1900 to 1902, and was granted a week's leave of absence and five pounds for expenses each year. After leaving Churston, in 1903, he became the head professional at Ganton Golf Club, replacing the legendary Harry Vardon who had left to join the South Herts Golf Club. Later, he would take up the position of golf professional at Oxhey Golf Club near Watford in Hertfordshire from 1912 to 1941, when he retired due to illness. He was also a fine clubmaker and advertised his business while the professional at Oxhey. He specialized in the production of drivers, mashies, and niblicks.

He favoured an attacking style, and had to develop phenomenal recovery skills. Cartoonists usually depicted him with a niblick in hand, festooned with clumps of heather and saplings, with an inseparable pipe clamped between his teeth. Ray was beloved by fans for his daring play, friendly, genial manner and optimistic spirit.

Ray was best known for participating in a playoff for the U.S. Open in 1913 with Vardon and Francis Ouimet, the winner. Ray's opening round of 79 was not particularly useful but he rebounded by carding a course record 70 in round two which electrified the gallery and got him back into contention.[1] He narrowly missed a 5-foot putt at the last that would have given him a 69.[1] His four cards for the tournament were 79-70-76-79=304.[3]

The 1913 U.S. Open was the subject of a 2005 Disney movie entitled, The Greatest Game Ever Played, based on author Mark Frost's 2002 book of the same name. Ray had joined Vardon on an extensive tour of North America, promoted and financed by English media baron Lord Northcliffe. The two stars travelled the continent for two months, partnering in exhibition matches against the top players in each area they visited. The tour was very successful, attracting large crowds who came out to watch the top British players challenge emerging local golf talent at a time when golf was entering a boom period of popularity, which was further stimulated by the tour. Vardon and Ray ended their tour at the 1913 U.S. Open.[4]

Ray was player/captain for Great Britain during the "unofficial source event" for Ryder Cup competition at the East Course, Wentworth Club, Virginia Water, Surrey, Great Britain in 1926. He was again player/captain the next year, the first official Ryder Cup. Ray played in The Open Championship as late as age 60 in 1937. 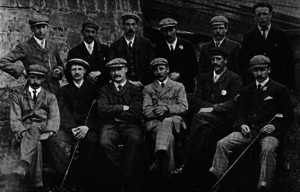 A group photo of the 1903 English golf team prior to their international match against Scotland. Ray is seated front row, second from the right. J. H. Taylor and Tom Vardon are in the center of the front row, from left to right, respectively. Albert Tingey, Sr. is seated on the far right, front row. James Sherlock is standing in the back row on the far left.

Ray played in only The Open Championship and the U.S. Open.