From Infogalactic: the planetary knowledge core
Jump to: navigation, search
"Star key" redirects here. For the key on a telephone keypad, see asterisk. 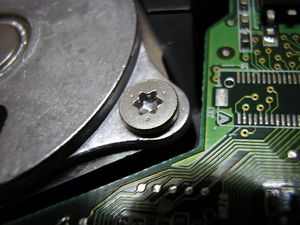 A Torx T8 screw on a hard disk drive. 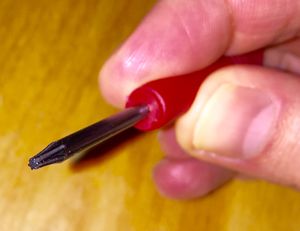 Torx (pronounced /tɔːrks/), developed in 1967[1] by Camcar Textron,[2] is the trademark for a type of screw head characterized by a 6-point star-shaped pattern. A popular generic name for the drive is star, as in star screwdriver or star bits. The official generic name, standardized by the International Organization for Standardization as ISO 10664, is hexalobular internal.[3] This is sometimes abbreviated in databases and catalogs as 6lobe (starting with numeral "6", not a capital "G"). Torx Plus is an improved head profile.

File:Torx-hex-contact-angles-forces.png
The angle between the plane of contact between tool and fastener and the circumferentially directed force is much closer to 90 degrees in a Torx type of head (lower) than in a conventional hex head (upper).

By design, Torx head screws resist cam-out better than Phillips head or slot head screws.[1] Where Phillips heads were designed to cause the driver to cam out[citation needed], to prevent overtightening, Torx heads were designed to prevent cam-out. The development of better torque-limiting automatic screwdrivers for use in factories allowed this change. Rather than rely on the tool to slip out of the screw head when a torque level is reached, which risks damage to the driver tip, screw head, and/or workpiece, torque-limiting driver designs achieve a desired torque consistently. The manufacturer claims that this combination can increase tool bit life by ten times or more.[citation needed]

The Torx design allows for a higher torque to be exerted than a similarly sized conventional hex socket head without damaging the head and/or the tool.[1] The diagram on the right depicts the interaction between the male and female components of a conventional hex drive and a Torx drive. The clearance between the components is exaggerated for clarity. The diagram does not show a true Torx profile, but illustrates the general shape and geometry.

The green circle, passing through the six points of contact between the two components, represents the direction of the rotational force being exerted at each of those points. Because the plane of contact is not perpendicular to this circle, a radial force is also generated which tends to "burst" the female component and "crush" the male one. If this radial force component is too great for the material to withstand, it will cause the corners to be rounded off one or both components or will split the sides of the female part. The magnitude of this force is proportional to the cotangent of the angle (depicted in orange) between the green circle and the contact plane. It can be seen that for the Torx type of design, the angle is much closer to 90 degrees than in the case of the hex head, and so for a given torque the potentially damaging radial force is much lower. This property allows the head of the fastener to be smaller for the same required torque, which can be an advantage in applications where space to accommodate the head is limited.

Torx head sizes are described using the capital letter "T" followed by a number ranging from T1 to T100.[5] A smaller number corresponds to a smaller point-to-point dimension of the screw head (diameter of circle circumscribed on the cross-section of the tip of the screw driver). Common sizes include T10, T15, and T25, while T5.5, T35, and T47 tend to see specialized use. Only the proper driver can drive a specific head size without risk of damaging the driver or screw. The same series of Torx drivers is used to drive SAE, metric and other thread system fasteners, reducing the number of bit sizes required.

The "external" variants of Torx head sizes (see below) are described using the capital letter "E" followed by a number ranging from E4 to E44.[6] The "E" numbers are different from the "T" numbers of the same size: for example, an E4 Torx socket fits a T20 head.[5]

TTAP, which is also hexalobular, is designed to minimize wobbling without the need for magnetic bits, a feature that can be important to certain industrial users. Standard Torx drivers can be used to drive TTAP screws, but TTAP drivers will not fit standard Torx screws.

AW is a similar type of screw head developed by the Würth group in Germany.