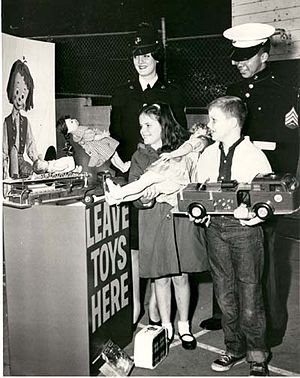 An early promotional photo from the Toys for Tots program
File:InPhonic, Wirefly, Toys for Tots.jpg
InPhonic's CEO and CFO present the results of the company's drive in December 2006 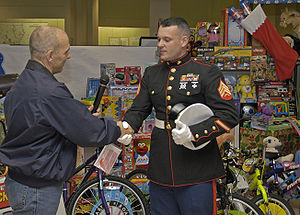 Toys for Tots is a program run by the United States Marine Corps Reserve which distributes toys to children whose parents cannot afford to buy them gifts for Christmas. The program was founded in 1947 by reservist Major Bill Hendricks.[2]

The Marine Toys for Tots Foundation, a 501(c)(3) not-for-profit public charity located in Triangle, Virginia, serves to fund, raise funds for, and support the program.

Toys for Tots began as a Los Angeles charitable effort in 1947. Major Bill Hendricks, USMCR, was inspired by his wife Diane when she tried to donate a homemade Raggedy Ann doll to a needy child but couldn't find any organization to do so. At her suggestion, he gathered a group of local Marine reservists, including Lieutenant Colonel John Hampton,[3] who coordinated and collected some 5,000 toys for local children that year from collection bins placed outside of Warner Bros. movie theaters.[3] Their efforts were so successful that, in 1948, Toys for Tots was launched as a national campaign. Hendricks used his position as director of Public Relations for Warner Brothers Studio to enlist celebrity support, as well as have Walt Disney Studios design the red toy train logo.[2]

Until 1979, Marine reservists (frequently in their dress blue uniforms) and volunteers would collect and refurbish used toys. In 1980, only new toys were accepted, as reservists were no longer able to dedicate drill hours to refurbish toys, as well as legal concerns and the mixed message of giving hand-me-downs as a message of hope.[2]

Noting in 1996 that many communities did not have a Marine reservist presence, the commander of the Marine Forces Reserve authorized Marine Corps League detachments and other local organizations to fill the gaps in toy collection and distribution.[4]

In 2009, the program received support from First Lady Michelle Obama, who placed the first collection box at the White House.[5] In December 2011, she took part in a Toys for Tots activity at Joint Base Anacostia-Bolling.[6][7]

As of 2013, the Toys for Tots Program and Foundation have collected and distributed more than 469 million toys.[8]

The mission of the program "is to collect new, unwrapped toys during October, November and December each year, and distribute those toys as Christmas gifts to needy children in the community in which the campaign is conducted."

The stated goal is to "deliver, through a new toy at Christmas, a message of hope to less fortunate youngsters that will assist them in becoming responsible, productive, patriotic citizens."