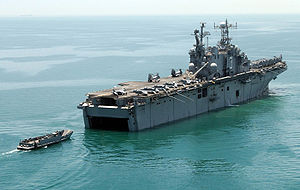 A Marine Expeditionary Unit (MEU, pronounced "Mew"), formerly called Marine Amphibious Unit (MAU), is the smallest Marine air-ground task force (MAGTF) in the United States Fleet Marine Force.[1] Each MEU is an expeditionary quick reaction force, deployed and ready for immediate response to any crisis, whether it be natural disaster or combat missions.[2]

A Marine Expeditionary Unit is normally composed of: a reinforced Marine infantry battalion (designated as a Battalion Landing Team) as the ground combat element, a composite medium tiltrotor squadron forms the aviation combat element, a combat logistics battalion provides the logistics combat element, and a company-size command element serves as the MEU headquarters group. Troop strength is about 2,300 and usually commanded by a colonel, and is deployed from amphibious assault ships. Currently, a Marine expeditionary unit embarks Marines and equipment onto the amphibious warfare ships of an Expeditionary Strike Group (ESG) which also includes escort ships and submarines to protect them from air, surface, and submarine threats. For further protection and strong air support, such an ESG is often deployed along with one or more carrier battle groups. 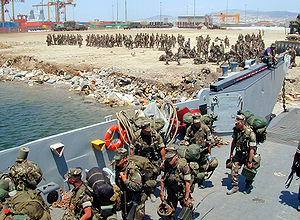 When the United States Army integrates with Air Force assets, it typically is at the theater or corps level, with a general commanding, while at the division level it will integrate with Army aviation, which can be organized as organic at the battalion level.

The MEU's ground combat element also combines artillery, light armor and tanks at a much lower level than was common in the Army until the development of the brigade combat team early in the War on Terror, with a similar concept, the combat command, being utilized in World War II.

This air-ground task force concept is designed to thoroughly exploit the combat power inherent in air and ground assets by closely integrating them into a single force. The MEU brings all the supplies and logistical support it needs to sustain itself for quick mission accomplishment or to pave the way for any follow-up forces. This self-sustainment allows more flexibility in disposition and operations of forces, and allows the MEU to initiate operations sooner and let support catch up later, without having to wait for external logistical support to begin a mission. Deployments on U.S. Navy amphibious assault ships allows MEUs to seabase around the globe, ready for deployment at short notice.

A typical MEU has approximately 2,200 Marines and sailors. It is equipped with: 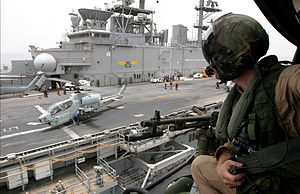 Many types of equipment are, or will soon, undergo a transitory phase as they are replaced. Some examples include the Marine Personnel Carrier replacing the LAV-25, the F-35 Lightning II replacing the AV-8B Harrier, and the CH-53K Super Stallion replacing the CH-53E. 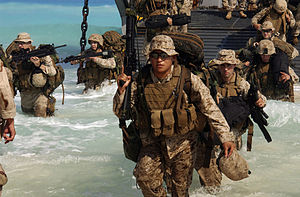 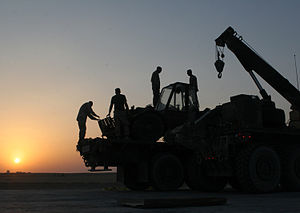 The reconnaissance platoon provides the basic element for the Maritime Special Purpose Force. This force consists of four elements. The assault platoon (a direct action platoon augmented from Force Recon), security (a selected infantry platoon from the battalion landing team), reconnaissance and surveillance assets, and a headquarters section. The total strength is approximately 350 Marines and sailors.

The logistics combat element (LCE) (formerly combat service support element or CSSE) is based on the MEU combat logistics battalion (CLB) (formerly MEU service support group or MSSG). It contains all the logistics specialists and equipment necessary for the MEU to support and sustain itself for up to 15 days in an austere expeditionary environment. It includes service support (postal and disbursing), medical, dental, intermediate maintenance, intermediate supply (consumables and secondary reparables), transportation (distribution and landing support), explosive ordnance disposal, utilities production and distribution, bulk fuels, internal communications, and various other technical experts. It consists of approximately 300 Marines and Sailors.

Recently, MEUs have been deployed within an expeditionary strike group (ESG) in the Mediterranean, the Western Pacific, and periodically, the Atlantic and Indian Oceans. An ESG is typically composed of three amphibious ships that embark the necessary troops and equipment and are escorted by a guided missile cruiser (CG) and guided missile destroyers (DDG) and submarine (SSN) support.

Before the ESG, MEUs were typically deployed as part of an Amphibious ready group

MEUs maintain their subordinate elements in fifteen month cycles: a nine months stateside (with six set aside for training), and a six month deployment aboard ship. These cycles ensure that at least two of the seven MEUs are deployed forward at any given time.

Interim or buildup period: Upon completion of a deployment, the Marine expeditionary unit remains "special operations capable" for approximately one month, prepared to respond to events around the world. They are not, however, considered a special operations unit by the Department of Defense. The MEU then releases its major subordinate elements (MSEs), retaining only its command element. This period provides the command element a chance to rotate select personnel and begin planning for the addition of newly assigned MSEs and “work-up” training. When the MSEs are received, the MEU begins six months of intense pre-deployment training.

Work-up period: Training during the six-month work-up period is often referred to as "crawl, walk, run". The Marines and Sailors progress through curriculum and exercises that teach individual, small unit, and unit tactics while integrating the separate MEU elements into a cohesive, flexible, and powerful force. The work-up period includes training in many combat and noncombat skills, to include:

Exercises conducted during the work-up period can include:

Deployment: Following the work-up period, the MEU deploys for six months in support of geographic combatant commanders. During this time, the MEU is a forward-deployed, self-sustaining force that combatant commanders can direct to accomplish a variety of special operations and conventional missions.

The missions may include:

West Coast MEUs fall under I Marine Expeditionary Force, and their main area of operations includes the western Pacific and Indian oceans (to include the Persian Gulf).[3]

The 31st MEU is the only permanently forward-deployed MEU, maintaining a presence in the Pacific Ocean at all times as part of III Marine Expeditionary Force.[3]