Low Franconian, Low Frankish (sometimes equated with "Istvaeonic"[according to whom?]), is a group of several West Germanic languages spoken in the Netherlands, northern Belgium (Flanders), in the north department of France, in western Germany (Lower Rhine), as well as in Suriname, South Africa and Namibia that originally descended from Old Frankish.

The Frankish language, also "Old Frankish", was the language of the Franks. It is a West Germanic language and was spoken in Merovingian times, preceding the 7th century. Austrasia formed the northeastern portion of the Kingdom of the Merovingian Franks (Francia), comprising parts of the territory of present-day western Germany, eastern and northern France, Luxembourg, Belgium, and the Netherlands. The Franks first established themselves in the Netherlands and Flanders before they started to fight their way down south and east. The language had a significant impact on Old French. It evolved into Old Dutch in the north and it was replaced step by step by the langues d'oïl in the south.

Old Frankish is not directly attested except in glosses and small phrases. It has been reconstructed using the comparative method from loanwords in Old French and from Old Dutch. One known phrase in Old Frankish is found in the Salic law of the early sixth century, and is used to free a serf:

Maltho thi afrio lito.
I say to you, I free you, half-free.

Old Low Franconian (also Old Low Frankish) was a group of dialects spoken in the Low countries. It was a daughter language of the Old Frankish language. 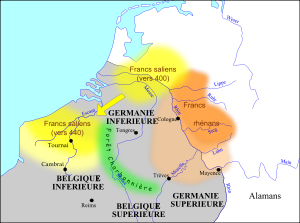 Regardless of this difference in interpretation, East Low Franconian was eventually "absorbed" into Dutch as it became the dominant form of Low Franconian, although it remains a noticeable substrate within the Limburgish language.[2]

Dutch, like other Germanic languages, is conventionally divided into three phases. In the development of Dutch these phases were:

Low-Franconian varieties are also spoken in the German area along the Rhine between Cologne and the border between Germany and the Netherlands. During the 19th and 20th centuries these dialects have partly and gradually been replaced by today's Standard German. Sometimes, Low Franconian is grouped together with Low German. However, since this grouping is not based on common linguistic innovations, but rather on the absence of the High German consonant shift and Anglo-Frisian features, modern linguistic reference books do not group them together.[3] 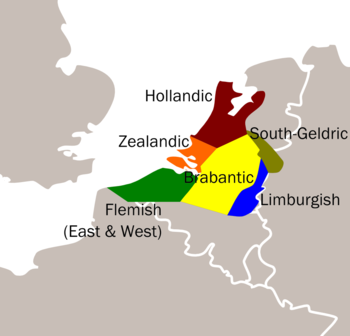 The contemporary continental Low Franconian language area is decreasing in size. French Flanders has become more and more francophone during the last century. Brussels Capital Region is officially bilingual, but largely francophone. In Germany, Low Franconian only exists as Meuse-Rhenish regiolects and dialects.

The main dialects are:

It is common to consider the Limburgish varieties as belonging to the Low Franconian languages; in the past, however, all these Limburgish dialects were sometimes seen as West Central German, part of High German. This difference is caused by a difference in definition: the latter stance defines a High German variety as one that has taken part in any of the first three phases of the High German consonant shift. Limburgish is also spoken in a considerable part of the German Lower Rhine area, in what could be called German-administered Limburg: from the border regions of Kleve, Aachen, Viersen, Heinsberg stretching out to the Rhine river. At the Rhine near Duisburg, it adjoins a smaller strip of other Low Franconian varieties called Bergisch. Together these distinct varieties, now often combined with the Kleve dialects (Kleverländisch) as Meuse-Rhenish ('Rheinmaasländisch'), belong to the greater Low Franconian area between the rivers Meuse and Rhine (A. Welschen 2002). Limburgish straddles the borderline between 'Low Franconian' and 'Middle Franconian' varieties. They are more-or-less mutually intelligible with the Ripuarian dialects, but show fewer 'High German shifts' (R. Hahn 2001). In a number of towns and villages in the north-east of the Belgian province of Liege, such as Hombourg, Welkenraedt, and Eupen, a transitional Limburgish-Ripuarian dialect is spoken, called Low Dietsch (Dutch: Platdiets, Limburgish: Platduutsj, French: Thiois or Platdutch).

Afrikaans is an Indo-European language, derived from Dutch and classified as Low Franconian Germanic, mainly spoken in South Africa and Namibia, with smaller numbers of speakers in Botswana, Angola, Swaziland, Zimbabwe, Togo, and Zambia. Afrikaans originated from the Dutch language. The dialect became known as "Cape Dutch". Later, Afrikaans was sometimes also referred to as "African Dutch" or "Kitchen Dutch", although these terms were mainly pejorative. Afrikaans was considered a Dutch dialect until the late 19th century, when it began to be recognised as a distinct language, and it gained equal status with Dutch and English as an official language in South Africa in 1925. Dutch remained an official language until the new 1961 constitution finally stipulated the two official languages in South Africa to be Afrikaans and English (although, curiously, the 1961 constitution still had a sub-clause stipulating that the word "Afrikaans" was also meant to be referring to the Dutch language). It is the only Indo-European language of significance that underwent distinct development on the African continent.

The South African Constitution of post 1994 considers Afrikaans as one of 11 official languages. However, Afrikaans does not enjoy equal status with English in business and in government. The majority of Afrikaans speakers in South Africa are of mixed European/Black African/Khoisan/Indonesian descent.