From Infogalactic: the planetary knowledge core
Jump to: navigation, search
This article is about the mostly spoken Swiss language, a family of local dialects. For the official language, see Swiss Standard German.

Swiss German (German: Schweizerdeutsch, Alemannic German: Schwyzerdütsch, Schwiizertüütsch, Schwizertitsch[note 1]) refers to any of the Alemannic dialects spoken in Switzerland and in some Alpine communities in Northern Italy. Occasionally, the Alemannic dialects spoken in other countries are grouped together with Swiss German, as well, especially the dialects of Liechtenstein and Austrian Vorarlberg, which are closely associated to Switzerland's.[citation needed]

Linguistically, Swiss German forms no unity. The linguistic division of Alemannic is rather into Low, High and Highest Alemannic, varieties of all of which are spoken both inside and outside of Switzerland. The reason "Swiss German" dialects constitute a special group is their almost unrestricted use as a spoken language in practically all situations of daily life, whereas the use of the Alemannic dialects in the other countries is restricted or even endangered.[citation needed]

Unlike most regional languages in modern Europe, Swiss German is the spoken everyday language of all social levels in industrial cities, as well as in the countryside. Using the dialect conveys neither social nor educational inferiority and is done with pride.[5] There are a few settings where speaking Standard German is demanded or polite, e.g., in education (but not during breaks in school lessons, where the teachers will speak in the dialect with students), in multilingual parliaments (the federal parliaments and a few cantonal and municipal ones), in the main news broadcast or in the presence of non-Alemannic speakers. This situation has been called a "medial diglossia", since the spoken language is mainly the dialect, whereas the written language is mainly (the Swiss variety of) Standard German.

Dialect rock is a music genre using the language; many Swiss rock bands, however, alternatively rather sing in English.

The Swiss Amish of Indiana also use Swiss German.

Swiss German is a regional or political umbrella term, not a linguistic unity. For all dialects, there are idioms spoken outside Switzerland that are more closely related to them than some Swiss German dialects. The main linguistic divisions within Swiss German are those of Low, High and Highest Alemannic, and mutual intelligibility across those groups is almost fully seamless, though with some minor exceptions, mainly regarding vocabulary. Low Alemannic is only spoken in the northernmost parts of Switzerland, in Basel and around Lake Constance. High Alemannic is spoken in most of the Swiss Plateau, and is divided in an eastern and a western group. Highest Alemannic is spoken in the Alps. 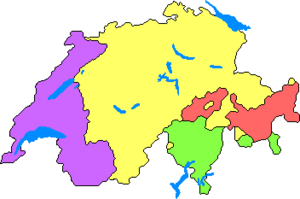 Each dialect is separable into numerous local subdialects, sometimes down to a resolution of individual villages. Speaking the dialect is an important part of regional, cantonal and national identities. In the more urban areas of the Swiss plateau, regional differences are fading due to increasing mobility, and a growing population of non-Alemannic descent. Despite the varied dialects, the Swiss can still understand one another, but may particularly have trouble understanding Walliser dialects.

Most Swiss German dialects, being High German dialects, have completed the High German consonant shift (synonyms: Second Germanic consonant shift, or High German sound shift[6][7]), that is, they have not only changed t to [t͡s] or [s] and p to [p͡f] or [f], but also k to [k͡x] or [x]. But, for example, most Swiss dialects have initial [x] or [k͡x] instead of k; there are, however, exceptions, namely the idioms of Chur and Basel. Basel German is a Low Alemannic dialect (mostly spoken in Germany near the Swiss border), and Chur German is basically High Alemannic without initial [x] or [k͡x].

The High German consonant shift happened between the fourth and 9th centuries south of the Benrath line, separating High German from Low German, where high refers to the geographically higher regions of the German-speaking area of those days (combining Upper German and Central German varieties - also referring to their geographical locations). North of the Benrath line up to the North Sea, this consonant shift did not happen.

The Walser migration, going on between the 12th and 13th centuries, spread upper Wallis varieties towards the east and south, into Grisons and even further to western Austria and northern Italy. Informally, a distinction is made between the German-speaking people living in the canton of Valais, the Walliser, and the migrated ones, the Walsers (to be found mainly in Graubünden, Vorarlberg in Western Austria, Ticino in South Switzerland, south of the Monte Rosa mountain chain in Italy (e.g. in Issime in the Aosta valley), Tirol in North Italy, and Allgäu in Bavaria).

Generally, the Walser communities were situated on higher alpine regions, so were able to stay independent of the reigning forces of those days, who did not or were not able to follow and monitor them all the time necessary at these hostile and hard to survive areas. So, the Walser were pioneers of the liberalisation from serfdom and feudalism. And, Walser villages are easily distinguishable from Grisonian ones, since Walser houses are made of wood instead of stone.

Swiss German keeps the fortis–lenis opposition at the end of words. There can be minimal pairs such as graad [ɡ̊raːd̥] 'straight' and Graat [ɡ̊raːt] 'arête' or bis [b̥ɪz̥] 'be (imp.)' and Biss [b̥ɪs] 'bite'. This distinguishes Swiss German and Swiss Standard German from German Standard German, which neutralizes the fortis–lenis opposition at the ends of words, a phenomenon usually called final-obstruent devoicing, even though, in the case of German, phonetic voice need not be involved.

In the dialects of Basel and Chur, aspirated /k/ is also present in native words.

Unlike Standard German, Swiss German /x/ does not have the allophone [ç], but is always [x], or in many dialects even [χ]. The typical Swiss shibboleth features this sound: Chuchichäschtli ('kitchen cupboard'), pronounced [ˈχuχːiˌχæʃtli].

Most Swiss German dialects have gone through the Alemannic n-apocope, which has led to the loss of final -n in words such as Garte 'garden' (standard German Garten) or mache 'to make' (standard German machen). In some Highest Alemannic dialects, the n-apocope has also been effective in consonant clusters, for instance in Hore 'horn' (High Alemannic Horn) or däiche 'to think' (High Alemannic dänke). Only the Highest Alemannic dialects of the Lötschental and of the Haslital have preserved the -n.

The phoneme /r/ is pronounced as an alveolar trill [r] in many dialects, though certain dialects, especially in the Northeast or in the Basel region, have a uvular trill [ʀ] like the one heard in many German varieties of Germany.

Monophthongs of the Zürich dialect, from Fleischer & Schmid (2006:256)

In many Swiss German dialects, consonant length and vowel length are independent from each other, whereas they are dependent in other Germanic languages. Examples from Bernese German:

Stress is more often on the first syllable than in standard German, even in French loans such as [ˈmɛrsːi] or [ˈmersːi] "thanks". Note that there are many different stress patterns even within dialects. Bernese German is one of the dialects where many words are stressed on the first syllable, e.g. [ˈkaz̥ino] 'casino', whereas standard German has [kʰaˈziːno]. However, no Swiss German dialect is as consistent as the Icelandic language in this respect.

The grammar of Swiss dialects has some specialties compared to Standard German:

This is probably a generalization of a close association of these verbs with the following verb in perfect or modal verb constructions:

The vocabulary is rather rich, especially in rural areas: many specialised terms have been retained, e.g., regarding cattle or weather. In the cities, much of the rural vocabulary has been lost.

Most word adoptions come from Standard German. Many of these are now so common that they have totally replaced the original Swiss German words, e.g. the words Hügel 'hill' (instead of Egg, Bühl), Lippe 'lip' (instead of Lefzge). Others have replaced the original words only in parts of Switzerland, e.g., Butter 'butter' (originally called Anken in most of Switzerland). Virtually any Swiss Standard German word can be borrowed into Swiss German, always adapted to Swiss German phonology. However, certain Standard German words are never used in Swiss German, for instance Frühstück 'breakfast', niedlich 'cute' or zu hause 'at home'; instead, the native words Zmorge, härzig and dehei are used.

Swiss dialects have quite a few words from French and Italian, which are perfectly assimilated. Glace (ice cream) for example is pronounced /ɡlas/ in French but [ˈɡ̊lasːeː] or [ˈɡ̊lasːə] in many Swiss German dialects. The French word for 'thank you', merci, is also used as in merci vilmal, literally "thanks many times". Possibly, these words are not direct adoptions from French but survivors of the once more numerous French loanwords in Standard German, many of which have fallen out of use in Germany.

In recent years, Swiss dialects have also taken some English words which already sound very Swiss, e.g., [ˈfuːd̥ə] ('to eat', from "food"), [ɡ̊ei̯mə] ('to play computer games', from "game") or [ˈz̥nœːb̥ə] or [ˈb̥oːrd̥ə] – ('to snowboard', from "snowboard"). These words are probably not direct loanwords from English, but have been adopted through standard German intermediation. While most of those loanwords are of recent origin, some have been in use for decades, e.g. [ˈ(t)ʃutːə] (to play football, from "shoot").

There are also a few English words which are modern adoptions from Swiss German. The dishes müesli, and rösti have become English words, as did loess (fine grain), flysch (sandstone formation), kepi, landamman, kilch[disambiguation needed], schiffli, and putsch in a political sense. The term bivouac is sometimes explained as originating from Swiss German,[12] while printed etymological dictionaries (e.g. the German Kluge or Knaurs Etymological Dictionary) derive it from Low German instead.

Written forms that were mostly based on the local Alemannic varieties, thus similar to Middle High German, were only gradually replaced by the forms of New High German. This replacement took from the 15th to 18th centuries to complete. In the 16th century, the Alemannic forms of writing were considered the original, truly Swiss forms, whereas the New High German forms were perceived as foreign innovations. The innovations were brought about by the printing press and were also associated with Lutheranism. An example of the language shift is the Froschauer Bible: Its first impressions after 1524 were largely written in an Alemannic language, but since 1527, the New High German forms were gradually adopted. The Alemannic forms were longest preserved in the chancelleries, with the chancellery of Bern being the last to adopt New High German in the second half of the 18th century.[13]

There are no official rules of Swiss German orthography. The orthographies used in the Swiss German literature can be roughly divided into two systems: Those that try to stay as close to standard German spelling as possible and those that try to represent the sounds as well as possible. The so-called Schwyzertütschi Dialäktschrift was developed by Eugen Dieth, but knowledge of these guidelines is limited mostly to language experts. Furthermore, the spellings originally proposed by Dieth included some special signs not found on a normal keyboard, such as ⟨ʃ⟩ instead of ⟨sch⟩ for [ʃ] or ⟨ǜ⟩ instead of ⟨ü⟩ for [ʏ]. In 1986, a revised version of the Dieth-Schreibung was published, designed to be written "on a normal typewriter".[14]

A few letters are used differently from the Standard German rules:

Since the 19th century, a considerable body of Swiss German literature has accumulated. The earliest works were in Zurich German (Johann Martin Usteri, Jakob Stutz); the works of Jeremias Gotthelf which were published at the same time are in Swiss Standard German, but use many expressions of Bernese German. Some of the more important dialect writing authors and their works are:

Parts of the Bible were translated in different Swiss German dialects, e.g.:[16]

A Select Bibliography of English Texts on Swiss German offers the homepage of Schweizerisches Idiotikon.