Americo-Liberians are a Liberian ethnicity of African-American descent. The sister ethnic group of Americo-Liberians are the Sierra Leone Creole people, who are of African-American, West Indian, and liberated African descent.[1] Americo-Liberians trace their ancestry to free-born and formerly enslaved African Americans who immigrated in the 19th century to become the founders of the state of Liberia. They identified there as Americo Liberians. (Some African Americans, following resettlement in Canada, also participated as founding settlers in Sierra Leone and present-day Cote d'Ivoire.[1])

Later in Liberia, these African Americans integrated 5,000 liberated Africans called Congos (former slaves from the Congo Basins, who were freed by British and Americans from slave ships after the prohibition of the African slave trade) and 500 Barbadian immigrants into the hegemony.[2] Unlike the Sierra Leone Creoles, Americo-Liberians rarely intermarried with indigenous West Africans.

The colonists and their descendants led the political, social, cultural and economic sectors of the country; they ruled the new nation for over 130 years as a dominant minority. From 1878 to 1980, the Republic of Liberia was a one-party state ruled by the Americo-Liberian-dominated True Whig Party and Masonic Order of Liberia.[3] 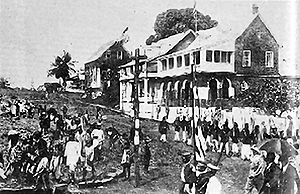 Monrovia in the 19th century

"The love of liberty brought us here", was the motto of some 13,000 persons who crossed the Atlantic to create new settlements on the Grain Coast of West Africa between 1817 and 1867 with the aid of the American Colonization Society. The early settlers practiced their Christian faith, sometimes in combination with traditional African religious beliefs. They spoke an African American Vernacular English, and few ventured into the interior or mingled with local African peoples. They developed an Americo-Liberian society, culture and political organization that was strongly influenced by their roots in the United States, particularly the country's Southeast. Today, the Americo-Liberian population numbers about 150,000. Americo-Liberians were credited for Liberia's largest and longest economic expansion, especially William V. S. Tubman, who did much to promote foreign investment and to bridge the economic, social, and political gaps between the descendants of the original settlers and the inhabitants of the interior.[3] Most of the powerful old Americo-Liberian families fled to the United States in the 1980s after President William Tolbert was assassinated in a military coup.

Making up about 5% of the Liberian population, Americo-Liberians dominated national politics from the founding of the colony until Samuel Doe led a military coup in 1980. There is debate about how Americo-Liberians held on to power for so long. Some attribute it to the fact that divisions were based on "light-skin vs. dark skin", particularly because the first president was of mixed race, as were numerous immigrants, reflecting the nature of African-American society in the Upper South. Scholars have noted, however, that during the Americo-Liberian reign, the leaders had an array of skin colors and African-European admixture, meaning that theory is unlikely. It is more likely they built their power on their connections to the ACS, familiarity with American culture and economics, and ability to create a network of shared interests. Others believe their long reign was in part due to the Masonic Order of Liberia, a fraternal organization, as opposed to colorism. A marble Masonic Lodge was built in 1867 as one of Monrovia's most impressive buildings. It was considered a bastion of Americo-Liberian power, and was strong enough to survive the civil war. After years of neglect after the war the Masonic order has repaired the lodge.[4]

In 1980, a violent military coup was led by Samuel Doe. Doe's tenure as leader of Liberia led to a period of civil wars, resulting in destruction of the country's economy. In the early 21st century, Liberia has been reduced to the third-most impoverished nation in the world; about 85% of the population lives below the international poverty line.[citation needed]

While globalization has carried African-American culture around the world, Americo-Liberians reproduced their own cultural American continuity in Liberia. Its name means "land of the free", and it is considered the most American of African countries in terms of its political institutions.[5][citation needed] The Liberian constitution, structure of government, and flag resemble those of the United States. The former residences of Americo-Liberian families were built in the styled of antebellum plantation homes they may have admired in the American South.[4] Their language continued to carry elements of African American Vernacular English.[citation needed] By many accounts, Liberians easily integrate into African-American communities. Liberian immigrants to the United States have the highest passport acceptance rates and the longest extension rates of any citizens of African nations.[citation needed]

Although many of the Americo-Liberian class left or were killed during the civil wars, and their houses and monuments crumbling, ordinary Liberians look to the United States for aid. African-American leaders consider theirs to be a special relationship, due to the countries' histories. In 2007 BET founder Robert Johnson called for "African Americans to support Liberia like Jewish Americans support Israel."[6] Liberia counts the United States as its strongest supporter in its democratization and reconstruction efforts. In 2007 Condoleezza Rice as Secretary of State announced the U.S. State Department would cancel all of Liberia's debt.[7] Since the end of Liberia's civil war in 2003, the United States has contributed over $750 million toward Liberia's reconstruction and development and more than $750 million to support the United Nations Mission in Liberia (UNMIL). The United States plans to commit another $342 million bilaterally and through UNMIL in fiscal year 2008.[8] Ellen Johnson Sirleaf is the first female President on the African continent. Johnson-Sirleaf was born and raised in the capital of Monrovia, but was educated at Harvard university and lived and worked in the United States for several years after fleeing the civil war, but then came back to Liberia when democracy was restored. She was named after a former Americo-Liberian President (Hilary Richard Wright Johnson). In an interview, she said that one grandfather was of German descent but has said her other grandparents were all of indigenous ancestry.[9]

All subsequent presidents were Liberian-born, though only one, Samuel Doe, is considered to be of exclusive indigenous heritage. [10]