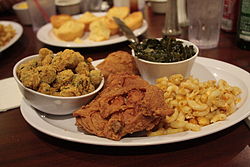 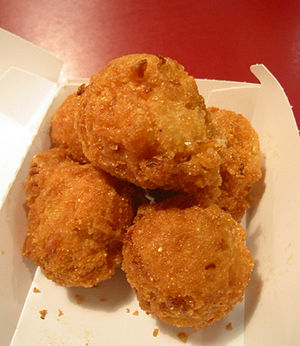 The term soul food became popular in the 1960s after Alex Haley recorded Malcolm X’s life story in 1963. To Malcolm X, soul food represents both southernness and commensality. Those who had participated in the Great Migration found within soul food a reminder of the home and family they had left behind after moving to the unfamiliar northern cities. Soul food restaurants were black-owned businesses that served as neighborhood meeting places where people socialized and ate together.[1] In addition, today's African American and soul foodways can be traced back to influences from Moorish and Arawak communities. Ingredients such as parsley, mint, cumin, turmeric, and cloves were used in the Moorish diet. The Arawak way of barbecuing pork developed after the Spanish introduced domestic pigs to the Caribbean region.[2]

The origins of soul food, however, are much older and can be traced back to Africa. Foods such as rice, sorghum (known by some Europeans as "guinea corn"), and okra — all common elements of West African cuisine — were introduced to the Americas as a result of the trans-Atlantic slave trade. They became dietary staples among enslaved Africans. They also comprise an important part of the cuisine of the American south in general. Foods such as corn and cassava from the Americas, turnips from Morocco, and cabbage from Portugal would play an important part in the history of African-American cooking.[3]

When the Europeans began their African slave trade in the early 15th century, the diet of newly enslaved Africans changed on the long journeys away from their homelands. It was during this time that some of the indigenous crops of Africa began to spread to the Americas.[4] Vegetables, fruits, spices, and herbs were foreign to the typical pre-colonial European diet. Colonialism resulted in the addition of these absent produce items in European Western cuisine, which heavily relied on grains.[5]

Slave owners fed their captive workers as cheaply as possible, often with leftover/waste foods from the plantation, forcing slaves to make do with the ingredients at hand. In slave households, "vegetables" consisted of the tops of turnips, beets, and dandelions. Soon, African-American slaves were cooking with new types of "greens": collards, kale, cress, mustard, and pokeweed. They also developed recipes which used lard, cornmeal, and offal; discarded cuts of meat such as pigs' feet, oxtail, ham hocks, pig ears, pork jowls, tripe, and skin. Cooks added onions, garlic, thyme, and bay leaf as flavor enhancers. Slave owners provided their slaves with the poor parts of the pig such as the small intestines: chitterlings or offal. Sheep intestines had been a common dish in Africa for thousands of years before the Atlantic slave trade; since African-Americans did not have access to sheep intestines, chitterlings came to fill that culinary void. Some African-American slaves supplemented their meager diets by gardening small plots given to them for growing their own vegetables; many engaged in subsistence fishing and hunting, which yielded wild game for the table. Foods such as raccoon, squirrel, opossum, turtle, and rabbit were, until the 1950s, very common fare among the then still predominantly rural and Southern African-American population.[6]

Southern Native American culture (Cherokee, Chickasaw, Choctaw, Creek, Seminole) is the cornerstone of the south's cuisine. From their cultures came one of the main staples of the Southern diet: corn (maize) – either ground into meal or limed with an alkaline salt to make hominy, in a Native American technology known as nixtamalization.[7] Corn was used to make all kinds of dishes, from the familiar cornbread and grits, to liquors such as whiskey and moonshine (the former of which is still important to the Southern economy).

Many fruits are available in this region. Muscadines, blackberries, raspberries, and many other wild berries were part of Southern Native Americans' diets, as well.

To a far greater degree than anyone realizes, several of the most important food dishes that the Native Americans of the southeastern U.S.A live on today is the "soul food" eaten by both Black and White Southerners. Hominy, for example, is still eaten: Sofkee lives on as grits; cornbread [is] used by Southern cooks; Indian fritters -- variously known as "hoe cake" or "Johnny cake"; Indian boiled cornbread is present in Southern cuisine as "corn meal dumplings" and "hush puppies"; Southerners cook their beans and field peas by boiling them, as did the Native tribes; and, like the Native Americans, Southerners cured their meats and smoked it over hickory coals...

Native Americans of the U.S. South also supplemented their diets with meats derived from the hunting of native game. Venison was an important meat staple due to the abundance of white-tailed deer in the area. They also hunted rabbits, squirrels and opossums. Livestock, adopted from Europeans, in the form of hogs and cattle, were kept. When game or livestock was killed, the entire animal was used. Aside from the meat, it was not uncommon for them to eat organ meats such as liver, brains and intestines. This tradition remains today in hallmark dishes like chitterlings (commonly called chit'lins) which are fried small intestines of hogs, livermush (a common dish in the Carolinas made from hog liver), and pork brains and eggs. The fat of the animals, particularly hogs, was rendered and used for cooking and frying. Many of the early European settlers in the South learned Native American cooking methods, and so cultural diffusion was set in motion for the Southern dish.

Impoverished whites and blacks in the South prepared many of the same dishes stemming from the soul tradition, but styles of preparation sometimes varied. Certain techniques popular in soul and Southern cuisines (e.g., frying meat, using all parts of the animal for consumption), are shared with ancient cultures all over the world, including Rome, Egypt, and China.[9] 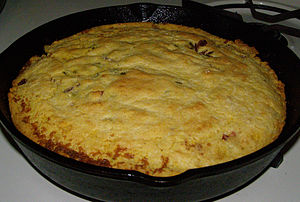 Because it was illegal in many states for enslaved Africans to learn to read or write, soul food recipes and cooking techniques tended to be passed along orally, until after emancipation. The first soul food cookbook is attributed to Abby Fisher, entitled What Mrs. Fisher Knows About Old Southern Cooking and published in 1881. Good Things to Eat was published in 1911; the author, Rufus Estes, was a former slave who worked for the Pullman railway car service. Many other cookbooks were written by African Americans during that time, but as they were not widely distributed, most are now lost.

Since the mid-20th century, many cookbooks highlighting soul food and African American foodways, compiled by African Americans, have been published and well received. Vertamae Grosvenor's Vibration Cooking, or the Travel Notes of a Geechee Girl, originally published in 1970, focused on South Carolina "Lowcountry"/Geechee/Gullah cooking. Its focus on spontaneity in the kitchen—cooking by "vibration" rather than precisely measuring ingredients, as well as "making do" with ingredients on hand—captured the essence of traditional African American cooking techniques. The simple, healthful, basic ingredients of lowcountry cuisine, like shrimp, oysters, crab, fresh produce, rice and sweet potatoes, made it a bestseller.

At the center of Black American food celebrations is the value of sharing. Therefore, African American cookbooks often have a common theme of family and family gatherings. Usher boards and Women's Day committees of various religious congregations large and small, and even public service and social welfare organizations such as the National Council of Negro Women (NCNW) have produced cookbooks to fund their operations and charitable enterprises. The NCNW produced its first cookbook, The Historical Cookbook of the American Negro, in 1958, and revived the practice in 1993, producing a popular series of cookbooks featuring recipes by famous African Americans, among them: The Black Family Reunion Cookbook (1991), Celebrating Our Mothers' Kitchens: Treasured Memories and Tested Recipes (1994), and Mother Africa's Table: A Chronicle of Celebration (1998). The NCNW also recently reissued The Historical Cookbook.

Celebrated traditional Southern chef and author Edna Lewis wrote a series of books between 1972 and 2003, including A Taste of Country Cooking (Alfred A. Knopf, 1976) where she weaves stories of her childhood in Freetown, Virginia into her recipes for "real Southern food". 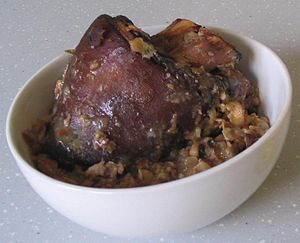 Traditionally-prepared soul foods tend to be very high in starch, fat, sodium, cholesterol, and calories. In contemporary times, some traditional-style soul foods have been implicated in the abnormally high rates of high blood pressure (hypertension), diabetes, clogged arteries (atherosclerosis), stroke, and heart attack suffered by African-Americans – especially those living in the Southern and Central United States.[citation needed] A foundational difference in how the perceived health of contemporary soul food may differ from 'traditional' styles is the widely different structures of agriculture. Fueled by federal subsidies, the agricultural system in the United States became industrialized as the nutritional value of most processed foods, and not just those implicated in a traditional perception of soul food, have degraded.[10] This urges a consideration of how concepts of racial authenticity evolve alongside changes in the structures that make some foods more available and accessible than others.[11][12]

An important aspect of the preparation of soul food was the reuse of cooking lard. Because many cooks could not afford to buy new shortening to replace what they used, they would pour the liquefied cooking grease into a container. After cooling completely, the grease re-solidified and could be used again the next time the cook required lard.

With changing fashions and perceptions of "healthy" eating, some cooks may use preparation methods that differ from those of cooks who came before them: using liquid oil like vegetable oil or canola oil for frying and cooking; and, using smoked turkey instead of pork, for example. Changes in hog farming techniques have also resulted in drastically leaner pork, in the 21st and late 20th centuries. Some cooks have even adapted recipes to include vegetarian alternatives to traditional ingredients, including tofu and soy-based analogues.[13] Critics and traditionalists have argued that attempts to make soul food healthier also make it less tasty, and even less culturally/ethnically authentic.[14]

Isolated ingredients of a soul food diet do have pronounced health benefits. Collard and other greens are rich sources of several vitamins (including vitamin A, B6, folic acid or vitamin B9, and C), minerals (manganese, iron, and calcium), fiber, and small amounts of omega-3 fatty acids. They also contain a number of phytonutrients, which are thought to play a role in the prevention of ovarian and breast cancers.[15] However, since traditional-style cooking of soul food vegetables requires high temperatures or long time periods, the water-soluble vitamins (e.g., Vitamin C and the B complex vitamins) are either destroyed or leached out into the water in which it is cooked. Additionally, the high quantity of oils used in preparing such ingredients means the final product might contain only a small amount of vegetable relative to the total amount of calories per serving. Peas, rice, and legumes are excellent, inexpensive sources of protein; they also contain important vitamins, minerals, and fiber. Sweet potatoes are a tremendous source of beta carotene and trace minerals, and have come to be classified as an "anti-diabetic" food. Recent animal studies have shown that sweet potatoes, if consumed plain and in modest amounts, can stabilize blood sugar levels and lower insulin resistance.[16]