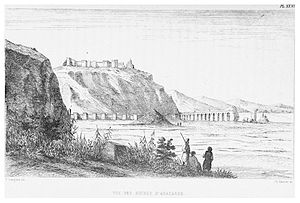 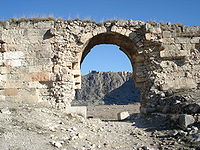 It was situated in Anatolia in modern Turkey, in the present Çukurova (or classical Aleian plain) about 15 km west of the main stream of the present Ceyhan River (or classical Pyramus river) and near its tributary the Sempas Su.

A lofty isolated ridge formed its acropolis. Though some of the masonry in the ruins is certainly pre-Roman, the Suda's identification of it with Cyinda, famous as a treasure city in the wars of Eumenes of Cardia, cannot be accepted in the face of Strabo's express location of Cyinda in western Cilicia.

It was founded by Assyrians. Under the early Roman empire the place was known as Caesarea, and was the Metropolis (capital) of Roman province Cilicia Secunda. It was the home of the poet Oppian.

Rebuilt by the emperor Justin I after an earthquake in the 6th century, it became Justinopolis (525); but the old native name persisted, and when Thoros I, king of Lesser Armenia, made it his capital early in the 12th century, it was known as Anazarva.

Its great natural strength and situation, not far from the mouth of the Sis pass, and near the great road which debouched from the Cilician Gates, made Anazarbus play a considerable part in the struggles between the Byzantine Empire and the early Muslim invaders. It had been rebuilt by Harun al-Rashid in 796, refortified at great expense by the Hamdanid Sayf al-Dawla (mid-10th century) but was then sacked by the Crusaders and returned to the Armenians. Most of the remaining fortifications, including the Curtain walls and Keep, date to this period and were built by the Armenians. The Mamluk Empire of Egypt finally destroyed the city in 1374.

The present wall of the lower city is of late construction. It encloses a mass of ruins conspicuous in which are a fine triumphal arch, the colonnades of two streets, a gymnasium, etc. A stadium and a theatre lie outside the walls to the south. The remains of the acropolis fortifications are very interesting, including roads and ditches hewn in the rock; but beyond ruins of two churches, a gatehouse, and a fine keep built by Thoros I. There are no notable structures in the upper town. For picturesqueness the site is not equalled in Cilicia, and it is worthwhile to trace the three fine aqueducts to their sources. A necropolis on the escarpment to the south of the curtain wall can also be seen complete with signs of illegal modern excavations.

A visit in December 2002 showed that the three aqueducts mentioned above have been nearly completely destroyed. Only small, isolated sections are left standing with the largest portion lying in a pile of rubble that stretches the length of where the aqueducts once stood. A powerful earthquake that struck the area in 1945 is thought to be responsible for the destruction.

A modest Turkish farming village (Dilekkaya) lies to the southwest of the ancient city. A small outdoor museum with some of the artifacts collected in the area can be viewed for a small fee. Also nearby are some beautiful mosaics discovered in a farmers field. Inquire at the museum for a viewing.

Anazarbus/Anavarsa was one of a chain of Armenian fortifications stretching through Cilicia. Sis Castle (modern Kozan, Adana) lies to the north while Tumlu Kale (Tumlu Castle) lies to the southwest and Amouda Castle to the Southeast.

Anazarbus was the capital and so also from 553 (the date of the Second Council of Constantinople) the metropolitan see of the Roman province of Cilicia Secunda. A 6th century Notitia Episcopatuum indicates that it has as suffragan sees Epiphania, Alexandria Minor, Irenopolis, Flavias, Castabala and Aegeae. Rhosus was also subject to Anazarbus, but after the 6th century was made exempt, and Mopsuestia was raised to the rank of autcephalous metropolitan see, though without suffragans.[1][2][3][4]

The archdiocese was nominally restored in the 18th century, when was established a Latin Catholic Metropolitan Titular archbishopric of Anazarbus.

It is vacant, having had the following incumbents, generally of the highest (Metropolitan) rank :

In the 19th century, an Armenian Catholic titular bishopric of Anazarbus (of the Armenians) (Anazarbus degli Armeniin Curiate Italian) was established.

It was a suppressed in 1933, [5] [5] having had a single incumbent, of the intermediary (archiepiscopal) rank :