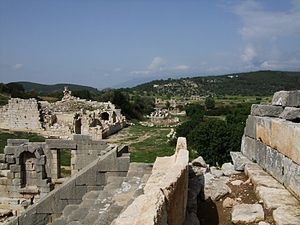 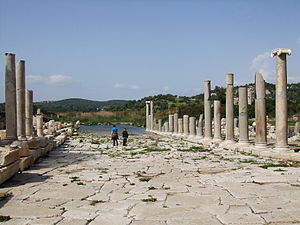 A view of the partially restored main street of Patara 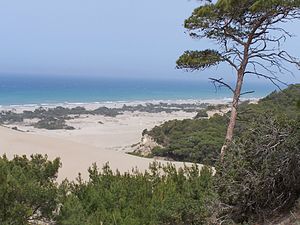 Patara Beach on the Turkish Riviera

Patara (Lycian: Pttara), later renamed Arsinoe (Greek: Ἀρσινόη), was a flourishing maritime and commercial city on the south-west coast of Lycia on the Mediterranean coast of Turkey near the modern small town of Gelemiş, in Antalya Province. It is the birthplace of St. Nicholas, who lived most of his life in the nearby town of Myra (Demre).

Possessing a natural harbour, Patara was said to have been founded by Patarus, a son of Apollo.[1] It was situated at a distance of 60 stadia to the southeast of the mouth of the river Xanthos.[2] Patara was noted in antiquity for its temple and oracle of Apollo, second only to that of Delphi.[citation needed] The god is often mentioned with the surname Patareus.[3] Herodotus[4] says that the oracle of Apollo was delivered by a priestess only during a certain period of the year; and from Servius[5] we learn that this period was the six winter months. It seems certain that Patara received Dorian settlers from Crete; and the worship of Apollo was certainly Dorian. Ancient writers mentioned Patara as one of the principal cities of Lycia.[6] It was Lycia's primary seaport, and a leading city of the Lycian League, having 3 votes, the maximum.

The city, with the rest of Lycia, surrendered to Alexander the Great in 333 BC. During the Wars of the Diadochi, it was occupied in turn by Antigonus and Demetrius, before finally falling to the Ptolemies. Strabo informs us that Ptolemy Philadelphus of Egypt, who enlarged the city, gave it the name of Arsinoe (Arsinoë) after Arsinoe II of Egypt, his wife and sister, but it continued to be called by its ancient name, Patara. Antiochus III captured Patara in 196 BC. The Rhodians occupied the city, and as a Roman ally, the city with the rest of Lycia was granted its freedom in 167 BC. In 88 BC, the city suffered siege by Mithridates IV, king of Pontus and was captured by Brutus and Cassius, during their campaign against Mark Antony and Augustus. It was spared the massacres that were inflicted on nearby Xanthos. Patara was formally annexed by the Roman Empire in 43 AD and attached to Pamphylia.

Patara is mentioned in the New Testament[7] as the place where Paul of Tarsus and Luke changed ships. The city was Christianized early, and several early bishops are known; according to Le Quien,[8] they include:

Nicholas of Myra was born at Patara in ca. 280. He is believed to have died on December 6, 343. Archaeological investigation of his remains at Basilica di San Nicola in Bari, Italy, show that he suffered persecution under the Emperor Diocletian, who exiled and imprisoned him, including a broken nose. After his release, Nicholas attended the First Council of Nicaea in AD 325. Over the years, stories of his miracles involving rescuing children and working for the poor spread to other parts of the world. He became known as the protector of children and sailors and was associated with gift-giving, especially to children. He was a popular saint in Europe until the time of the Reformation in the 1500s, a religious movement that led to the creation of Protestantism, which turned away from the practice of honoring saints. St. Nicholas, however, remained an important figure in Holland, where his feast day was celebrated with the giving of gifts to children who behaved well. Dutch immigrants brought St. Nicholas, known to them as Sint Nikolaas or by his nickname Sinter Klaas, and traditions of his feast day to their colonies in America. He became popularised in America as Santa Claus and his gift-giving day moved from December 6 to Christmas, in line with traditions of other European countries of a figure who accompanies the baby Jesus to give gifts to good children.

Patara is mentioned among the Lycian bishoprics in the Acts of Councils (Hierocl. p. 684). The Notitiae Episcopatuum mention it among the suffragans of Myra as late as the thirteenth century.

The city remained of some importance during the Byzantine Empire as a way-point for trade and pilgrims. During the wars between the Turks and the Byzantines, the city was largely abandoned. With the demise of the bishopric as a residential see, Patara became a titular see and is included as in the Catholic Church's list of such sees.[9]

The name Patara is still attached to the numerous ruins of the city. These, according to the survey of Capt. Beaufort, are situated on the sea-shore, a little to the eastward of the river Xanthus, and consist of a theatre excavated in the northern side of a small hill, a ruined temple on the side of the same hill, and a deep circular pit, of singular appearance, which may have been the seat of the oracle. The town walls surrounded an area of considerable extent; they may easily be traced, as well as the situation of a castle which commanded the harbour, and of several towers which flanked the walls. On the outside of the walls there is a multitude of stone sarcophagi, most of them bearing inscriptions, but all open and empty; and within the walls, temples, altars, pedestals, and fragments of sculpture appear in profusion, but ruined and mutilated. The situation of the harbour is still apparent, but it is a swamp, choked up with sand and bushes. (Beaufort, Karmania, pp. 2, 6.) The theatre[10] was built in the reign of Antoninus Pius; its diameter is 265 feet, and has about 30 rows of seats. There are also ruins of thermae, which, according to an inscription upon them, were built by Vespasian.[11]

In 1993 a Roman milestone was unearthed at Patara, the Stadiasmus Patarensis. It is a monumental pillar on which is inscribed in Greek a dedication to Claudius and an official announcement of roads being built by the governor, Quintus Veranius, in the province of Lycia et Pamphylia, giving place names and distances, essentially a monumental public itinerarium.[12] The pillar is on display in the garden of the Antalya Museum.

The site is currently being excavated during two summer months each year by a team of Turkish archaeologists. At the end of 2007, all the sand had been cleared from the theatre and some other buildings, and the columns on the main street had been partially re-erected (with facsimile capitals). The excavations have revealed masonry in remarkable condition.

Apart from its ancient ruins, Patara is also famous for the 18 kilometres (11 mi)-long Patara Beach, which is situated on the Turkish Riviera.