Lampsacus (/ˈlæmsəkəs/; Ancient Greek: Λάμψακος, Lampsakos) was an ancient Greek city strategically located on the eastern side of the Hellespont in the northern Troad.[1] An inhabitant of Lampsacus was called a Lampsacene. The name has been transmitted in the nearby modern town of Lapseki.

Originally known as Pityusa or Pityussa[2] (Ancient Greek: Πιτυούσ(σ)α), it was colonized from Phocaea and Miletus. In the 6th century BC Lampsacus was attacked by Miltiades the Elder and Stesagoras, the Athenian tyrants of the nearby Thracian Chersonese.[3] During the 6th and 5th centuries BC, Lampsacus was successively dominated by Lydia, Persia, Athens, and Sparta; Artaxerxes I assigned it to Themistocles with the expectation that the city supply the Persian king with its famous wine. When Lampsacus joined the Delian League after the battle of Mycale (479 BC), it paid a tribute of twelve talents, a testimony to its wealth; it had a gold coinage in the 4th century, an activity only available to the more prosperous cities.[4] 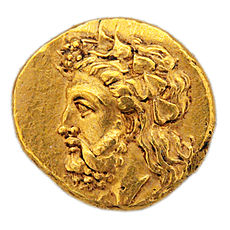 Gold stater of Lampsacus with the ivy-wreathed head of Dionysus/Priapus, c. 360–340 BC

A revolt against the Athenians in 411 BC was put down by force. In 196 BC, the Romans defended the town against Antiochus the Great, and it became an ally of Rome; Cicero (2 Verr. i. 24. 63) and Strabo (13. 1. 15) attest its continuing prosperity under Roman rule. Lampsacus was also notable for its worship of Priapus, who was said to have been born there.

The philosopher Anaxagoras was forced to retire to Lampsacus after a trial in Athens around 434-33 BC. The citizens of Lampsacus erected an altar to Mind and Truth in his honor, and observed the anniversary of his death for many years.

According to legend, St Tryphon was buried at Lampsacus after his martyrdom at Nicaea in 250.[6]

The first known bishop in Lampsacus was Parthenius, under Constantine I. In 364, the see was occupied by Marcian and in the same year a council of bishops was held at Lampsacus. Marcian, was summoned to the First Council of Constantinople of Constantinople in 381, but refused to retract his adherence of the Macedonian Christian sect. Other known Bishops of Lampsacus were Daniel, who assisted at the Council of Chalcedon (451); Harmonius (458); Constantine (680), who attended the Third Council of Constantinople; John (787), at Nicaea; St. Euschemon, a correspondent of St. Theodore the Studite, and a confessor of the Faith for the veneration of images, under Theophilus. The See of Lampsacus is mentioned in the "Notitiae Episcopatuum" until about the 12th or 13th century.[7] The famous Lampsacus Treasure, now in the British Museum, dates from this period.