Nicomedia (/ˌnɪkəˈmiːdiə/;[1] Greek: Νικομήδεια, Nikomedeia; modern İzmit) was an ancient city in what is now Turkey.

Founded in 712/11 BC as a Megarian colony and was originally known as Astacus (/ˈæstəkəs/; Ancient Greek: Ἀστακός, "lobster").[2] After being destroyed by Lysimachus,[3] it was rebuilt by Nicomedes I of Bithynia in 264 BC under the name of Nicomedia, and has ever since been one of the most important cities in northwestern Asia Minor. The great military commander Hannibal Barca came to Nicomedia in his final years and committed suicide in nearby Libyssa (Diliskelesi, Gebze). The historian Arrian was born there. 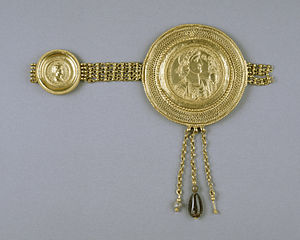 This section of a belt depicting medallions honoring Constantius II and Faustina was minted in Nicomedia.[4] The Walters Art Museum.

Nicomedia was the metropolis of Bithynia under the Roman Empire, and Diocletian made it the eastern capital city of the Roman Empire in 286 when he introduced the Tetrarchy system. Nicomedia remained as the eastern (and most senior) capital of the Roman Empire until co-emperor Licinius was defeated by Constantine the Great at the Battle of Chrysopolis (Üsküdar) in 324. Constantine mainly resided in Nicomedia as his interim capital city for the next six years, until in 330 he declared the nearby Byzantium (which was renamed Constantinople) the new capital. Constantine died in a royal villa in the vicinity of Nicomedia in 337. Owing to its position at the convergence of the Asiatic roads leading to the new capital, Nicomedia retained its importance even after the foundation of Constantinople.[5]

A major earthquake, however, on 24 August 358, caused extensive devastation to Nicomedia, and was followed by a fire which completed the catastrophe. Nicomedia was rebuilt, but on a smaller scale.[6] In the sixth century under Emperor Justinian I the city was extended with new public buildings. Situated on the roads leading to the capital, the city remained a major military center, playing an important role in the Byzantine campaigns against the Caliphate.[7]

In 451, the local bishopric was promoted to a Metropolitan see under the jurisdiction of the Ecumenical Patriarchate of Constantinople.[8] The metropolis of Nicomedia was ranked 7th in the Notitiae Episcopatuum among the metropolises of the Patriarchate.[9] From the 840s on, Nicomedia was the capital of the thema of the Optimatoi. By that time, most of the old, seawards city had been abandoned and is described by the Persian geographer Ibn Khurdadhbih as lying in ruins. The settlement had obviously been restricted to the hilltop citadel.[7] In the 1080s, the city served as the main military base for Alexios I Komnenos in his campaigns against the Seljuk Turks, and the First and Second Crusades both encamped there.

The city was briefly held by the Latin Empire following the fall of Constantinople to the Fourth Crusade in 1204: in late 1206 the seneschal Dietrich von Los made it his base, converting the church of Saint Sophia into a fortress; however the Crusader stronghold was subjected to constant raids by the Emperor of Nicaea Theodore I Laskaris, during which von Los was captured by Nicaean soldiers; by the summer of 1207 Emperor Henry of Flanders to agreed to evacuate Nicomedia in exchange for von Los and other prisoners Emperor Theodore held.[10] The city remained in Byzantine control for over a century after that, but following the Byzantine defeat at the Battle of Bapheus in 1302, it was threatened by the rising Ottoman beylik. The city was twice blockaded by the Ottomans (in 1304 and 1330) before finally succumbing in 1337.[7]