Hattusa (Hittite: 𒌷𒄩𒀜𒌅𒊭, URUḪa-at-tu-ša, read "Ḫattuša", Turkish: Hattuşaş) was the capital of the Hittite Empire in the late Bronze Age. Its ruins lie near modern Boğazkale, Turkey, within the great loop of the Kızılırmak River (Hittite: Marashantiya; Greek: Halys).

Hattusa was added to the UNESCO World Heritage list in 1986.

The landscape surrounding the city included rich agricultural fields and hill lands for pasture as well as woods. Smaller woods are still found outside the city, but in ancient times, they were far more widespread. This meant the inhabitants had an excellent supply of timber when building their houses and other structures. The fields provided the people with a subsistence crop of wheat, barley and lentils. Flax was also harvested, but their primary source for clothing was sheep wool. They also hunted deer in the forest, but this was probably only a luxury reserved for the nobility. Domestic animals provided meat.

There were several other settlements in the vicinity, such as the rock shrine at Yazılıkaya and the town at Alacahöyük. Since the rivers in the area are unsuitable for major ships, all transport to and from Hattusa had to go by land.

Twelve Hittite gods of the Underworld in the nearby Yazılıkaya, a sanctuary of Hattusa

Before 2000 BC, a settlement of the apparently indigenous Hatti people was established on sites that had been occupied even earlier and referred to the site as Hattush. The Hattians built their initial settlement on the high ridge of Büyükkale.[1] The earliest traces of settlement on the site are from the sixth millennium BC. In the 19th and 18th centuries BC, merchants from Assur in Assyria established a trading post there, setting up in their own separate quarter of the city. The center of their trade network was located in Kanesh (Neša) (modern Kültepe). Business dealings required record-keeping: the trade network from Assur introduced writing to Hattusa, in the form of cuneiform.

A carbonized layer apparent in excavations attests to the burning and ruin of the city of Hattusa around 1700 BC. The responsible party appears to have been King Anitta from Kussara, who took credit for the act and erected an inscribed curse for good measure:

Whoever after me becomes king resettles Hattusas, let the Stormgod of the Sky strike him![2] 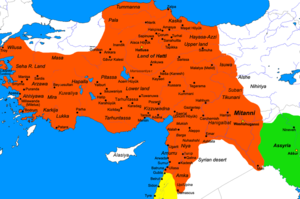 Map of the Hittite Empire in 14th century BC

Only a generation later, a Hittite-speaking king had chosen the site as his residence and capital. The Hittite language had been gaining speakers at Hattic's expense for some time. The Hattic Hattus now became the Hittite Hattusa, and the king took the name of Hattusili I, the "one from Hattusa". Hattusili marked the beginning of a non-Hattic-speaking "Hittite" state and of a royal line of Hittite Great Kings — 27 of whom are now known by name.

After the Kaskas arrived to the kingdom's north, they twice attacked the city to the point where the kings had to move the royal seat to another city. Under Tudhaliya I, the Hittites moved north to Sapinuwa, returning later. Under Muwatalli II, they moved south to Tarhuntassa but assigned Hattusili III as governor over Hattusa. Mursili III returned the seat to Hattusa, where the kings remained until the end of the Hittite kingdom in the 12th century BC. 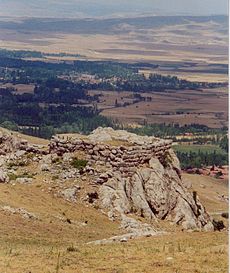 Yenicekale, between the Lion Gate and the outer city

At its peak, the city covered 1.8 km² and comprised an inner and outer portion, both surrounded by a massive and still visible course of walls erected during the reign of Suppiluliuma I (circa 1344–1322 BC (short chronology)). The inner city covered an area of some 0.8 km² and was occupied by a citadel with large administrative buildings and temples. The royal residence, or acropolis, was built on a high ridge now known as Büyükkale (Great Fortress).[3]

The Great Temple in the inner city

To the south lay an outer city of about 1 km², with elaborate gateways decorated with reliefs showing warriors, lions, and sphinxes. Four temples were located here, each set around a porticoed courtyard, together with secular buildings and residential structures. Outside the walls are cemeteries, most of which contain cremation burials. Modern estimates put the population of the city between 40,000 and 50,000 at the peak; in the early period, the inner city housed a third of that number. The dwelling houses that were built with timber and mud bricks have vanished from the site, leaving only the stone-built walls of temples and palaces.

The city was destroyed, together with the Hittite state itself, around 1200 BC, as part of the Bronze Age collapse. Excavations suggest that Hattusa was gradually abandoned over a period of several decades as the Hittite empire disintegrated.[4] The site was subsequently abandoned until 800 BC, when a modest Phrygian settlement appeared in the area. 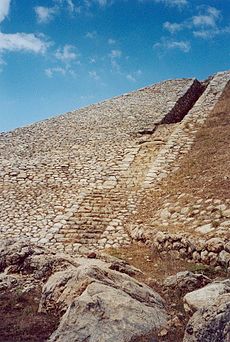 The Yerkapi rampart in the south

Ernest Chantre opened some trial trenches at the village then called Boğazköy, in 1893-94.[5] Since 1906, the German Oriental Society has been excavating at Hattusa (with breaks during the two World Wars and the Depression, 1913–31 and 1940–51). Archaeological work is still carried out by the German Archaeological Institute (Deutsches Archäologisches Institut). Hugo Winckler and Theodore Makridi Bey conducted the first excavations in 1906, 1907, and 1911–13, which were resumed in 1931 under Kurt Bittel, followed by Peter Neve (site director 1963, general director 1978–94).[6]

One of the most important discoveries at the site has been the cuneiform royal archives of clay tablets, consisting of official correspondence and contracts, as well as legal codes, procedures for cult ceremony, oracular prophecies and literature of the ancient Near East. One particularly important tablet, currently on display at the Istanbul Archaeology Museum, details the terms of a peace settlement reached years after the Battle of Kadesh between the Hittites and the Egyptians under Ramesses II, in 1259 or 1258 BC. A copy is on display in the United Nations in New York City as an example of the earliest known international peace treaties.

Although the 30,000 or so clay tablets recovered from Hattusa form the main corpus of Hittite literature, archives have since appeared at other centers in Anatolia, such as Tabigga (Maşat Höyük) and Sapinuwa (Ortaköy). They are now divided between the archaeological museums of Ankara and Istanbul.

A pair of sphinxes found at the southern gate in Hattusa were taken for restoration to Germany in 1917. The better-preserved sphinx was returned to Constantinople in 1924 and was placed on display in the Istanbul Archaeology Museum, whereas the other remained in Germany and had been on display at the Pergamon Museum since 1934.[7] Previously, Turkey had made numerous requests for its return.

In 2011, threats by Turkish Ministry of Culture to impose restrictions on German archaeologists working in Turkey finally persuaded Germany to return the sphinx. The Istanbul sphinx was also brought back to its place of origin and the pair were reunited in Boğazköy Museum outside the Hattusa ruins.[8]