From Infogalactic: the planetary knowledge core
Jump to: navigation, search
This article is about the food. For other uses, see Apple pie (disambiguation). 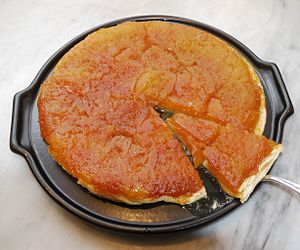 An apple pie is a fruit pie in which the principal filling ingredient is apple. It is, on occasion, served with whipped cream or ice cream on top, or alongside cheddar cheese. The pastry is generally used top-and-bottom, making it a double-crust pie, the upper crust of which may be a circular shaped crust or a pastry lattice woven of strips; exceptions are deep-dish apple pie with a top crust only, and open-face Tarte Tatin.

Cooking apples[3] (culinary apples), such as the Bramley, Empire, Northern Spy or Granny Smith,[4] are more crisp and acidic than regular apples. The fruit for the pie can be fresh, canned, or reconstituted from dried apples. This affects the final texture and the length of cooking time required but people disagree as to if it affects the flavour or not. Dried or preserved apples were originally substituted only at times when fresh fruit was unavailable.

Apple pie is often served in the style of "à la Mode" (topped with ice cream). Alternatively, a piece of cheese (such as a sharp cheddar) is, at times, placed on top of or alongside a slice of the finished pie.[5][6][7]

Traditional Dutch apple pie comes in two varieties, a crumb (appelkruimeltaart) and a lattice (appeltaart) style pie. Both recipes are distinct in that they typically call for flavourings of cinnamon and lemon juice to be added and differ in texture, not taste.[8] Dutch apple pies may include ingredients such as full-cream butter, raisins and almond paste, in addition to ingredients such as apples and sugar, which they have in common with other recipes.[9]

Recipes for Dutch apple pie go back centuries. There exists a painting from the Dutch Golden Age, dated 1626, featuring such a pie.[citation needed] A recipe in a late medieval Dutch cook book 'Een notabel boecxken van cokeryen' (from around 1514)[10] is almost identical to modern recipes.

The basis of Dutch apple pie is a crust on the bottom and around the edges. This crust is then filled with pieces or slices of apple, usually a crisp and mildly tart variety such as Goudreinet or Elstar. Cinnamon and sugar are generally mixed in with the apple filling. Atop the filling, strands of dough cover the pie in a lattice holding the filling in place but keeping it visible or cover the pie with crumbs. It can be eaten warm or cold, sometimes with a dash of whipped cream or vanilla ice cream. In the US, "Dutch apple pie" refers specifically to the apple pie style with a crumb, streusel, topping.[11]

"For to Make Tartys in Applis", 18th-century print of a 14th-century recipe

English apple pie recipes go back to the time of Chaucer. The 1381 recipe (see illustration at right) lists the ingredients as good apples, good spices, figs, raisins and pears. The cofyn of the recipe is a casing of pastry. Saffron is used for colouring the pie filling.

In English-speaking countries, apple pie is a dessert of enduring popularity, whether it's eaten hot or cold, on its own or with ice cream, double cream, or custard.

The Swedish style apple pie is predominantly a variety of apple crumble, rather than a traditional pastry pie. Often, breadcrumbs are used (wholly or partially) instead of flour, and sometimes rolled oats. It is usually flavoured with cinnamon and served with vanilla custard or ice cream. There is also a very popular version called äppelkaka (apple cake), which differs from the pie in that it is a sponge cake baked with fresh apple pieces in it. 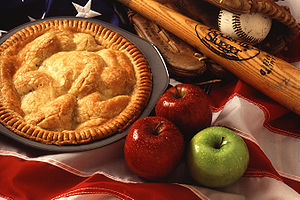 An apple pie is one of a number of American cultural icons.

Apple pie was brought to the colonies by the British, Dutch, and Swedes during the 17th and 18th centuries.

The apple pie had to wait for the planting of European varieties, brought across the Atlantic, to become fruit-bearing apple trees, to be selected for their cooking qualities as there were no native apples except crabapples, which yield very small and sour fruit.[12] In the meantime, the colonists were more likely to make their pies, or "pasties", from meat rather than fruit; and the main use for apples, once they were available, was in cider. However, there are American apple pie recipes, both manuscript and printed, from the 18th century, and it has since become a very popular dessert[citation needed]. Apple varieties are usually propagated by grafting, as clones, but in the New World, planting from seeds was more popular, which quickly led to the development of hundreds of new native varieties.[13]

Apple pie was a common food in 18th-century Delaware. As noted by the New Sweden historian Dr. Israel Acrelius in a letter: "Apple pie is used throughout the whole year, and when fresh Apples are no longer to be had, dried ones are used. It is the evening meal of children."[14]

A mock apple pie, made from crackers, was possibly invented by pioneers on the move during the 19th century who were bereft of apples. However, it's possible that it was invented during the American Civil War based on the food shortages experienced by the Southern States.[15] In the 1930s, and for many years afterwards, Ritz Crackers promoted a recipe for mock apple pie using its product, along with sugar and various spices.[16]

Although apple pies have been eaten since long before the European colonisation of the Americas, "as American as apple pie" is a saying in the United States, meaning "typically American".[17] In the nineteenth and twentieth centuries, apple pie became a symbol of American prosperity and national pride. A newspaper article published in 1902 declared that "No pie-eating people can be permanently vanquished."[18] The dish was also commemorated in the phrase "for Mom and apple pie" - supposedly the stock answer of American soldiers in World War II, whenever journalists asked why they were going to war. Jack Holden and Frances Kay sang in their patriotic 1950 song The Fiery Bear, creating contrast between this symbol of U.S. culture and the Russian bear of the Soviet Union:

Advertisers exploited the patriotic connection in the 1970s with the commercial jingle "baseball, hot dogs, apple pie and Chevrolet".

Today, modern American recipes for apple pie usually indicate a confection that is 9 inches in diameter in a fluted pie plate with an apple filling spiced with cinnamon, nutmeg. and lemon juice, and may or may not have a lattice or shapes cut out of the top for decoration.[19] The unincorporated community of Pie Town, New Mexico is named after apple pie.[20]