From Infogalactic: the planetary knowledge core
Jump to: navigation, search
"Earl of Stafford" redirects here. Not to be confused with Earl of Strafford. 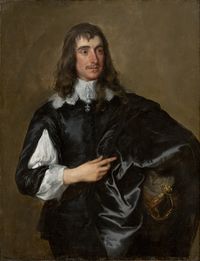 Baron Stafford, referring to Stafford, is a title that has been created several times in the Peerage of England. In the 14th century, the barons of the 1st creation were made earls. Those of the fifth creation, in the 17th century became first viscounts and then earls.

History of the title

The first creation was by writ in 1299 for Edmond de Stafford. His successor, the second baron, was made Earl of Stafford in 1351, and the sixth earl was made Duke of Buckingham in 1444. The sixth earl was the son of Anne of Gloucester, Countess of Buckingham, daughter of Thomas of Woodstock, Earl of Buckingham (later Duke of Gloucester), youngest son of King Edward III of England. Stafford was an important supporter of the House of Lancaster in the Wars of the Roses, and was killed at the Battle of Northampton in July 1460. The 1st Duke of Buckingham was succeeded in his titles by his grandson Henry, who aided Richard III in his claiming the throne in 1483 (Edward IV of England's marriage to Elizabeth Woodville having been declared null and void and Edward's sons illegitimate by Act of Parliament Titulus Regius), but who then led a revolt against Richard. He was executed for treason in 1483 and his titles were declared forfeit. His son Edward was restored as 3rd Duke upon Henry VII's accession to the throne in 1485, but he was ultimately executed in 1521 due to his opposition to Cardinal Thomas Wolsey, Henry VIII's chief advisor. When he was executed for treason, his titles were declared forfeit.

A second creation, again by writ, was for Richard Stafford, who was created Baron Stafford of Clifton. At the death of the fourth baron, that title fell into abeyance.

The third creation was for Sir Hugh Stafford, son of Hugh Stafford, 2nd Earl of Stafford in 1411; he had married Elizabeth Bouchier, who succeeded to the Barony of Bouchier. Hugh was summoned to parliament in lieu of his wife, as Baron Stafford. At his death, this title became extinct since he left no heirs.

The fifth creation of the title came in 1640 in favour of William Howard. He was the third and youngest son of Thomas Howard, 21st Earl of Arundel, grandson of Thomas Howard, 4th Duke of Norfolk (see the Duke of Norfolk). He married Mary Stafford, only sister of Henry Stafford, 5th Baron de Stafford (of the 1547 creation, which is considered to have become extinct upon the death of Mary's uncle, the sixth Baron, sometime around 1640). On 12 September 1640 William Howard was created Baron Stafford, with remainder, in default of heirs male of the body, to the heirs of his body by his wife Mary and with the precedence of the 1547 barony. The same day Mary was made Baroness Stafford in her own right. This title was for life only. Two months later, on 11 November, William Howard was created Viscount Stafford, with remainder to his issue male.

Lord Stafford later became implicated in the Titus Oates plot, where fabricated evidence was used to prove an alleged Catholic plot against Charles II. He was attainted in 1678, with his titles forfeited. In 1680 he was impeached by the House of Commons and executed. After the accession of the Catholic James II, Mary, Baroness Stafford, was created Countess of Stafford for life in 1688. On the same day, her eldest son by Lord Stafford, Henry Stafford-Howard, was created Earl of Stafford, with remainder to his brothers John and Francis. However, he was not allowed to succeed in the barony or viscountcy of Stafford as these titles were still under attainder.

Henry was succeeded according to the special remainder by his nephew, the second Earl (the eldest son of John). He was succeeded by his son, the third Earl. When he died childless, the title passed to his uncle, the fourth Earl. He was also childless and on his death in 1762 the earldom became extinct (the viscountcy of Stafford also formally became extinct, although the title was then under attainder). The claim to the barony of Stafford passed to the late Earl's niece, Anastasia, the de jure sixth Baroness Stafford. She was the daughter of the second Earl of Stafford. However, Anastasia was childless and on her death in 1807 the claim passed to her first cousin once removed, Sir William Jerningham, 6th Baronet, of Cossey (see Jerningham Baronets for earlier history of this title). He was the son of Sir George Jerningham, 5th Baronet, and his wife Mary, Lady Jerningham, only daughter of Mary Plowden, sister of the fourth Earl of Stafford.

Jerningham died in 1809 when the claim passed to his son Sir George William Jerningham, 7th Baronet. He petioned the House of Lords for a reversal of the attainder and for a writ of summons Parliament. In 1824 the attainder of the first Baron was completely reversed, and on 6 July 1825 the House of Lords decided that Jerningham had been successful in his claim to the barony. He was summoned to Parliament the same year as the eighth Baron Stafford. In 1826 he assumed by Royal licence the additional surname and arms of Stafford. He was succeeded by his eldest son, the ninth Baron. He had earlier represented Pontefract in the House of Commons. When he died the titles passed to his nephew, the tenth Baron, and then to the latter's brother, the eleventh Baron. On the eleventh Baron's death in 1913 the barony and baronetcy separated. The baronetcy was passed on to Sir Henry William Stafford Jerningham, 11th Baronet (on whose death in 1935 the title became extinct; see Jerningham Baronets).

The barony, which could be inherited through female lines, was passed on to the late Baron's nephew Francis Edward Fitzherbert, the twelfth Baron. He was the son of Emily Charlotte (sister of both the tenth and eleventh Baron) and her husband Basil Thomas Fitzherbert. He assumed in 1913 by Royal licence the additional surname and arms of Stafford. He was succeeded by his younger brother, the thirteenth Baron. He was an Admiral in the Royal Navy. On his death the title passed to his nephew, the fourteenth Baron. As of 2010[update] the barony is held by the latter's son, the fifteenth Baron, who succeeded his father in 1986.

The seat of the Jerningham family, who held the title from 1825 to 1913, was Costessey Hall in Norfolk. The seat of the Fitzherbert family is Swynnerton Hall in Swynnerton, near Stone, Staffordshire

A second barony of Stafford, with the modifier of Clifton, was created by writ of summons 8 January 1371: Richard Stafford (d. 1380), the younger son of Edmund de Stafford, 1st Baron Stafford, married Maud de Camville, daughter and heir of Richard de Camville of Clifton. Richard fought in the French wars of Edward III and was also appointed seneschal of Gascony. Their son, also Richard, was summoned to Parliament by Edward III and regularly participated through to 1379. He was appointed 1st Baron Stafford of Clifton. The barony then passed through: