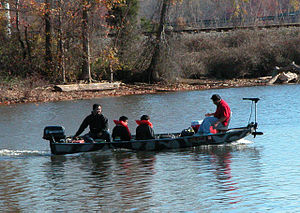 A bass boat is a small boat that is designed and equipped primarily for bass fishing or fishing for other panfish, usually in freshwater such as lakes, rivers and streams. The modern bass boat features swivel chairs that permit the angler to cast to any position around the boat, storage bins for fishing tackle and equipment such as rods and lures, and a live well with recirculating water where caught fish may be stored and kept alive.

Bass boats are typically either constructed of aluminum or fiberglass. The aluminum boats are lighter and typically smaller in size and less expensive than the fiberglass versions. The fiberglass renditions, however, offer more space, better handling, and the ability to house larger outboard motors.

The developer of the modern bass boat is widely considered to be Skeeter Fishing Boats, a company now owned by Yamaha. In 1948 Holmes Thurmond designed and launched the first Skeeter boat. By no means was it the last "first" for Skeeter. In 1961, he built the first bass boat from fiberglass, a huge leap forward in performance and durability. Other well-known bass boat manufacturers include Ranger, Nitro, Tracker, Triton, Stratos, Bass Cat, Champion, Lowe, G3, and Xpress.

An older usage of the term “bass boat” refers to a type of sport fishing boat once popular for fishing for striped bass off the Atlantic coast of the United States. These bass boats were about 25 feet long and featured a hull form similar to a New England lobster boat with a sharp entry, rounded bilges, and relatively little deadrise at the stern. They were powered with inboard engines and had a top speed of about 20 knots. The typical deck configuration featured a long cockpit with a windshield at the forward end and a cuddy cabin in the bow. Examples still in production include the Fortier 26 and the Dyer 29. Some outboard-powered sport fishing boats emulate bass boat styling including the Steiger Craft Block Islands and the Parker 2310 and 2510; however, these boats have a more sharply V’ed hull form and are designed for higher speeds.