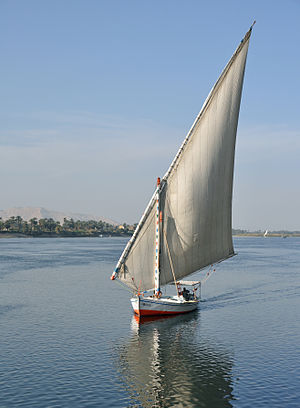 Felucca on the Nile at Luxor

A felucca (Arabic: فلوكة‎‎) is a traditional wooden sailing boat used in protected waters of the Red Sea and eastern Mediterranean including Malta, and particularly along the Nile in Egypt, Sudan, and also in Iraq. Its rig consists of one or two lateen sails.

They are usually able to board ten passengers and the crew consists of two or three people. Despite being made obsolete by motorboats and ferries, feluccas are still in active use as a means of transport in Nile-adjacent cities like Aswan or Luxor. They are especially popular among tourists who can enjoy a quieter and calmer mood than motorboats have to offer.

A large fleet of lateen-rigged feluccas thronged San Francisco's docks before and after the construction of the state-owned Fisherman's Wharf in 1884.[citation needed] Light, small, and maneuverable, the feluccas were the mainstay of the fishing fleet of San Francisco Bay. John Muir said of them, "These workhorses featured a mast that angled, or raked, forward sharply, and a large triangular sail hanging down from a long, two-piece yard".