Cook County's population is larger than that of 29 individual U.S. states and the combined populations of the seven smallest states.[3] There are 135 incorporated municipalities partially or wholly within Cook County, the largest of which is Chicago, which makes up approximately 54% of the population of the county. That part of the county which lies outside of the Chicago city limits is divided into 30 townships. Geographically the county is the fifth largest in Illinois by land area and shares the state's Lake Michigan shoreline with Lake County. Including its lake area, the county has a total area of 1,635 square miles (4,234.6 km2), the largest county in Illinois, of which 945 square miles (2,447.5 km2) is land and 690 square miles (1,787.1 km2) (42.16%) is water. Cook County's land is mainly urban and very densely populated.

Cook County is included in the Chicago-Naperville-Elgin, IL-IN-WI Metropolitan Statistical Area. It is surrounded by the five collar counties.

Cook County was created on January 15, 1831, out of Putnam County by an act of the Illinois General Assembly. It was the 54th county established in Illinois and was named after Daniel Cook, one of the earliest and youngest statesmen in Illinois history, who served as the second U.S. Representative from Illinois and the state's first Attorney General. In 1839, DuPage County was carved out of Cook County.

The Cook County Department of Transportation is responsible for the design and maintenance of roadways in the county. These thoroughfares are mostly composed of major and minor arterials, with a few local roads. Although the Department of Transportation was instrumental in designing many of the expressways in the county, today they are under the jurisdiction of the state.

The Cook County Forest Preserves, organized in 1915, is a separate, independent taxing body, but the Cook County Board of Commissioners also acts as its Board of Commissioners. The district is a belt of 69,000 acres (280 km2) of forest reservations surrounding the city of Chicago. The Brookfield Zoo (managed by the Chicago Zoological Society) and the Chicago Botanic Garden (managed by the Chicago Horticultural Society) are located in the forest preserves.

Cook County is the fifth largest employer in Chicago.[6]

The county has more Democratic Party members than any other Illinois county and is one of the most Democratic counties in the United States. It has voted only once for a Republican candidate in a Presidential election in the last 50 years, when county voters preferred Richard Nixon to George McGovern in 1972. The 1970 Illinois Constitution allows the controlling party to redraw voting districts; The Republican Party controlled the process through the 80's and 90's gerrymandering the state to their advantage. Since 2000 the Democratic Party won control gerrymandering to gain additional seats in the U.S. House of Representatives from Republicans in the 2012 election more effectively representing the demographics of the state.[7][8][9] Nonetheless, Republicans are customarily represented by officeholders in certain districts.[10]

The Cook County Democratic Party represents Democratic voters in 50 wards in the city of Chicago and 30 suburban townships of Cook County. The organization has dominated County, city, and state politics since the 1930s. The last Republican mayor of Chicago was William Hale "Big Bill" Thompson, who left office in 1931 with a record of corruption. The high-water mark for Republican candidacies for mayor since then was that of Republican candidate Bernard Epton, who in 1983 came within 3.3 percentage points of defeating Democrat Harold Washington.[11]

In March 2008, the County Board increased the sales tax by one percent to 1.75 percent. This followed a quarter-cent increase in mass transit taxes. In Chicago, the rate increased to 10.25 percent, the steepest nominal rate of any major metropolitan area in America. In Evanston, sales tax reached 10 percent and Oak Lawn residents pay 9.5 percent.[12] On July 22, 2008, the Cook County board voted against Cook County Commissioner's proposal to repeal the tax increase.[13]

To establish more localized government control and policies which reflect the often different values and needs of large suburban sections of the sprawling county, several secession movements have been made over the years which called for certain townships or municipalities to form their own independent counties.

In the late 1970s, a movement started which proposed a separation of six northwest suburban townships, Cook County's panhandle (Barrington, Hanover, Palatine, Wheeling, Schaumburg, and Elk Grove) from Cook to form Lincoln County, in honor of the former U.S. president and Illinois resident.[14] It is likely that Arlington Heights would have been the county seat. This northwest suburban region of Cook is moderately conservative and has a population over 500,000. Local legislators, led by State Senator Dave Regnar, went so far as to propose it as official legislation in the Illinois House. The legislation died, however, before coming to a vote.

In 2004, Blue Island Mayor Donald E. Peloquin organized a coalition of fifty-five south and southwest suburban municipalities to form a new county, also proposing the name Lincoln County. The county would include everything south of Burbank, stretching as far west as Orland Park, as far east as Calumet City, and as far south as Matteson, covering an expansive area with a population of over one million residents. Peloquin argued that the south suburbs are often shunned by the city (although Chicago is not bound or required to do anything for other municipalities) and he blamed the Chicago-centric policies of Cook County for failing to jumpstart the somewhat-depressed south suburban local economy. Pending sufficient interest from local communities, Peloquin planned a petition drive to place a question regarding the secession on the general election ballot, but the idea was not met with success.[15]

Talk of secession from Cook County amongst some outlying communities again heated up in mid-2008 in response to a highly controversial 1% sales tax hike which has pushed the tax rates across the county communities up amongst the highest in the nation. Some border towns in particular had been outraged, as people can take their business across the county border (paying, for instance, 7% in Lake County instead of Palatine's 9.5%).[16] The secession issue eventually died down from the nominal tax increase.

In 2011, two downstate Republican state representatives, Bill Mitchell of the 87th district and Adam Brown of the 101st district, proposed statehood for Cook County. Mitchell said that Chicago is "dictating its views" to the rest of the state and Brown added that Chicago "overshadows" the rest of Illinois.[17] 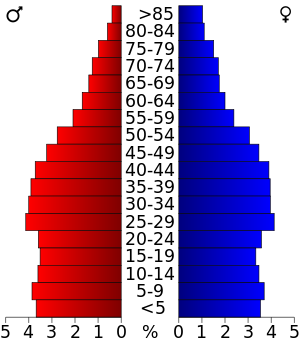 The county is divided into 30 townships, in addition to the City of Chicago.

Chicago's eight former townships and annexed parts of others no longer have any governmental structure or responsibility since their annexations, but their names and boundaries are still used on property plats and by Cook County for tax assessment purposes.